Pokémon-Go, the Zombie Apocalypse and the C.I.A. 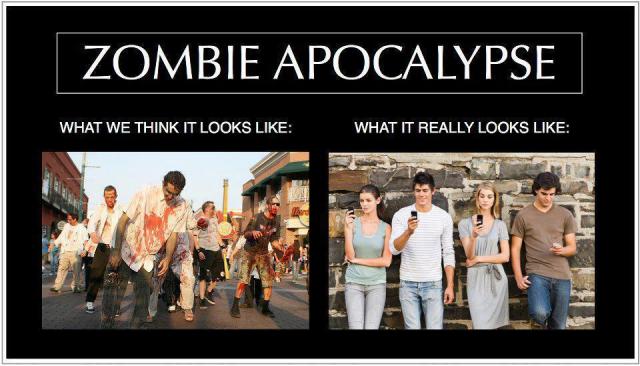 Nothing can make you feel older than watching a bunch of adolescent teens wondering around the neighborhood staring at their phones looking for Pokemon-Go monsters.  I no longer fear the zombie apocalypse for I have seen it with my own eyes.  Empty headed dead brained children stumbling along into lakes and falling over ledges, curbs and tree stumps looking down intently at their $400 phones searching far and wide to capture Pokémon.

The smart phone technology is now ubiquitous (well not quite; I still have a flip phone!) and has been transformed into the ultimate weapon to (a) sell you shit and in a more sinister direction (b) to spy on all of us.  More like Pokemon-See-Everything.

When you sign on to “play” Pokemon-Go you agree to the “privacy policy.”  Based on the access to your device (and your information), coupled with the design of Pokémon Go, the game should have no problem discerning and storing the following information (just for a start):

Where you are, where you were, what route you took between those locations, when you were at each location, how long it took you to change locations, what you are looking at right now; what you were looking at in the past and what you look like, what files you have in your network and the content of those files.

Nice. The perfect spy on you “game” of mass surveillance.

“We may provide any information about you (or your authorized child) that is in our possession or control to law enforcement or government officials or to private parties.”

I can hear it now – “Poor old Toritto is getting paranoid!”

Well one need only look at where this “game” came from (it’s history is readily available on line) and exactly who was involved in its development.

Pokemon Go was made by Niantic Inc. Niantic Inc is a company that was formed by Keyhole Inc. Keyhole Inc was a company that received investment capital from In-Q-Tel (that also invested in Facebook) which is THE VENTURE CAPITAL FIRM OF THE CENTRAL INTELLIGENCE AGENCY. So, when you’re playing your stupid Pokemon Go game just know you are helping the CIA domestically spy on American citizens.

In-Q-Tel is the venture capital firm of the CIA. Yes, the Central Intelligence Agency. Much of the funding purportedly came from the National Geospatial-Intelligence Agency (NGA). The NGA handles combat support for the U.S. Department of Defense and provides intelligence to the NSA and CIA, among others.

Over the next few years, Niantic created two location-based apps/games. The first was Field Trip , a smartphone application where users walk around and find things. The second was Ingress, a sci-fi-themed game where players walk around and between locations in the real world.

In 2015, Niantic was spun off from Google and became its own company. Then Pokémon Go was developed and launched by Niantic.  It’s a game where you walk around in the real world (between locations suggested by the service) while holding your smartphone.

Who is the mastermind behind all this?  Meet John Hanke.  founder of Pokemon GO’s Niantic Labs, which in turn was a startup absorbed by Google.

Prior to founding Niantic Labs,  Hanke was the CEO of mapping company Keyhole, Inc. through funding from the CIA’ in 2001. Keyhole was later bought by Google in 2004.   Since IQT funded Keyhole, Inc., and Keyhole’s CEO setup Niantic Labs that created Pokemon GO, there couldn’t be a clearer indication of CIA influence over the latest phenomenon to capture the world’s attention. But it’s not just the CIA.

“Pokemon GO was founded on mapping technology created by a company that has the backing of both the CIA and the NSA. The technology was used by the US military in the Iraq war, and it later became integrated into Google Maps.

Pokemon GO runs on Augmented Reality (AR), and  “For those unfamiliar with ‘augmented reality’ gaming, it’s a type of game where one tracks virtual characters or objects that appear on their smart phones through real world environments.”

Those “real world environments” are also tracked using Google Maps technology, so while users meandering in droves to catch Pikachu, the company is tracking their every move.

Pokemon GO was built on the back of the CIA-funded IQT, and just as IQT’s mission statement declares, the technology was built “to support the missions of the Central Intelligence Agency and broader U.S. Intelligence Community.”

So as you’re “catching ‘em all” with all the other sheep, you very well may be creating a cache of high-res, data-rich images to get siphoned directly into the CIA’s greedy little pockets.

Or perhaps there is some meeting of anarchists going on and the CIA wants photos of it, or photos of the cars around it and their plates, or photos of the people coming in and out. Meaning that, should the Director of the CIA need eyes somewhere, all he as to do is tell the game to stick a Pikachu or two in the room and the area  and some unassuming schlubs will send him pictures in real time in no time.

Just because you’re paranoid doesn’t mean you’re not being watched.  Those teens walking by just sent my picture to the government.  Now they know exactly where I am at this moment.  And 2nd amendment folks think that just because they have lots of guns they can fight the Gummit.

Putin has banned it in Russia for the connections to the CIA.

11 Responses to Pokémon-Go, the Zombie Apocalypse and the C.I.A.