I grew up in Brooklyn.  Most of you know that.  One of the good things about growing up in Brooklyn was the contact with the numerous other cultures and peoples living there.  It was the land of immigrants from everywhere.  It still is.

My neighborhood was a “little Italy”.  It was one of many “littles” – the places where those coming from somewhere else found their roots.

My girl, the woman I would marry in 1963, went to a high school filled with Italian kids – as well as Norwegian kids and Syrian kids.  One of her best (and best looking!) girl friends was a Syrian.

All of us hung around in the same soda shoppes and drive-ins on Saturday nights and got to know each other and families well.

How many were the tales of Aleppo and Damascus, of Beirut and Khalil Gibran heard from Arab grandfathers to go along with stories of Bari and Messina, Reggio and Garibaldi.  Many of the “Syrians” came from Iraq, Jordan or Lebanon but identified as Syrians.  Today the new faces in Arab Brooklyn are the Yemenis.

Arab Brooklyn still exists along Atlantic Avenue where the coffee is thick and sweet and the meat halal; the pastry tasting of pistachio, honey or rose water.

I was always right at home in Arab Brooklyn as they were in Italian Brooklyn.

Many a time my future father-in-law would take the bus before an upcoming holiday to visit Alwan’s Bakery, bringing home several boxes of Arab pastry and baklava.  His daughter and I would later follow in the footsteps he left for us.

The center of Syrian life in Brooklyn was the Syrian Young Men’s Association, the SYMA.  SYMA is still located in Brooklyn Heights: on Atlantic Avenue, which many people see as the center of Arab Brooklyn.   I hear that the real energy today comes from Bay Ridge, where more  recent generations of Arab immigrants have settled.

In the 1960s, SYMA took on more of a citizens’ watchdog  role, protesting gentrification plans that would have driven working and middle-class Arab American New Yorkers out of Brooklyn Heights.

SYMA today is a place “where the men are not necessarily young or Syrian, but do share a taste for the thick coffee that used to be available up and down Atlantic Avenue”

Yet Arab Brooklyn remains as do some of the the shoppes where we bought our pastries fifty years ago.   “As late as 1974 one could still walk into the back room of Mahmoud Alwan’s pastry shop and experience a small shudder of excitement as if one were stepping out of the glaring street into the dappled light of the Damascus suq. Under a skylight stood a large, bald man in a white apron, his eyes intent on an enormous cauldron of hot oil into which he flicked small dollops of dough with a spoon. “He knew how to flick it just right,” recalls a neighbor. Skimmed off at the right moment and drenched in sugar syrup, Alwan’s ‘awwamat tasted other-wordly.”

Each year SYMA would hold a dance to raise money for local charities.  And each year with our Arab friends my young wife and I would attend along with many other non-Arabs.  And we would dance the night away highlighted by Arab music  and Syrian women, young and old, with scarfs attached to a ring on their finger, dancing and whirling, doing the dabke as our women did the tarantella, forgetting the problems, the differences. the sorrows as we celebrated life and our common humanity in our new country.

Lately I have been feeling for those Syrians trudging on the roads;  for you see, though I do not know them, I have danced with them. 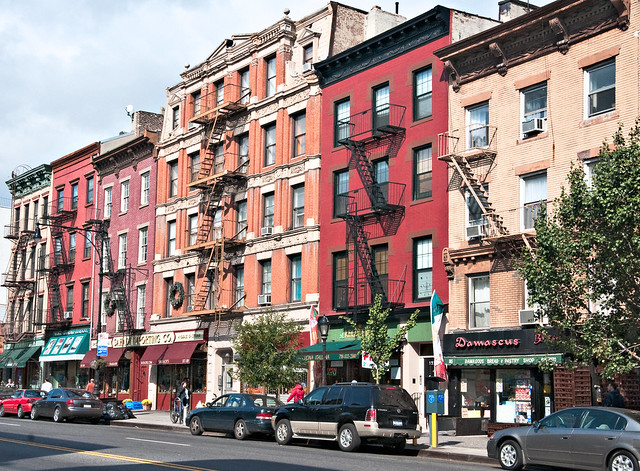 I was born during year four of the reign of Emperor Tiberius Claudius on the outskirts of the empire in Brooklyn. I married my high school sweetheart, the girl I took to the prom and we were together for forty years until her passing in 2004. We had four kids together and buried two together. I had a successful career in Corporate America (never got rich but made a living) and traveled the world. I am currently retired in the Tampa Bay metro area and live alone. One of my daughters is close by and one within a morning’s drive. They call their pops everyday. I try to write poetry (not very well), and about family. Occasionally I will try a historical piece relating to politics. :-)
View all posts by toritto →
This entry was posted in family and tagged Al=Wans bakery, Arab Brooklyn, Arabs, Atlantic Avenue, Brooklyn, current events, Little Italy, refugees, SYMA. dance, Syrian Young Mens Association, Syrians. Bookmark the permalink.

4 Responses to Dancing with Syrians