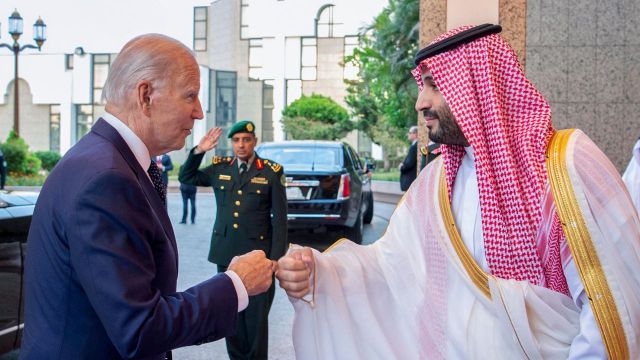 Saudi Arabia has executed 12 people in 10 days for drug offences after a two-year hiatus, according to a human rights organization. The spate of executions – most of which are beheadings with a sword – is part of a wider trend that suggests the country is on track for a record year of executions despite Crown Prince Mohammed bin Salman previously vowing to reduce the use of such punishments.

The defendants, all males, were sentenced to death after being imprisoned on non-violent drug charges. Three were Pakistani, four Syrian, two Jordanian and three Saudi. Another man from Jordan is believed to have been transferred to the wing for executions on Friday.

That brings the total number of people executed this year to at least 132, exceeding those of 2020 and 2021 combined.

President Biden should visit Prince Salman again, do the fist bump and kiss his ass.

Activists said in the wake of the journalist’s murder there was a moratorium on executions in drug cases. According to Saudi Arabia’s Human Rights Commission, 2020 saw the lowest number of executions in decades, decreasing by 85 per cent from the previous year to 27.

But earlier this year 81 individuals were executed for a wide range of offences, including “terrorism”- related crimes, murder, armed robbery and arms smuggling.   “Mohammed bin Salman has repeatedly touted his vision of progress, committing to reducing executions and ending the death penalty for drug offences. But as a bloody year of executions draws to a close, the Saudi authorities have begun executing drug offenders again, in large numbers and in secret.”

Everyone knows MBS is a murderer.  On Thursday, President Biden was accused of shielding Prince Mohammed over Khashoggi’s murder after the US Justice Department ruled that the Saudi ruler had immunity from prosecution.

Civil lawsuits against the Saudi ruler here in America were thrown out.  The latest execution came on the day after it was made official that MBS will face no consequences for ordering the murder of Jamal Khashoggi. Proof once again that when Saudi Arabia’s international partners, including the United States signal that the regime can kill with impunity, the Crown Prince and his subordinates got the message – and act on it.

Why are we allied with such barbarity?   This is the place from whence came the 9/11 killers of thousands.  George Bush held the King’s hand.  Biden fist bumped, forgave murder, couldn’t give a rat’s ass how many are beheaded, practically kissed the ring and begged for oil.

The Saudi monarchy is trying to buy respectability by throwing lots of money at sports.  I’ll wager the house that the idea for the LIV golf tournaments, sponsored by the Saudis, at American and European golf clubs came from Trump.

We all know the reason we are pals with people who behead drug users and publicly whip men and women.  Seems kind of like ISIS.

“After the 2nd WW America told Saudi Arabia, that at that time was just mud huts with no electricity, goats and dates, allow American corporations to develop your oil fields and we will protect you from all enemies. With all that oil they made lots of money but of course they then needed to protect that with arms and equipment supplied by (yes, well done) America. So why does America support Saudi Arabia? Their cheap oil supplies America. All oil is traded in US dollars, so the value of the US dollar is increased. With all those dollars Saudi Arabia can afford to buy the latest expensive toys from America. No one is going to attack the Saudis. It is a situation made with love in Washington.

If there was no oil in SA and Yemen had the oil then today Yemen would be freely bombing civilians, mud huts, goats, birthday parties, weddings and funerals with impunity in Saudi Arabia.”

And why do we demean ourselves as a nation by kissing up to such a regime?

Because Americans feel entitled to $2,50 a gallon gas.  We as a people feel entitled to everything.  Most are too young to remember a time when, with the formation of OPEC, we had no gas.  Thanks to Saudi Arabia.

We really don’t give damn who or how many people he murders chopping off heads so long as our gas prices are low.  As if the record profits of our oil companies have nothing to do with the price.

We should be ashamed of ourselves, But we’re not.  We never are.

6 Responses to Chopping Off Heads