Toritto at the Pyramids – from the Travel archive

So its 1995 and I’m on assignment in Cairo for the Great American Travel Company – for the second time in 4 months.

Last time I was here I made the “mistake” of making a number of recommendations which I thought would create efficiencies at the office. Local management promptly called my boss in New York and asked that I come to Cairo to help implement the recommendations.

My boss was ticked off. She loaned me to Cairo for 5 weeks. 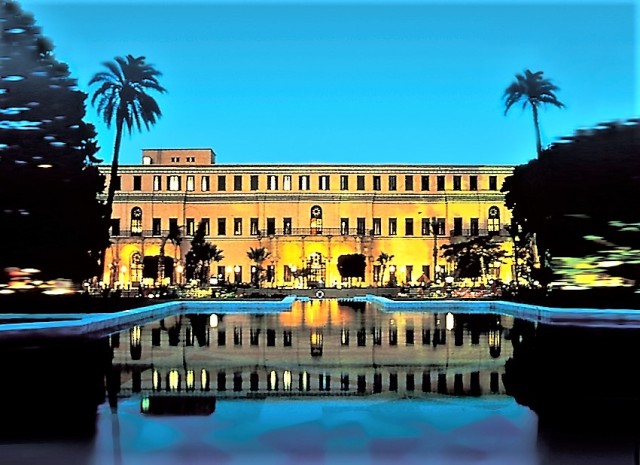 So here I was ensconced in the Cairo Marriott in January 1995.  It was once King Farouk’s palace.  With all these weekends on my hands it was time to see the pyramids.  Close up.  Believe it or not I had been in Cairo numerous times before , commencing in 1966 and had not seen the pyramids!   Tsk tsk.

So as an employee in good standing I dropped in the office of the Great American Travel Company, flashed my employee I.D. card and took a spot on the tour bus. Off we go.

Tour buses and tourists out the wazoo.

I get off the bus and look – my God, they are enormous. You simply cannot visualize how big. The pyramid of Cheops is most likely the largest structure ever built on earth.

One immediately has to fight one’s way passed the trinket sellers, food stalls, and camel jockeys offering you a picture and a ride.

“No thanks. Maybe later on my way back to the bus”.  Trust me. The trinket seller will remember your face on your way back. Hey, everyone has to make a living.

I walk up the Cheops pyramid and gaze up – Approximately 2.4 million blocks of stone each weighing tons. The tallest structure on earth for thousands of years.

I sit on a block and zen the moment. I light a Macanudo Ascot and have a smoke perhaps where Cleopatra held Caesar’s or Antony’s hand and where millions of others have come over the centuries.

I want to enter the pyramid but the Cheops pyramid, the largest, is closed.

Khafre’s pyramid, number two in size is open. The Khafre pyramid actually appears larger because it is built on a more elevated portion of the plateau. So Khafre’s pyramid it is. 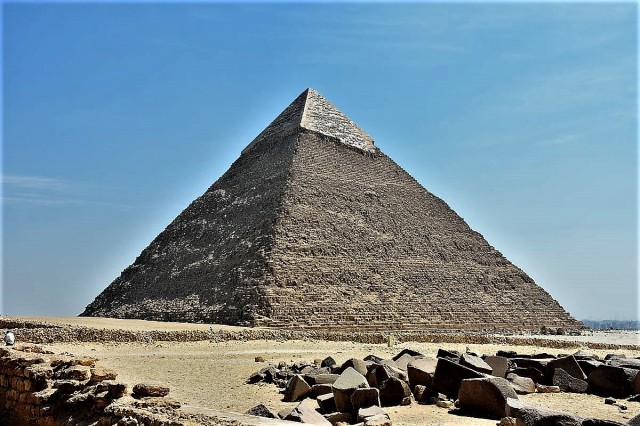 We are organized into small groups so as not to crowd the passageway. Each group will enter, spend a few minutes in the burial chamber and then leave. We are warned. We will have to bend over while walking, there will be a downward slope, a level portion where we can stand up and an upward slope into the chamber. There are metal pipes which will serve as handrails. We will be walking on plywood boards with cross pieces to assist with footing. It is not an easy jaunt for older folks. But hey I’m only 53 – I can do it!

Off we go on the downhill slope, holding on to the bars and careful of our footing and our heads. We are bent over under a low ceiling. The passage is lit by small light bulbs in metal cages. The claustrophobic feeling comes over everyone.

The thought of those tons of rock over our heads brings out the macabre jokes.

We have reached the gallery, the most stunning area on the way to the burial chamber.  On to the level portion of the passage, we can stretch a bit and catch our breath. Then an upward slope and a lighted end to the tunnel – the burial chamber. We step inside.

It is oppressive. It is relatively softly lit.  It feels close and you are very aware that the passageway is the only way out. Nothing but the sarcophagus remains in the room.

The ceiling is vaulted and consists of limestone beams – holding up this space for thousands of years. The room is rectangular – about 15 plus yards by 5 plus yards. There is humidity in this room from the breath of tourists that is absent outside.

On the wall a desecration – the name of Giovanni Balzoni, the Italian who opened the tomb on March 2, 1818. Name and date carved in the wall.  Graffitti plain and simple.

The space is close and stifling.

We go back the way we came, hunched over and walking carefully so as not to fall. Holding onto the handrails.

Light. Then outside.  Breathe deeply.  I didn’t know I had a bucket list.

Now for the trinket men.

I get my picture taken. I buy some Arab garb I would wear to a Halloween party a decade later. I buy a papyrus replica from the Book of the Dead at a nice shoppe where the bus stops.  It hangs in my living room. 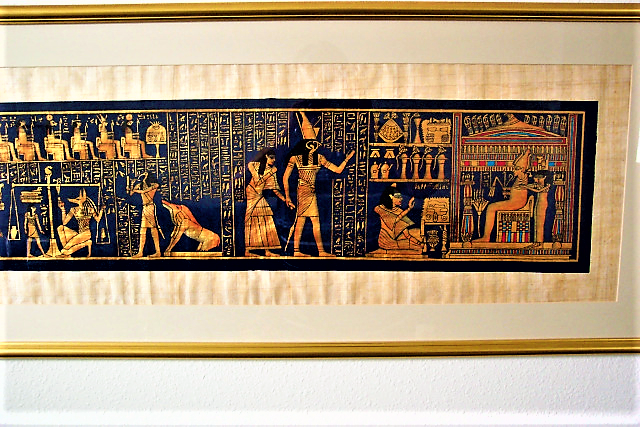 I have walked where the millions have walked – the important and the not so important.  I am one with the infinite.

These Pharaohs wanted to be remembered forever. They are.

We still speak their names.   And I’m writing about them.

I was born during year four of the reign of Emperor Tiberius Claudius on the outskirts of the empire in Brooklyn. I married my high school sweetheart, the girl I took to the prom and we were together for forty years until her passing in 2004. We had four kids together and buried two together. I had a successful career in Corporate America (never got rich but made a living) and traveled the world. I am currently retired in the Tampa Bay metro area and live alone. One of my daughters is close by and one within a morning’s drive. They call their pops everyday. I try to write poetry (not very well), and about family. Occasionally I will try a historical piece relating to politics. :-)
View all posts by toritto →
This entry was posted in travel, Uncategorized. Bookmark the permalink.

1 Response to Toritto at the Pyramids – from the Travel archive