Those of you out there, undoubtedly Republicans, who just knew the warm weather would result in COVID going away were wrong.  Here in sunny, hot and humid Florida, where the temp reached 98 degrees yesterday and was into the nineties all this week saw your favorite bars closed again.  Guess you’ve gotta drink your booze in the yard.

Florida and Texas rolled back their grand re-openings; new cases reached 9,000 more here just yesterday – in one day.  This week a 17 year old girl died in the county in which I live.  No one knows how she contracted the disease or with whom she was in contact.  Our Governor was all hurrahs just a month ago with Florida apparently doing quite well as compared to New York and other hot spots.  As a good Republican, DiSantis announced re-opening while cases were still rising dramatically each day for which he got his photo op with our Great Leader.

This morning even the odious Mitch McConnell wore a mask, announcing “These are important” as he held up a mask and “they are less complicated than a ventilator!”

Too late Mitch.  Now all you have to do is convince Dyed Blond Don and his lackey V.P. Pence to lead.  The Republican administration moved again in the stacked Supreme Court to abolish Obamacare and throw 20 million plus off of their health insurance in the middle of a pandemic.

How cruel can you be?  Pretty cold me thinks.

Our illustrious President, while living in a COVID bunker worries not about contracting the disease while advising his foolish followers that only Democrats wear a mask.  And so his water carriers march about speaking of “freedom” and the First Amendment.  In north Carolina, where a Democratic Governor has tried to mandate the wearing of masks, the Republicans have pointed out that there is a law on the books forbidding the wearing of masks.  It was passed decades ago to specifically target the Klan.  They argue that the Governor can only “suggest” wearing masks but cannot make it mandatory.

Meanwhile of course those high and mighty legislators remain hunkered down with their families.  Kharma can be a bitch.  Let’s us hope.

Here in Florida, our Governor was in a great hurry to re-open in spite of the statistics and number of hospitalizations.  We are a tourist driven economy.  Once the bars and restaurants opened their doors however, the young (now the segment with most new cases) ignored social distancing and mask suggestions.  It was party on dude! 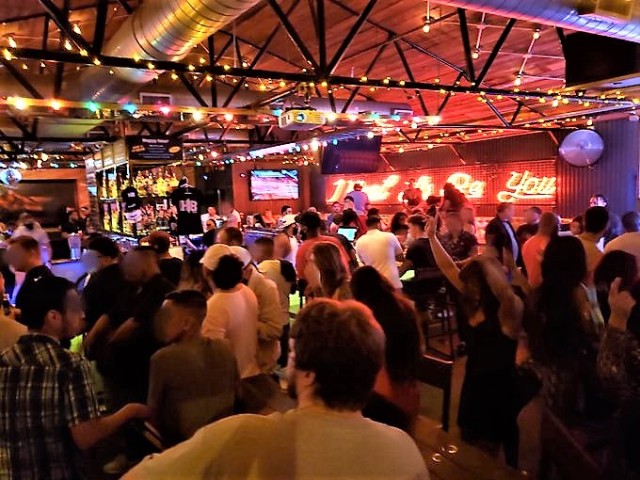 Seems some American males are a truly hopeless bunch; totally clueless.  Its that “Masks are for sissies” thing, as if Dr. Fauci was trying to get you to lose at arm wrestling rather than trying to save your life or that of your mom.  We heard the same shit when seatbelts were made mandatory.

It is quite normal around here for a beach bar or restaurant to have a sign posted to ensure that patrons are at least reasonably dressed and don’t come in directly from an ocean swim.

Today if a business owner also requires a mask, our Trumpers have made it a matter of their “freedom” not withstanding that the business is on private property and applies to all patrons, not just some.  No matter that there is little difference between requiring a shirt and a mask during these difficult times.

Since when has mask wearing become matter of freedom?  Pretty fuckin stupid if you ask me.  Now we regularly hear of fist fights breaking out over the wearing of a mask.

We can thank that moron in the White House.

I’m sure there are people all over the world laughing at us.  It makes one fear for the future of one’s country.

This week I shall render sacrifice to the Goddess Nemesis,  she who enacts retribution against those who succumb to hubris and arrogance before the gods.

AND MAKE SURE YOU VOTE!!

7 Responses to “No Shoes, No Shirt, No Service!”