The Ides of March and Moral Dilemma – A Re-Post 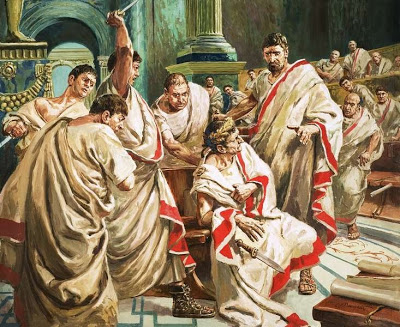 Well happy Ides of March! It was on  Ides (or 15th) of March, 44  B.C. that Julius Caesar was assassinated in the Forum. The day has lived in infamy, as they say, ever since, fascinating scholars, historians and moralists.

Was Brutus the villain or Caesar? The question is still being debated for remember, the victors write the history and Augustus, Caesar’s nephew would be the eventual victor.

For ancient Romans living before that event an ides was merely one of several common calendar terms used to mark monthly lunar events. The ides simply marked the appearance of the full moon.

But the Ides of March assumed a whole new identity after the events of 44 B.C. The phrase came to represent a specific day of abrupt change that set off a ripple of repercussions throughout Roman society and beyond. “The Ides”, as Cicero later wrote “changed everything”.

By the time of Caesar, Rome had a long-established republican government headed by two consuls with joint powers. Praetors were one step below consuls in the power chain and handled judicial matters. A body of citizens forming the Senate proposed legislation, which general people’s assemblies then approved by vote. A special temporary office, that of dictator, was established for use only during times of extreme civil unrest.

The Romans had no love for kings. According to legend, they expelled their last one in 509 B.C. While Caesar had made pointed and public displays of turning down offers of kingship, he showed no reluctance to accept the office of “dictator for life” in February 44 B.C. It is this act which probably sealed his fate.

Caesar had pushed the envelope for some time before his death. He was the first living Roman ever to appear on coinage. Some historians suspect that Caesar might have been attempting to establish a cult in his honor in a move towards deification.

Whether or not Caesar was a true tyrant is debated still to this day. It is safe to say, however, that in the mind of Marcus Brutus, who helped mastermind the attack, the threat Caesar posed to the republican system was clear.

Brutus’s involvement in the murder is made tragic given his close affiliations with Caesar. His mother, Servilia, was one of Caesar’s lovers. And although Brutus had fought against Caesar and with Pompey during Rome’s recent civil war, he was spared from death and later promoted by Caesar to the office of praetor. Caesar seemed to like to cultivate young talent.  On the other hand, maybe Caesar let Brutus live only as a sop to Servilia.

Brutus, however, was torn in his allegiance to Caesar. Brutus’s family had a tradition of rejecting authoritarian powers. Ancestor Junius Brutus was credited with throwing out the last king of Rome in 509 B.C. An ancestor of Marcus Brutus’s mother, had killed another tyrant. This lineage, coupled with a strong Roman interest in the Greek idea of tyranicide, disposed Brutus to have little patience with perceived power grabbers.

The final blow came when his uncle Cato, a father figure to Brutus, killed himself  in 46 B.C.  Cato too, was a supporter of Pompey and, having been on the losing side, committed suicide. It was considered the honorable thing to do.  Brutus may have felt shame over accepting Caesar’s clemency while his uncle killed himself and perhaps felt obligation to do Cato honor by continuing his quest to “save” the republic from Caesar.

It is this moral dilemma that has caused debate over whether or not Brutus should be branded a villain. Plutarch’s Life of Brutus is quite sympathetic when compared to other surviving documents naming Caesar’s enemies.

Shakespeare later used Plutarch’s Brutus as one of the bases for his play Julius Caesar, where Brutus is portrayed as a tragic hero and Caesar as an unequivocal tyrant. The poet Dante, however, took a different stance: Brutus, in killing the man who spared him, was doomed to the lowest levels of hell.

On the other hand there’s a brilliant talk by Michael Parenti on the assassination of Julius Caesar.  I was put on to this video by Dr. Stuart Bramhall; we regularly read each other’s posts.   Parenti believes Caesar was a deliberately demonized by the rich elite for his populist politics.

Indeed Julius Caesar aligned himself with the “Populares”, the organized lower classes formed into a coalition a century earlier by the Gracchi brothers – Rome’s “first socialists”. Brutus, like his uncle Cato was a supporter of the Optimates – the aristocracy.   The Optimates considered Caesar a “demagogue.”

Caesar, like the Gracchi brothers was assassinated by the Optimates. Brutus and his supporters had to flee the Roman mobs after the murder. There is a reason that a conservative think-tank is called the Cato Institute.

Scholars disagree on just who was the on the side of “good.”. Probably neither side is entirely in the clear. We’re dealing with very brutal and ruthless men on both sides.

Brutus and his BFF / brother in law, Cassius Longinus would die at Philippi in Greece fighting against the legions of Octavian and Antony.  Soon they too would be at each other’s throats with Octavian emerging as the Emperor Augustus.

In the end, the Ides became a reminder to future rulers. Octavian seems to have been aware of the problems of presenting himself as Caesar had and The Ides became a lesson in political self-presentation,

So, is it ok to kill a tyrant? How do you know one when you see one?

Interesting questions for another day.

I was born during year four of the reign of Emperor Tiberius Claudius on the outskirts of the empire in Brooklyn. I married my high school sweetheart, the girl I took to the prom and we were together for forty years until her passing in 2004. We had four kids together and buried two together. I had a successful career in Corporate America (never got rich but made a living) and traveled the world. I am currently retired in the Tampa Bay metro area and live alone. One of my daughters is close by and one within a morning’s drive. They call their pops everyday. I try to write poetry (not very well), and about family. Occasionally I will try a historical piece relating to politics. :-)
View all posts by toritto →
This entry was posted in history and tagged Antony, assassination, Brutus, Cassius, history, Ides of March, Julius Caesar, moral dilemma, Octavian, Philippi, Pompey, Servilia, tyrannicide, who is the villain?. Bookmark the permalink.