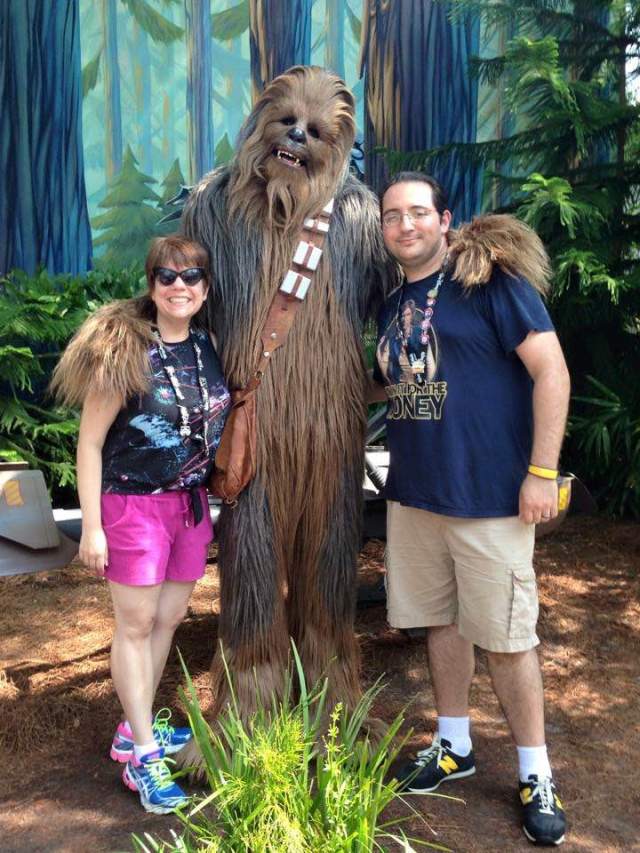 Well tomorrow is the big day the nerds have been waiting for!

We get to see the movie that goes with all those toys, commercials and trailers!

Star Wars nerds are in heaven for on this day, nerds rule!

Now in the name full disclosure we have a Star Wars nerd in our family.  Every family has it’s secrets; ours included.

And I fear she has subverted her loving husband although perhaps he was a secret nerd all along.  On the other hand, perhaps he indulges her nerdness  out of love.

The nerd girl is my eldest daughter who will be wearing her Princess Leia tee-shirt and my son-in-law, in his formal storm trooper gear, with bow tie, to the premier.

Where did we go wrong in our parenting?  These two are both lawyers!

We did play a Vader prank on her on April Fools Day when she was in elementary school.  Abusive parents.

Not only will they be attending the opening -they will attending the Star Wars Marathon – a continuous showing of all six previous Star Wars movies plus the newest film.

The marathon commences at 3 A.M. Thursday morning  and runs for 926 minutes – that’s just under 16 hours plus breaks!   Naturally our two lawyers will be taking a day off from work to attend this monumental event.  If I attended this marathon someone would have to wake me up  when the final installment begins.

Pop online and you can read volumes about surviving a 19-hour plane flight — lots of water, lots of walking — but nothing about being in a movie theater for three-quarters of a day.   Is coffee a good idea? Is there such a thing as too much popcorn?  Should one bring a pillow?

And then of course one must eat, stay hydrated, walk around between flicks and manage one’s bladder.  Movie marathons are not good for deep vein thrombosis.  As Yoda might  say – “Know yourself.”

A can of Red Bull or Jolt Cola might get you over the slow humps.  But don’t overdo it.  One the other hand there is great shame among the nerds if you fall asleep.  Although it is ok to sleep during any scene with Jar Jar Binks.

P.S. – my daughter has informed me that her husband was a total Star Wars nerd when they met.  It was part of the mutual attraction!

.
“THE PHANTOM MENACE” (1999): You can take a nap from the first Jar Jar Binks scene until the final lightsaber battle and you won’t miss a thing. 133 minutes.
‘”

ATTACK OF THE CLONES” (2002): When Hayden Christensen’s whining gets to be too much — and it will — grab breakfast. Just be back for Yoda and Count Dooku’s ‘reunion. 142 minutes.

“REVENGE OF THE SITH” (2005): The best of the prequels — and that’s not saying much — gives us the Emperor vs. Yoda showdown you never knew you wanted. 140 ‘minutes.

“THE EMPIRE STRIKES BACK” (1980): Lawrence Kasdan’s snappy dialogue, a director who isn’t George Lucas and the best response to “I love you” in cinema ;history. Expect all the seats to be filled. 124 minutes.

“THE FORCE AWAKENS” (2015): Finally, you get to see the movie that goes with all those commercials and toys. 135 minutes.