When is a Duck a Duck? 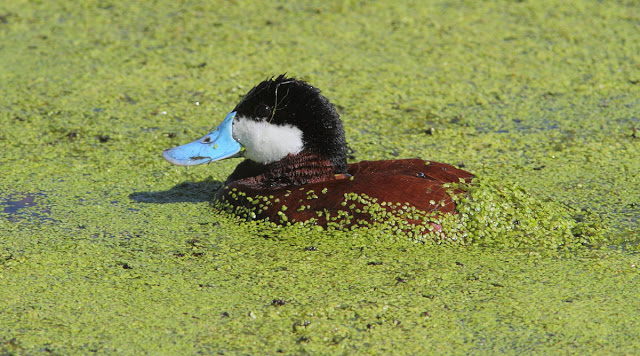 So you see something in the tall grass of the wetlands but you can’t quite make out what it is.  It sounds like a duck but you don’t want to jump to conclusions.  You wait awhile until you can see it better.

You see a flash of color.  Looks like a duck but still you are not quite sure.

How much information is necessary before you can make a reasonable determination that it is a duck?

This week we had some noises from my paisano Antonim Scalia:

“There are those who contend that it does not benefit African-Americans to get them into the University of Texas, where they do not do well,” Scalia said, “as opposed to having them go to a less-advanced school … a slower-track school where they do well.”

He went further: “They come from lesser schools where they do not feel that … they’re being pushed ahead­­ in classes that are too fast for them,”

“I don’t think it stands to reason that it’s a good thing for the University of Texas to admit as many blacks as possible.”

We Italian Americans are so proud.   Justices Scalia and Alito are the highest ranking sons of Italy in America- and they are both “ducks”.

Meanwhile Donald Trump continues to lead the pack among likely Republican primary voters with a 2 to1 lead over the second place duck, Texas Senator Cruz.  Trump has 34% in the most recent poll which also gives him high marks for his “strong” stand on terrorism and immigration.

Donald the Duck this week proposed banning all Muslims from entering the United States and would not rule out “internment camps.”   The MSM really should call them what they are – concentration camps.  He had already proposed registration of all Muslims in America and surveillance of all mosques.  He has already decided to round up all undocumented Mexicans and send them back – all ten million plus of them.

None of the ducks denounced his remarks – only those establishment Republicans with poll numbers in single digits, who don’t really matter cause none of the extreme right is listening to them.

The Republican party is now reaping the whirlwind of its policies since the defeat of John McCain who now looks like a statesman of the highest order.  Considering the current crew of candidates, Mitt Romney might be able to win the nomination in a walk.

The Republicans have pandered to the right wing crazies for decades; Faux News is the only place some of these folks get their propaganda.  Now they are in the process of pushing aside the establishment pols, supporting candidates like duck Trump which the party pros fear will lead to disaster in the national elections, a Hillary Clinton presidency and the destruction of the Republican Party as we have known it.

The G.O.P. in the House and Senate is filled with those who are essentially anti-government; who believe that “government is the problem” and needs to get out of the way.  The party does not want to govern -it is obstructionist.  And it doesn’t want anyone else to govern either.

Duck Trump is a representative of his class – a billionaire born with a golden spoon in his mouth.  He is an arrogant bully and a misogynist of the first order.  Everyone who disagrees with him is stupid, fat or ugly.  Last week his supporters roughed up a protester at one of his rallies and he laughed it off; after all maybe the protester deserved it.

Meanwhile the gun crazies are out arguing that if we all had guns there might not be any mass killings, ignoring that we are the most heavily armed nation on earth and therefore we should be the safest.

We have seen similar ducks in the past – in Weimar when the National Socialists became the largest party in the Reichstag but would not form a coalition in order to govern – they only obstructed and subverted government until it failed.  And they had a scapegoat for the nation’s problems.

And when they finally got power they opened the camps, registered  and interned the “other”, who were not German as Muslims are not American.  Their racism came out into the streets, the government and the court system as the militarists planned future war and they warned that the “other” was polluting the nation and a danger to the future,

They wanted to make Germany great again.  Find and register those Jews, watch them and watch their synagogues.  No.  Burn them.

How much do we have to hear before we call the ducks what they are?

They are fascists.  We Italians know the bird’s call  when we hear it.

OK – maybe he is not technically a fascist  . Rather, he’s a right-wing populist, or perhaps an “apartheid liberal” in the words of Roger Griffin, author of The Nature of Fascism.

At least not yet.

“He’s simply a racist who wants to keep the current system but deny its benefits to groups he’s interested in oppressing.”

I was born during year four of the reign of Emperor Tiberius Claudius on the outskirts of the empire in Brooklyn. I married my high school sweetheart, the girl I took to the prom and we were together for forty years until her passing in 2004. We had four kids together and buried two together. I had a successful career in Corporate America (never got rich but made a living) and traveled the world. I am currently retired in the Tampa Bay metro area and live alone. One of my daughters is close by and one within a morning’s drive. They call their pops everyday. I try to write poetry (not very well), and about family. Occasionally I will try a historical piece relating to politics. :-)
View all posts by toritto →
This entry was posted in Uncategorized and tagged affirmative action. guns, ban on muslims, crazies, Cruz, fascists, republican presidential prsimaries, Scalia, Supreme Court, Trump. Bookmark the permalink.

6 Responses to When is a Duck a Duck?