Most of you who waste your precious time reading me know that I live in a semi-rural area north of Tampa Bay.  I’m actually only 29 miles from the Tampa International Airport but my eldest daughter thinks I live in the boondocks.  The area is less rural than it was ten years ago.  We now have a food market, two gas stations, a liquor store and a Dunkin Donuts only minutes away.  Positively bustling.

The history of this area makes for some interesting reading.

Spanish explorers arrived in Bahia Tampa in 1520.  They found a prosperous native American culture; the Tocobaga, living on the coast of the bay and the Gulf of Mexico.

The Spanish, as usual, were looking for gold and converts.  Expeditions led by Pánfilo de Narváez and Hernando de Soto landed near Tampa, but neither conquistador stayed long. The native inhabitants repulsed any Spanish attempt to establish a permanent settlement or convert them to Catholicism.

The newcomers however brought with them infectious disease, resulting in a total collapse of the native cultures of Florida. The Tampa area was depopulated and ignored for more than 200 years.

Florida was first controlled by the Spanish, then the British from 1763 – 1783 and then the Spanish again.  Each European power had primary interest in the Atlantic coast; the Gulf Coast was a backwater, a place of rampant Yellow Fever.

In the mid-18th century, events in American colonies drove the Seminole Indians into northern Florida along with escaped slaves from southern states.  During this period, the Tampa area had only a handful of residents: Cuban and Native American fishermen.

After purchasing Florida from Spain in 1821, the United States built forts and trading posts in the new territory.  Fort Brooke was established in January 1824 at the mouth of the Hillsborough River on Tampa Bay, in what is now downtown Tampa.  Tampa was initially an isolated frontier outpost.  The sparse civilian population practically abandoned the area during the Second Seminole War from 1835 to 1842.  Settlers eventually returned but there were still more military personnel than civilians.

During the Civil War, Florida seceded along the southern states to form the Confederate States of America, and Fort Brooke was manned by Confederate troops. Martial law was declared in Tampa in January 1862, and Tampa’s city government ceased to operate for the duration of the war.  Tampa Bay was blockaded by the Union navy and a couple of skirmishes were fought around Fort Brooke.  Florida was occupied after the war by Union troops.

Fort Brooke was decommissioned and all traces of it are gone save for two cannon on display in a downtown park.

Henry B. Plant’s narrow-gauge South Florida Railroad reached Tampa and its port in late 1883, finally connecting the small town to the nation’s railroad system after years of efforts by local leaders. Previously, Tampa’s overland transportation links had consisted of sandy roads stretching across the Florida countryside. Plant’s railroad made it much easier to get goods in and out of the Tampa Bay area.

The discovery of phosphates in the Bone Valley southeast of Tampa along with the railroad suddenly turned Tampa in a boom town; by 1900 it was the largest city in Florida.

The railroad and our famed humidity also brought the cigar industry to Tampa.  Vincente Ybor, a prominent Spanish-born cigar manufacturer left Cuba and eventually set up operations in Tampa; the area is now known as Ybor City.

Tampa did not possess a workforce able to man the new factories. To attract employees, Ybor built hundreds of small houses for the coming influx of mainly Cuban and Spanish cigar workers, many of whom followed him from Cuba. Other cigar manufacturers, drawn by incentives provided by Ybor to further increase the labor pool, also moved in, quickly making Tampa a major cigar production center.

Italians were also among the early settlers of Ybor City. Most of them came from a few villages in southwestern Sicily.

Today Tampa is the fourth largest statistical metro area in the southeastern U.S., after Miami, Washington and Atlanta.  Tampa was ranked as the 5th best outdoor city by Forbes in 2008. Tampa also ranks as the fifth most popular American city, based on where people want to live, according to a 2009 Pew Research Center study.  A 2004 survey by the NYU newspaper Washington Square News ranked Tampa as a top city for “twenty somethings”.

We have a baseball team, the Rays, currently in first place.  We have a hockey team, the Lightning, Stanley Cup finalist.  We also have the Buccaneers, 2-14 last season but with the first pick in the NFL draft.  The Bucs are owned by the same folks who own Manchester United.

We are the lightning capital of the U.S.  Lots of thunder and bolts in summer.  We are also among the leaders in strip clubs.  We have a pirate festival (Gasparilla) and a Halloween party – Guavaween.   St. Pete and Clearwater have some of the finest beaches in America.

We also have minarets and domes.

When railroad magnate Henry Plant was building railroads, he mused “When you are building a railroad to nowhere, how do you make the journey worthwhile?”

If you’re railroad magnate Henry Plant, in the midst of the sand swamps that would be Tampa, you construct the most astonishingly magnificent hotel of its day, then fill it with treasures from around the world. 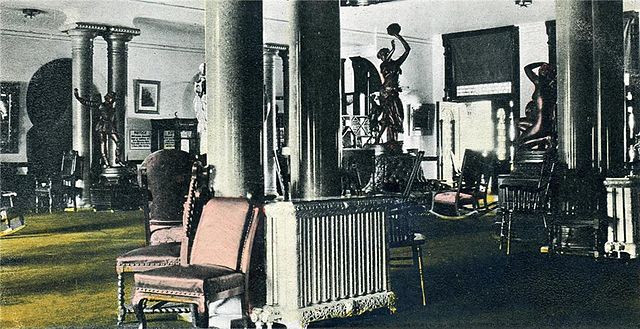 The Tampa Bay Hotel, was a 500+ room resort hotel opened in 1891 near the terminus of the rail line.  The construction cost over 3 million dollars. The hotel itself covered 6 acres and was a quarter-mile long. It was equipped with the first elevator ever installed in Florida. The elevator is still working today, making it one of the oldest continually operational elevators in the nation. The 511 rooms and suites were the first in Florida to have electric lights and telephones. Most rooms also included private bathrooms, complete with a full-size tub. The price for a room ranged from $5.00 to $15.00 a night at a time when the average hotel in Tampa charged $1.25 to $2.00. The poured-concrete, steel-reinforced structure of the building was advertised as fireproof.

The grounds of the hotel spanned 150 acres and included a golf course, bowling alley, racetrack, casino and an indoor heated swimming pool.  In all, 21 buildings could be found on the hotel’s campus. The “Moorish Revival” architectural theme was selected by Mr. Plant because of its exotic appeal to the widely traveled Victorians who would be his primary customers. The hotel has six minarets, four cupolas, and three domes. In the early 90’s, all were restored to their original stainless steel state.

Colonel Teddy Roosevelt and his Rough Riders were at the hotel before sailing for Cuba.  Other visitors of note during the hotel’s heyday were Sarah Bernhardt, Clara Barton, Stephen Crane, the Prince of Wales. Babe Ruth was also a guest of the hotel during its latter days, and signed his first baseball contract in the Grand Dining Room. In 1919.

Today the old hotel buildings and grounds form the campus of the University of Tampa and Plant Park.

I was born during year four of the reign of Emperor Tiberius Claudius on the outskirts of the empire in Brooklyn. I married my high school sweetheart, the girl I took to the prom and we were together for forty years until her passing in 2004. We had four kids together and buried two together. I had a successful career in Corporate America (never got rich but made a living) and traveled the world. I am currently retired in the Tampa Bay metro area and live alone. One of my daughters is close by and one within a morning’s drive. They call their pops everyday. I try to write poetry (not very well), and about family. Occasionally I will try a historical piece relating to politics. :-)
View all posts by toritto →
This entry was posted in history and tagged British, domes, Florida, Fort Brooke, Henry B. Plant, history, minarets, Plant Park, railroad, Spanish, Tampa, Tampa Bay Hotel, Tocobaga, University of Tampa. Bookmark the permalink.