Mary and Danny – A Love Story for Mother’s Day 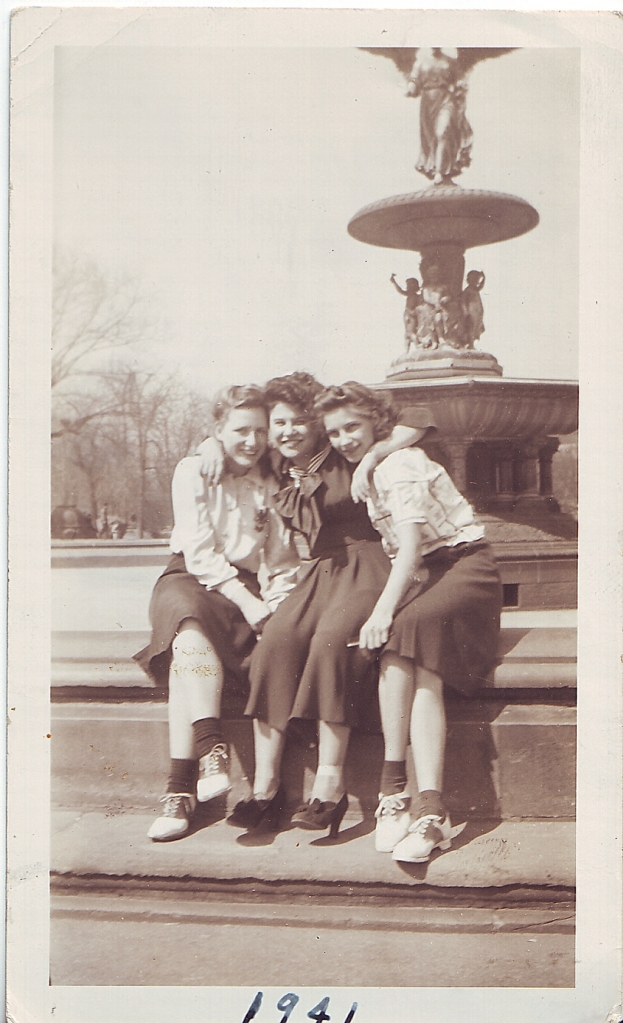 Mary (center) with her girl friends in Central Park just before having to leave the orphanage – in her orphanage clothes – the date in her own hand.

It was 1941 and Mary was sitting on the curb at 77th street and 13th avenue in Brooklyn with her little suitcase beside her. She didn’t know what to do. She had her high school diploma and having turned 18 had to leave the orphanage in Tarrytown where she had been living since her mother died.  After her mom’s passing the state would not permit a single immigrant man to care for five children alone.  Her father had eventually remarried the Wicked Witch but never took his 5 kids out of state care. Now when she showed up from the orphanage he refused to take her in. She was on her own.

She had a few bucks, no job and couldn’t drive. She thought about finding her older brother Joe.

“Mary!  What are you doing sitting here?” It was Laura from across the street. Laura and Francesco lived over the fruit and vegetable store, After a brief conversation Laura didn’t hesitate. “You come stay with me!” And so Laura and Mary went up to Laura’ and Ciccio’s apartment. 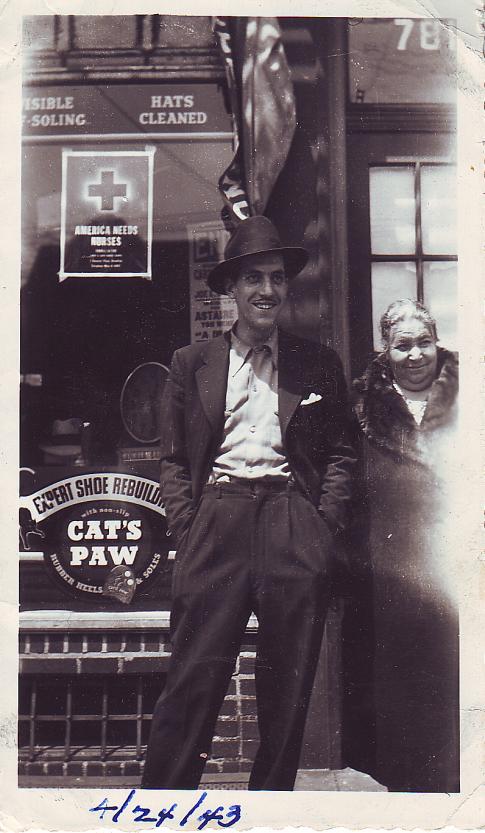 Living with them was their youngest son Domenico. Everyone called him Danny. He was 24 and quite good looking in that Italian sort of way. Slender, muscular and dark with a pencil mustache. Danny had only one problem.

Epilepsy. Danny had been hit by a car while riding his bike as a child and suffered a head injury. At least so I was told a long time ago by those who would know.  Maybe it’s true.  Maybe not.

Epilepsy was something one never talked about in those days.

The general attitude of people at the time was (a) its hereditary – or worse – contagious ; (b) it was associated with “feeble mindedness” and violence and (c) many thought those with epilepsy needed to be institutionalized.

Many states would not permit those with epilepsy to marry. (Missouri was the last to repeal this law in 1980!). Blood banks wouldn’t take your blood until 1987.  Employers would fire you after the first seizure on the job.  General practitioner physicians had little to offer you and patients were afraid they would be reported to the health department.

Danny had to leave school after the 8th grade.  No epileptics allowed.

So here we had a girl whose self esteem had been shattered when her own father wouldn’t take her in and a young man with no self esteem at all. Two lost souls.  These two found each other. Sometimes I suspect Laura knew a match when she saw one all along.  I will never know.

After a few months however Laura put her foot down. Mary’s baby sister,   my aunt T, still alive,bless her,  tells me Laura would not have the neighbors talking about her family.   Laura made it clear to Danny – marry her or Mary will have to leave the house.  Laura couldn’t have a single woman living in the same apartment permanently, especially when the girl’s father lived across the street.  Danny asked. Mary accepted.

So on November 25, 1941 Domenico and Mary married at St. Bernadette’s R. C. Church, where I would be baptized and eventually married.

It must have been a cold January. I was born the following September..

After my birth Danny and Mary got their own three room apartment on 66th street and 13th avenue.  It was one large kitchen with a sink, “pantries” and a Franklin Stove,  a “master bedroom” separated from the kitchen by “French doors” and a 2nd bedroom eventually for me and my brother who came along 4 years later.

Danny took a job as a “hod carrier”, a common laborer,  for an Italian construction company. It was the only job an immigrant with an 8th grade education and epilepsy could get.  He worked hard and they didn’t fire him after a seizure. He kept his epilepsy relatively controlled by taking phenobarbitol and dilantin supplied to him without prescription by a childhood friend who became a pharmacist and owned his own drug store on 78th street.  I usually got sent in to pick up the drugs. “My daddy says he needs the red and white pills and the white pills too please!” Nobody would suspect the kid. My father never saw a specialist; he couldn’t afford it.   He medicated himself.  Sometimes I would notice his glassy eyes.

I never knew of his illness until I was 12 and saw my father seize. It was the first time I saw him cry because it happened in front of me.  I was told by my mother to say nothing in school nor to my brothers.  Now I understood why he missed the war and got sent home from a CCC camp in California.

In the late ‘40s we would go on “picnics” to Hempsted Lake State Park on Long Island.  It was free entertainment. “Picnics” is probably not the right word.  What would you call it when you and the rest of the family pile into three cars and bring tomato sauce, make spaghetti on a giant stone barbecue, roast Italian sausage and pork livers, fruit, nuts, pastry, espresso  etc.

Danny had a ‘32 Plymouth 2 door coupe – black with blue pinstripes. It was immaculate and it was his pride and joy. The front seats flipped up so we kids could climb into the back seat. We were now three kids  and Mary held our new brother on her lap. The Belt Parkway had recently opened and it was an easy drive on near empty roads from Brooklyn to the “country”.

We were coming home in the Summer of ‘49 from a great day in Hempsted, exiting at Bay 8th Street.  As we approached the light at Bath Avenue it turned red and the car nearest the light suddenly stopped. The three cars behind collided in minor fender benders. Danny was the last. He swerved and only broke a headlight.

Mary was holding baby Nicholas.  With the sudden stop her seat pivoted upward toward the windshield.  There were no seat belts nor car seats in those days and the 1932 Plymouth had no safety glass. Mary held Nicholas, covering him with both of her arms….and her face went through the windshield……and then came back.

Nicholas was safe but Mary was cut to ribbons. There was blood everywhere (I still remember).   People ran out of their houses with white towels to stanch the blood until the ambulance got there. I remember sitting on a wooden bench at Coney Island Hospital while the doctors tended to Mary until my Aunts came to the hospital to take me and my brothers home.

My mom was scarred for life and lost a number of teeth. There was no money for plastic surgery if it existed at the time.  She was 24 years old.

When I was 14 my father was able to buy us a little “bungalow” on a dirt street on the outskirts of Coney Island.  It wasn’t much of a house, even by the standards of the day.  It cost $5,000 and the sellers held the mortgage privately.  Today it is under the parking lot of a Home Depot.

Through all the years I never saw or heard them argue.  I never heard an unkind word pass between them.  Through all the troubles and heartaches they remained happy and devoted to each other.  And they were good parents to their sons.   Poppa worked hard at his unskilled but unionized job and we always had a roof over our heads, hand-me-down clothes and food on our table.  His union membership ensured he was paid a living wage.  Eventually he got union health insurance.   Momma was always home for us whether for an after school snack or a bandaid on a scraped knee.

Mary would be dead at 43 in 1966. She died from diabetes and heart disease which she developed after the birth of her three sons. Two of her brothers also died from heart disease in their forties.  I got my diabetes at the same age as my mom.  She had cataracts early on and after they were removed she had to wear the coke bottle glasses one wore then.  There were no replacement lenses for the eyes. She was old before her time.

I was in the Army when my mother died. I flew home from Texas when I got the word to come as quickly as possible.  When I first saw her I burst into tears and a nurse had to take me out of the room. “She doesn’t know me!” “No” was the reply. “She waited for you”.

Half an hour later she was gone. She is gone 49 years this last April Fool’s,  My father was never the same without her. Six years later he too was gone ….. at 56.

Some people never get a break in life.  The one blessing mom and dad ever got was finding each other to love and having each other’s company on the journey home. 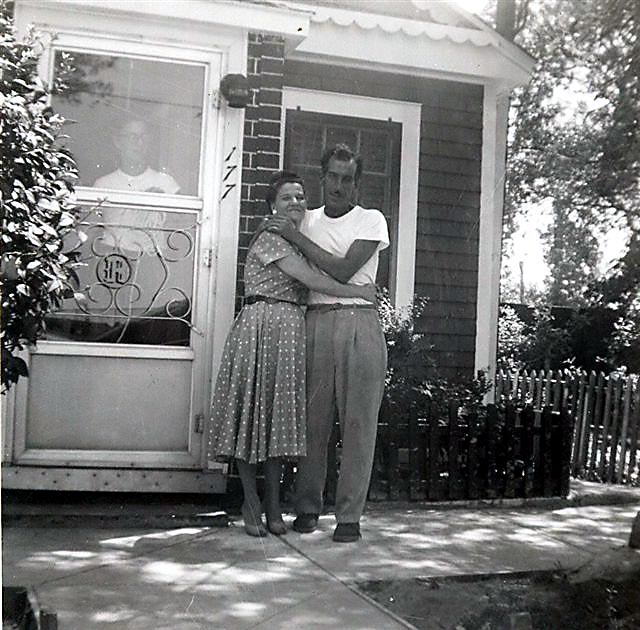 Mary and Danny in our little house on Bay 3rd street – circa 1957.  The ghost behind the glass is me

I was born during year four of the reign of Emperor Tiberius Claudius on the outskirts of the empire in Brooklyn. I married my high school sweetheart, the girl I took to the prom and we were together for forty years until her passing in 2004. We had four kids together and buried two together. I had a successful career in Corporate America (never got rich but made a living) and traveled the world. I am currently retired in the Tampa Bay metro area and live alone. One of my daughters is close by and one within a morning’s drive. They call their pops everyday. I try to write poetry (not very well), and about family. Occasionally I will try a historical piece relating to politics. :-)
View all posts by toritto →
This entry was posted in family and tagged 1940's, dad, epilepsy, family, grandma, love, mom, mother's day, orphanage, poverty. Bookmark the permalink.