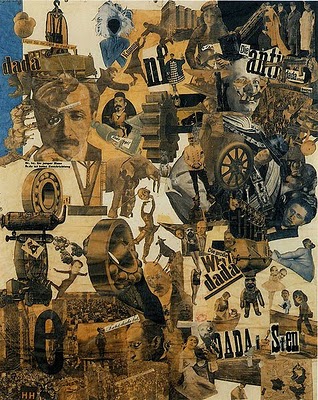 Sipping on her green drink
turning to her girlfriend
her lips move and sound comes out
“Remember that Dadaism
rejected the prevailing standards
of art through anti-art in order to
ridicule the meaninglessness
of life in the modern world;

that to be Dada
was anarchist in nature.”
I’m staring. Is it wrong to stare?
Oh yeah. I love to hear her talk
watch her lips say da-da.
I hope she’s an anarchist.

Girl friend nods and tilts her long neck
“Well now I understand.
See I was having difficulty
grasping neo-Dada
so I decided to go back
to the time before neo.”

Neo thinks I?
No not that Neo as in Matrix
neo as in Dada
sipping on my neo-Corona
watching number one’s breasts
rise and fall.
Did I mention that
I love the way she says da-da?

“Neo is exemplified by the use
of modern materials
popular imagery
and absurdist contrast
patently denying the traditional
concepts of aesthetics.
See?”

Patently absurd.
I love her aesthetics
especially her lips.
Definitely not Dada.
“Since Dada is anti war
anarchist and anti bourgeois
in it can be found the
roots of punk.”

Sid and Nancy Da-da.
Who cares? I think I love you.
“Finally it’s a great help in
understanding
the anti-art sensibility of fluxus”.
Did she just say fluxus?
“Want to get out of here?

I was born during year four of the reign of Emperor Tiberius Claudius on the outskirts of the empire in Brooklyn. I married my high school sweetheart, the girl I took to the prom and we were together for forty years until her passing in 2004. We had four kids together and buried two together. I had a successful career in Corporate America (never got rich but made a living) and traveled the world. I am currently retired in the Tampa Bay metro area and live alone. One of my daughters is close by and one within a morning’s drive. They call their pops everyday. I try to write poetry (not very well), and about family. Occasionally I will try a historical piece relating to politics. :-)
View all posts by toritto →
This entry was posted in Poetry and tagged anarchism, anti-art, art majors, Dada, dadaism, drinking, etchings, neo-dadaism, poetry, punk, what men will do to pick up chicks. Bookmark the permalink.