Child Labor in the Fifties – (smiley face) – from the Archive

Once upon a time, during the reign of the Divine Tiberias, a.k.a the fifties, young boys got Summer jobs. Now I’m sure some kids still do; it’s just that the kids seem older now than they were then. And the kind of jobs available to kids is not nearly as broad. Indeed many no longer exist.

I got my first “job” when I was 13 years old on Zio Antonio’s fruit and vegetable truck. Zio, as he was affectionately known traveled a couple of routes through the Brooklyn neighborhoods bringing fresh fruits and veggies right to the front door of the ladies.

He would load up the truck at the markets early in the morning buying exactly what he knew he could sell that day. There was no place to store anything unsold; besides, fresh meant today’s fresh, not tomorrow’s, The truck was open in the rear with a canvas roof covering the produce, which was arranged on a slanted board so it was all plainly visible to the housewives standing along side.

He would come home from the markets, pick me up and out we would go.

The ladies would hear us coming through their open windows. Cowbells and vegetable truck lullabies.

“Escarole! Get your fresh ‘scarole!! Tomato! Jersey tomato fresh from the farms!!” Broccolli! Peaches!!  Zucchini!  We have fresh Zucchini!  Strawberries! Get ‘em while their fresh! Strawberries!!”

I got pretty good at the songs. Out would come the ladies and their daughters, home for the Summer from school.

“Hi Frankie boy! How are you today?” “I’m fine Mrs. M. What can I get you?” “Two pounds of peaches please Frankie”. I weighed. Zio took the money.

And then came thirteen year old love. She was the daughter of Mrs. M; her name was Gaetana, which is a tough one to translate. She too was 13. She had breasts. God did she have breasts.

She would whisper out of mom’s earshot; “Hi Frankie” “Hi Gay! How are you? “I’m fine. Are you going to the roller rink Saturday night?” “Oh yes Gay.”

Her mother would then spot her talking to the fruit truck boy and give her a little push toward the front door. Gay would look over her shoulder and on Saturday night during the “couples” skate I would roller skate with Gay in her little skating outfit at the rink and summer by the Ravenhall Pool with her in her bathing suit,  the envy of every boy who ever dreamed of breasts.

After the day was over, I would hose down and sweep the truck and get it ready for the next day. All for a couple of bucks and a free lunch. Hey, a couple of bucks got you into Ebbits Field in those days.   I would give half of my earnings to my mom.

Zio, bless his heart, would distribute anything he hadn’t sold to the neighborhood poor, including my mother. 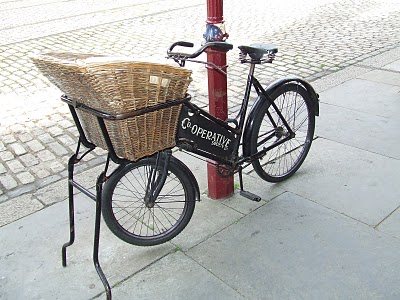 The following Summer I got a job at the grocery market. It was bigger than the local grocer but much smaller than the super-markets to come.

I bagged. I put stuff on shelves. I swept; but mainly I delivered groceries on a bicycle.

It was a Schwinn with balloon tires and a big basket in front. Housewives would shop and if they bought five or six bags of groceries, they had no way to get them home. Many women did not have access to cars or couldn’t drive. Usually a family only owned one car anyway and the husband would take it to work. That’s the way it was in my house.

So the grocer hired me to deliver the goods on a bike.

Now before I could start this job I had to get “working papers”. Anyone under 16 who had a real job had to get papers. It required a trip to the Department of Health and a physical exam.  I didn’t need them for Zio but I needed them for the grocer.

Thinking back, the place was a perv’s dream, filled with boys under 16 standing in their tightie whities waiting for an “exam”. “Drop your pants. Turn your head to the right. Cough. Turn you head to the left. Cough”. Looking for hernias.

Now there were lots of kids with head lice around but getting your young and growing junk checked out does seem a bit much. Life in the fifties.

After getting my papers I started delivering groceries – sometimes to bored housewives virtually locked up in dingy apartments.  I was someone to talk to – kind of like the pool boy of the ’50s.

And of course, the time came.  “Would you like to come in for a cold drink Frankie?”.

The Oriental – now a Dept. Store

In my fifteenth Summer I got the best job of my youth. I was a movie usher at the Loew’s Oriental on 86th street in Brooklyn.  You’ve seen 86th street if you’ve seen “Saturday Night Fever”.  It’s the street John Travolta is walking down during the opening credits.

The theater was a jewel of “oriental” decor with several thousand seats.

I got a maroon uniform and a flash-light. Since I was under 16 I was not allowed by law to work after 6 P.M. I was always on “days” and “weekends”.

The theater was mostly empty during the week-days; on Saturday the kid’s matinees jammed the place up. On hot days it would be more crowded. The theater was air-conditioned at a time when nobody had air conditioning at home.

And I got to see the movies for free, which was great except that you got to see them over and over – at least for a week anyway.

I first saw Marlene Dietrich in “Witness for the Prosecution” that Summer and “High School Confidential”, which was all about juvenile delinquents and “mary jane”. And HSC had rock and roll music!   Jerry Lee Lewis!   And Mamie Van Doren!! Geez.  Mamie Van Doren.  Shocking.

That Summer of innocence passed and soon, at 16, I graduated high school and took a job in the mail room of the First National City Bank of New York. I was white collar! Real life had begun.  My father began treating me like a man.

When the hot breezes of Summer blow I can still see the vegetable truck, Gaetana’s breasts, the cold drinks, Marlene Dietrich and Mamie V. D.  And I can still hear Jerry Lee Lewis sing.  I’m listening to him now.  He married his 13 year old cousin when he was 23.