Suicide of a Senator – From the Archives – October 2015

For those of you who think right wing politics has never been so dirty. 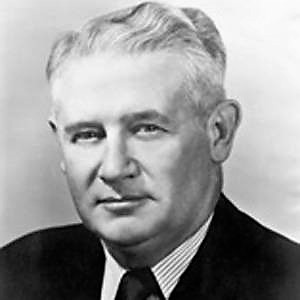 This morning while enjoying a second cup of coffee and the company of song birds out on the lanai in these early days of a Florida autumn I was thinking about dirty politics  and Joe McCarthy.

Senator Joe of the cold war era; he who believed there was a communist pinko librul behind every bush in Washington and at every other desk in the State Department.  He who was dedicated to rooting out these un-Americans.

Joe McCarthy would use every means at his command to win against the vast conspiracy of the “deep state” trying to take over America’; those at the time taking their orders directly from Joe Stalin.

I am casually paying attention to the chaos in the House with the Grand Old Party trying to pick a new Speaker.  (In 2015 the GOP controlled the House) Kevin McCarthy, who was the favorite abruptly withdrew his candidacy after being considered a shoo-in.  The Huffington Post reported that a very large conservative donor threatened to reveal that McCarthy had an affair with a female legislative colleague.

Her name was mentioned in the article.  Tsk tsk.  Of course McCarthy denied that this was the reason for his withdrawal.  He dropped out for the good of the party.  He did however drop out the very next day.

The Joe McCarthy days in the early Cold War affected everyone – even kids like me  I was an avid reader at the local library, where as a regular, the librarian would let me borrow books other than kid’s books.  I read about astronomy, Greek mythology, the Trojan War, the Roman Republic.  I also read about the second world war, Adolph Hitler, the Holocaust – and socialism (grandma was a red).

My father, seeing the books on socialism, warned me not to take those books to school nor to talk about them to anyone.  There were kids at school whose parents were strong supporters of McCarthy.  We got questions in “civics” class – should communists be allowed to run in our elections?

Then we took cover under our desks once a week to protect us from the possibility of atomic blast.  Right.

Now besides communists, fellow travelers and their ilk, Joe McCarthy looked for homosexuals, aided and abetted by J. Edgar Hoover.  Hoover as we now know had a long time partner, Clyde Tolson. who would inherit his estate, move into his house and accepted the American flag at his funeral.  Think about that for a moment.

Add to that thought the fact that Roy Cohn was one of McCarthy’s lawyers.  Al Pacino would play Cohn in Angels in America as Cohn was dying of AIDS.

While it may be funny now, it was not so funny then.

A young man was arrested in 1953 by the Washington D. C. police for making a homosexual advance in Lafayette Park, directly across the street from the White House.

The police investigated and decided not to press charges.  Should be the end of it right?  Wrong.

Two U.S. senators — Styles Bridges of New Hampshire and Herman Welker of Idaho, close allies of the anti-Communist demagogue Sen. McCarthy — intervened with Washington prosecutors and demanded that he be brought to trial on morals charges.   He was eventually convicted and fined $100.

Because the young man was the son of Senator Lester Hunt, a Democrat from Wyoming. 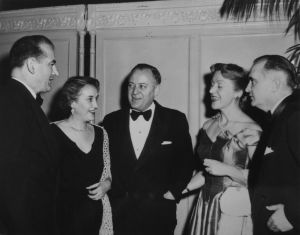 Senators Bridges and Welker then blackmailed his father, threatening to flood the state of Wyoming with 25,000 pamphlets about the arrest for soliciting gay sex if the senator didn’t give up his seat before the 1954 elections, when control of the Senate was at stake.

They were going to canvass every house  in every town and tell them that “a fag was lining in the Hunt family home.”

The pressure was so great that on June 19, 1954 Senator Lester Hunt went to his office in the Capitol and killed himself with a rifle.  Although the details were covered up for years, the event became the inspiration for the 1959 best selling novel “ Advise and Consent,” later a popular Hollywood movie that had a huge cultural impact due to its frank depiction of the ways in which homosexuality was used as a political weapon at the time.

Hunt was a Wyoming dentist, the first governor of the state to serve consecutive terms before he was overwhelming elected to the Senate.  It was a time when Wyoming elected Democrats.

“Hunt’s death came during a tumultuous period when the Senate was engulfed in the Army-McCarthy hearings, triggered by claims by the Wisconsin senator that Army generals were protecting Communists. (A major backdrop to the hearings was rumors about the sexual orientation of multiple players and widespread assumptions that gays were security risks who were every bit as dangerous as Communists because they might be susceptible to Soviet blackmail.)

The suicide of Hunt — an outspoken foe of McCarthy — shocked members on both sides of the aisle and may have helped turn the tide against McCarthy. “I can think of few events which cast a greater pall of gloom over the Senate,” then Senate Democratic leader Lyndon Johnson said at the time.”

The official explanation for the suicide was that Hunt was despairing over deteriorating health issues. But within days of the senator’s death, veteran Washington columnist Drew Pearson first linked the suicide to the blackmail plot by Bridges and Welker, calling it “one of the lowest types of political pressure this writer has seen in many years.”

The GOP senators adamantly denied Pearson’s allegations and mounted a campaign to discredit him, even threatening to sue newspapers that reprinted it. (One of Bridges’ main supporters in New Hampshire, William Loeb, the publisher of the staunchly conservative newspaper the Manchester Union Leader, blasted the Pearson column in an editorial under the headline, “Pro-Communist Attack on Bridges.”).

“But in recent years, Wyoming politician and historian Rodger McDaniel, author of the 2013 book, “ Dying for Joe McCarthy’s Sins: The Suicide of Wyoming Senator Lester Hunt,” uncovered new evidence that supports the original Pearson column. Digging through Bridges’ own Senate files in New Hampshire state archives, he found records showing that Bridges and Welker had directly intervened in Lester Hunt Jr.’s case, summoning the chief of the Washington, D.C., vice squad, detective Roy Blick, three times to Capitol Hill to answer questions about his handling of it, suggesting he had taken a bribe to let the senator’s son off and demanding to know why it had not been taken to prosecution.”

One key unanswered question is the role of McCarthy himself. McDaniel contends in his book that he was complicit, noting that on the day before Hunt took his life, the notorious Communist inquisitor had told the press that he planned to investigate an unnamed “fellow senator who had fixed a case.”   Unfortunately a large portion of McCarthy’s Senate files remain sealed at Marquette University, making it difficult to reach firm conclusions about the senator’s role.

One might reasonably ask why these files are stilled sealed.

Incredulously, no formal investigation was ever conducted by the Senate or the Justice Department.    The Justice Department is now facing new calls to investigate;
Wisconsin Sen. Tammy Baldwin — the first openly lesbian member of Congress — asked in a letter to “help shine a light on a dark chapter in the history of the Senate” by investigating the roles that three U.S. senators played in hounding Hunt to his death by exploiting his son’s arrest for soliciting gay sex.   The Hunt family is supporting the request as well.

Everyone except the young man arrested, now well into his 80s, is long dead.

P.S – We never heard a word about it.

There will not be any prosecutions – only enlightenment as to how the right wing works.  It is a lesson which Kevin McCarthy, given his recent withdrawal for Speaker, perhaps has now learned. 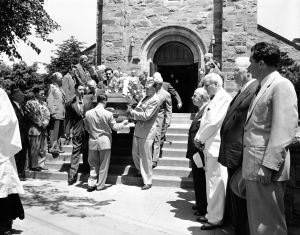 The funeral of Senator Lester Hunt

I was born during year four of the reign of Emperor Tiberius Claudius on the outskirts of the empire in Brooklyn. I married my high school sweetheart, the girl I took to the prom and we were together for forty years until her passing in 2004. We had four kids together and buried two together. I had a successful career in Corporate America (never got rich but made a living) and traveled the world. I am currently retired in the Tampa Bay metro area and live alone. One of my daughters is close by and one within a morning’s drive. They call their pops everyday. I try to write poetry (not very well), and about family. Occasionally I will try a historical piece relating to politics. :-)
View all posts by toritto →
This entry was posted in history and tagged Army McCarthy, blackmail, Cold War history, communists, homosexuality, investigation, Joe McCarthy, McCarthism, Senator Herman Welker, Senator Lester Hunt, Senator Styles Bridges, suicide. Bookmark the permalink.