Silent Heroes of the Past – The Spansh Flu 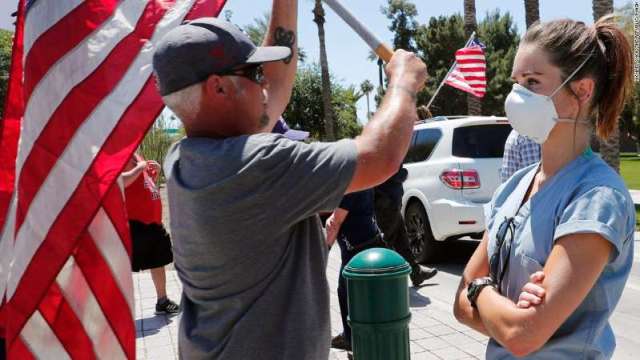 A nurse faces down “liberation” demonstrators in front of a hospital.   Of course the swamp fever right claimed she wasn’t really a nurse.  Just an actress.

In the fall of 1918 the Great War in Europe was winding down and peace was on the horizon. Deep within the trenches men lived through some of the most brutal conditions of life, which it seemed could not be any worse. Then, in pockets across the globe, something erupted that seemed as benign as the common cold. The influenza of that season, however, was far more than a cold. In the two years that this scourge ravaged the earth, a fifth of the world’s population was infected. The flu was most deadly for people ages 20 to 40. This pattern of deaths was unusual as influenza is usually a killer of the elderly and young children. It infected 28% of all Americans .

Of the U.S. soldiers who died in Europe, half of them fell to the influenza virus and not to the enemy . An estimated 43,000 servicemen mobilized for WWI died of influenza; 1918 would go down as an unforgettable year of suffering and death and yet of peace.  In all, some 575,000 Americans died.

The virus’ unique severity puzzled researchers for decades, and prompted several questions, such as “Why was the 1918 virus so deadly?” “ “Where did the virus originate from?”, and “What can the public health community learn from the 1918 virus to better prepare for and defend against future pandemics?” These questions drove an expert group of researchers and virus hunters to search for the lost 1918 virus, sequence its genome, recreate the virus in a highly safe and regulated laboratory setting at CDC, and ultimately study its secrets.

A small ocean-side village in Alaska called Brevig Mission would become both testament to this deadly legacy as well as crucial to the 1918 virus’ eventual discovery.

Today, fewer than 400 people live in Brevig Mission, but in the fall of 1918, around 80 adults lived there, mostly Inuit Natives. While different narratives exist as to how the 1918 virus came to reach the small village – whether by traders from a nearby city who traveled via dog-pulled sleds or even by a local mail delivery person – its impact on the village’s population is well documented. During the five-day period from November 15-20, 1918, the 1918 pandemic claimed the lives of 72 of the villages’ 80 adult inhabitants.

Later, at the order of the local government, a mass grave site marked only by small white crosses was created on a hill beside the village – a grim monument to a community all but erased from existence. The grave was frozen in permafrost and left untouched until 1951.

That year, Johan Hultin, a 25-year-old Swedish microbiologist and Ph.D. student at the University of Iowa, set out on an expedition to Brevig Mission in the hopes of finding the 1918 virus and in the process unearth new insights and answers. Hultin believed that within that preserved burial ground he might still find traces of the 1918 virus itself, frozen in time within the tissues of the villagers whose lives it had claimed.

In 1951, Hultin successfully obtained permission from the village elders to excavate the Brevig Mission burial site. With the help of several of his university colleagues, Hultin set up a dig site over the grave. The excavation took days, as Hultin had to create campfires to thaw the earth enough to allow for digging. Two days in, Hultin came across the body of a little girl — her body was still preserved wearing a blue dress, and her hair was adorned with red ribbons. Ultimately, Hultin successfully obtained lung tissue from four additional bodies buried at the site, but logistical and technological limitations of the time period would prove formidable.

. Once back in Iowa, Hultin attempted to inject the lung tissue into chicken eggs to get the virus to grow.5 It did not. In the end, perhaps unsurprisingly, Hultin was unable to retrieve the 1918 virus from this initial attempt. It wouldn’t be until 46 years later, in 1997, that Hultin would have another opportunity to pursue the 1918 virus.

That year, a Dr. Jeffrey Taubenberger, working for the Armed Forces Institute and his team described their initial work to sequence part of the genome of the 1918 virus.

Taubenberger’s team team successfully extracted partial DNA of the 1918 virus from lung tissue obtained from a 21-year-old male U.S. service member stationed in Fort Jackson, South Carolina. The serviceman had been admitted to the camp’s hospital on September 20, 1918, with a diagnosis of influenza infection and pneumonia. He died six days later on September 26, 1918, and a sample of his lung tissue was collected and preserved for later study.

This work did not represent a complete sequence of the entire 1918 virus’ genome, but it provided a clearer picture of the pandemic virus than ever before. Based on the 1918 virus’ sequence data Taubenberger assembled in 1997, he and his fellow researchers initially claimed that the 1918 virus was a novel influenza A (H1N1) virus that belonged to a subgroup of viruses that came from humans and pigs, as opposed to birds. However, there was still much to learn about the virus.  Ultimately the virus would reveal characteristics of avian and mammal origins.

Hultin once again became inspired to attempt to recover the 1918 virus.

Forty-six years had passed since Hultin’s first trip to the gravesite, and he was now 72 years old. He once again sought permission to excavate the gravesite from the village council — which he obtained — and he also hired locals to assist in the work. Hultin paid for the trip himself at a personal cost of about $3,200. The excavation took about five days, but this time Hultin made a remarkable find.

Buried and preserved by the permafrost about 7 feet deep was the body of an Inuit woman that Hultin named “Lucy.” Lucy, Hultin would learn, was an obese woman who likely died in her mid-20s due to complications from the 1918 virus. Her lungs were perfectly frozen and preserved in the Alaskan permafrost. Hultin removed them, placed them in preserving fluid, and later shipped them separately to Taubenberger and his fellow researchers, including Dr. Ann Reid, at the Armed Forces Institute of Pathology. Ten days later, Hultin received a call from the scientists to confirm — to perhaps everyone’s collective astonishment — that positive 1918 virus genetic material had indeed been obtained from Lucy’s lung tissue.

By 1999  the scientists had succeeded in sequencing the full length gene sequence of the 1918 virus. To accomplish this, the pathologists used fragments of the virus obtained from the bodies of the formerly described 21-year-old Fort Jackson service member, “Lucy” from Brevik Mission, and a third person, a 30-year-old male service member stationed at Camp Upton, New York. This man was admitted to the camp hospital with influenza on September 23, 1918, had a rapid clinical course of illness, and died from acute respiratory failure on September 26, 1918.

With the entire genome of the 1918 virus now sequenced, the necessary information was in place to reconstruct a live version of the 1918 virus. However, one more intermediate step was needed to start the reverse genetics process, which was to create plasmids for each of the 1918 virus’ eight gene segments.

This task was undertaken by renowned microbiologist, Dr. Peter Palese and Dr. Adolfo Garcia-Sastre at Mount Sinai School of Medicine in New York City. A plasmid is a small circular DNA strand that can be amplified (or replicated) in the laboratory. Years earlier, Dr. Palese helped pioneer the use of plasmids in reverse genetics to produce viable influenza viruses. The techniques he developed allowed the relationships between the structure and function of viral genes to be studied, and these efforts paved the way for the techniques used to reconstruct the 1918 virus. Once Dr. Palese and his colleagues at Mount Sinai completed creation of the plasmids, they were shipped to CDC so the official process of reconstruction could begin.

The tremendous responsibility in leading the project to re-create the 1918 virus in the lab fell toDr. Terence Tumpey,who began his work in 2005 at the CDC lab under the highest level of security.

On the day the 1918 virus appeared in his cell-culture, Dr. Tumpey knew history had been made, and in fact, a historic virus had been brought back from extinction. He sent a playful, Neil Armstrong-inspired email later that day to colleagues and collaborators, which simply said “That’s one small step for man, one giant leap for mankind.” Everyone then knew what had been accomplished. Dr. Tumpey had become the first man to reconstruct the complete 1918 virus.

The virus was extensively studied.  Tumpey and colleagues wrote “the constellation of all eight genes together make an exceptionally virulent virus.  ”No other human influenza viruses tested were as exceptionally virulent. In that way, the 1918 virus was special – a uniquely deadly product of nature, evolution and the intermingling of people and animals. It would serve as a portent of nature’s ability to produce future pandemics of varying public health concern and origin.”

These are the men and women working in silence, with expertise so many of us poo-poo today.  Because of their work we can study CORVD-19 in the lab and (a) search for a vaccine and (b) seek effective treatment for those who have been stricken with the virus.

This 2020 plague will be with us for awhile. Get used to it.  Either current science will find the way to immunity or cure or we will have to wait until 60% or so of the world population is infected for herd immunity.  Many of the fit and young will get it and not even know it.  For us old or sick, the survival rate is not favorable.  It will be up to us take care of ourselves as best we can.

Or you can always just inject bleach.

12 Responses to Silent Heroes of the Past – The Spansh Flu