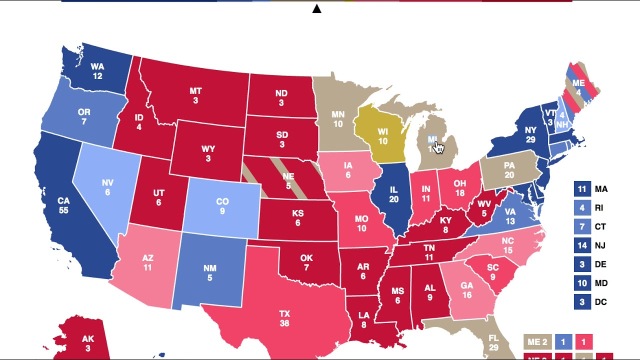 Well my Florida Democratic Primary  Election ballot is still laying on my kitchen counter unfilled out with my choice for who among our candidates should be the party’s nominee.  Tonight is the South Carolina debate followed by the S.C. primary election on Saturday, followed by Super Tuesday on March 3 and the Florida primary on March 17.

Decisions. Decisions.  Who among this lot can beat the dyed blond Don.

We need to win the majority of the battleground states in order to win.  Red states like Utah, Kansas and South Carolina will vote Trump no matter who we nominate.  So in the end, what does the South Carolina primary really matter?  Dems in Charleston picking a candidate this weekend are picking the loser of their state.  They cannot deliver victory nor South Carolina’s electoral college votes.

New York and California  will vote Blue no matter who we nominate.  We can poll 5 million more votes than Trump in the great blue states and still lose the Presidency and perhaps our democracy.  Remember Hillary’s popular vote victory.

The Presidential election will be decided, win or lose, in nine states – Michigan, Wisconsin, Minnesota, Pennsylvania, North Carolina, Florida, Nevada, Maine and Arizona.  These are states won by Trump or Hillary Clinton by margins of less than 2%.  They will be in play again this year.  They represent the deciding votes in the electoral college and like it or not whomever wins the majority of these votes will be our next President.

Poll after poll indicates that any number of the current crop of Democratic candidates can win the popular vote head to head against our Great Leader.  Unfortunately winning the popular vote by five million in New York, California and Massachusetts while losing the nine battleground states by one vote each will win Donald Trump a second term.

The electoral college is not a bastion of democracy.  Twice in the last 20 years the winner of the national popular vote has lost the election.   So much for one man one vote.

Think of it this way – if the Presidential election were held in only these nine states, who would be the strongest candidate to face Trump?  Who would have the best chance of beating him by winning a majority in five or six  of these nine states?

Bernie and his bros think he can do it.  Michael Bloomberg thinks he can’t.  So does Joe Biden.  Pete, Elizabeth, Amy and even Tom Steyer think they can.  And no one shows any signs of dropping out – yet.  Each has a big stake in the debate tonight.

Biden needs a strong showing in his “firewall” of South Carolina.  Bloomberg needs a strong showing as well after his lackluster performance first time around in Nevada where he wasn’t even on the ballot.  Pete, Elizabeth and Amy need to shore up support among black voters and show that they can go toe to toe with the Trumper.   Steyer,  another billionaire whom no one outside of Wall Street had ever heard of before he decided he wanted to run for President, will continue his ego trip.  His support in South Carolina is based on his position on reparations for slavery.  His support has never risen above single digits anywhere else.

The Bloomberg campaign has been pointing out that (a) Warren has been  holding on to progressive votes that would most likely go to Bernie if she dropped out.  She has fallen precipitously in the last three months and her road to the nomination is a long and winding one, likely leading nowhere.  Secondly, the moderate candidate vote is split among Bloomberg, Joe Biden, Pete and Amy, the  point being if no one drops out allowing moderates to unify behind one candidate, Bernie may have a virtual lock on the nomination after Super Tuesday when fully one third of the delegates for nomination are chosen.

“I think voters should understand that there is really only a two-candidate race at the top of the Democratic field, and stacking up votes for folks that do not really have viability, either in Florida or in California or other Super Tuesday states, you’re likely to perpetrate a Bernie nomination.”  So says the Bloomberg campaign.

Other members of Bloomberg’s staff have been less subtle in their lack of confidence that Sanders, who has scored delegates in the early contests, could decisively beat Trump in a general election.

On the Yahoo News podcast “Skullduggery,” Bloomberg campaign manager Kevin Sheekey claimed that Sanders stood no chance next to Trump in the election, and would be particularly clobbered in six critical swing states: Wisconsin, Michigan, Pennsylvania, North Carolina, Florida and Arizona.

I can vouch for the fact that IMHO Bernie cannot carry Florida against Trump though he could win the Democratic primary here. Yesterday he enraged Miami’s Cuban community by asserting that not everything Fidel Castro did was all bad.  He pointed to a literacy program started by Fidel while decrying the authoritarian rule of regime.  He is literally right of course; not everything was or could be all bad; but that is not the way to court votes in Florida.  Nobody wants to be arguing about Fidel Bernie!

Talk about Scandinavia.  Don’t talk about Cuba.  On the other hand, most of the Cuban population here are Republican anyway and will vote that way again.  They have been here now for three generations and no one is going back.  Comes”freedom” for Cuba and the grandchildren of the “refugees” will buy condos in Havana and live in Miami.

Bloomberg will attack Bernie tonight with the idea that this is a two person race between he and a socialist.  He has been off the campaign trail this week practicing his debating and public speaking skills getting ready for attacks which may come his way.  Most of the fire from other candidates will also be aimed at Bernie, who is now clearly the front runner.

Bernie trails Joe Biden in South Carolina (like I said, what does it matter?) by several percentage points.  If Bernie wins S.C. he is clearly on his way to the nomination.  The question then becomes can he amass enough delegates to ensure a first ballot nomination at the convention if no one else drops out?

The 2020 Democratic presidential nominee will be selected by delegates to the Democratic National Convention, which will be held July 13-16, 2020, in Milwaukee, Wisconsin. The delegates are individuals chosen to represent their state, territory, or Democrats Abroad at the convention.

In 2020, there will be 4,750 delegates: 3,979 pledged delegates (pledged to vote for a specific candidate on the first ballot as determined by their state’s primary election) and 771 automatic delegates—more commonly known as “super delegates.”

To win the Democratic nomination, a presidential candidate must receive support from a majority of the pledged delegates on the first ballot: 1,991 pledged delegates.   If  no one wins the required majority on the first ballot and it goes to a second ballot or more, automatic super delegates delegates will be able to vote and a candidate must receive majority support from all delegates—2,375.5 votes.  Roughly two-thirds of the delegates will have been allocated by the end of March 2020.

So it is quite within the realm of possibility that if none of the major candidates drops out and Bloomberg does well on Super Tuesday and beyond, none of the current top candidates will have a majority on the first ballot.

Which throws the nomination into the hands of the party establishment.  Will they vote for whomever is leading at the time?  That’s what Bernie wants them to do.  Not so the moderates.

What happens if Bernie is leading at that point but someone else in nominated?  Will Bernie voters stay home?  Will some vote for Trump as they did in the last election?

Without a united party behind whomever is nominated we are looking at four more years of Trump and god only knows who or what comes after him.