Any one remember Jimmie Stewart?

You old guys and gals do; the star of  “Mr.  Smith Goes to Washington.”  Back in the day, Jimmie Stewart, a real live war hero was the combination of Tom Hanks and John McCain.  He would have been the perfect Democratic candidate back in 1984.  Unfortunately, he wasn’t available.  His good friend, Ronald Reagan was running for his second term and was, well, unbeatable.

Establishment Democrats back then were still trying to put together the old Roosevelt coalition; unfortunately this approach necessitated winning a number of southern states on the electoral map.  The strategy succeeded when Jimmie Carter won the White House.

And then, as Carter ran for a second term, Ronald Reagan asked the question during the national Presidential debates – “Are you better off today than you were four years ago.? – and it was all but over.

It wasn’t all Carter’s fault.  The gas crisis caused by OPEC and the Iranian hostages doomed his Presidency.  It didn’t help when he appeared on national television in a sweater in the White House advising the nation to get along with less and turn down the heat in their homes.

Running against Reagan the second time around the Dems could have used a Mr. Smith.  Millions of Americans felt they were being ignored by the reigning two parties.  Rather than offering candidates who inspired voters, they were offered aspirants who passed the establishment litmus tests.  The voters wanted candidates oriented toward the future.  Someone unafraid of bold solutions.Someone always putting the  country ahead of party.

The inspiration was John F. Kennedy. 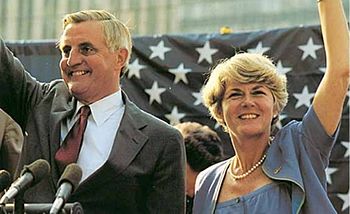 Walter Mondale, a leader of the establishment back then, was the Joe Biden of 1984.

Back then there was a stark disconnect between Democratic voters and the bosses of the party.  There was a rising star among the Democratic base and his name was Gary Hart, the Senator from Colorado.

Hart, more cerebral than consumed with fiery passion nevertheless excited younger voters.  He almost wrested the nomination from Mondale.  When the party bosses chose Mondale instead, Ronald Reagan buried him.

Establishment defenders argued that no Democrat could have won that year.   Reagan was unbeatable.  They were probably right but critics and pundits began to see Presidential elections in generational terms rather than geographic.

Gary Hart and his mistress Donna Rice in Miami.  Hart was married at the time.

Had Hart been nominated over Mondale, his advisors planned to run a credible campaign against Reagan – expecting to lose – and then successfully campaign in the next election after Reagan left office.  Of course there never was a second campaign due to Hart’s personal failings though his behavior certainly seems mild today after the sins of Bill Clinton and Donald Trump.

Today the alienation and split of Democratic base voters from the party has never seemed greater, the situation worse than it was 35 years ago.  Voters have a jaundiced view not only of  politics but of their fellow Americans who do not share their political affiliation,  Three fourths of Americans rank ethics and corruption in politics as an important issue, right up there with the cost of health insurance, prescription drugs, school shootings and national security.

Back in Mondale’s day, when the party faithful were looking at fresh young faces who might take on Reagan, one of the young guns under consideration was the 41 year old Senator from Delaware, Joseph Biden.  Biden opted out at the time, wanting no part of Reagan and didn’t want to sacrifice his Senate seat as he was up for re-election that year.

And so here we are, the elderly Joe Biden running for the Presidency as the establishment candidate trailing the socialist Bernie Sanders in Iowa and New Hampshire, the first two states which will caucus and cast votes.  Both candidates are older than dirt; that is to say older than me.  So much for generational politics.

Bernie, an independent, is the longest serving independent in Congressional history.  He has been joined by another independent, Michael Bloomberg, self-made billionaire center/left candidate, running as a Democrat,  who has publicly stated that, in his opinion, Joe Biden can’t beat Donald Trump.  Bloomberg, who funds his own campaign and is thus barred from the debate stage, is concentrating his efforts on “Super Tuesday” – and has already moved from nowhere to some 5% of the vote.

Four years ago another non-ideological New York billionaire made a similar calculation and ran as a Republican.  He is now in the White House

Elizabeth Warren is fading though The Nation magazine is advocating a Sanders/Warren ticket.  Kamala Harris and Corey Booker have already dropped out.

Is the establishment backing another loser? Where is Jimmie Stewart’s Jefferson Smith when you need him?

Trump will soon be “acquitted” by his Republican water carriers and will begin campaigning across the country proclaiming his greatness in the face of the Democrat “hoax” with epitaphs of “Crooked Joe, Crazy Bernie, Pocahontas and Sleaze bag Schiff.”

Trump can’t call Bloomberg anything.  And Mike is pretty good at name calling himself.

“I’m a New Yorker and I know a con when I see one!”  He warned us about Trump before the last election.  He runs on center-left positions.

Don’t be surprised if Michael Bloomberg makes a real go of it.

6 Responses to Looking For Jmmie Stewart