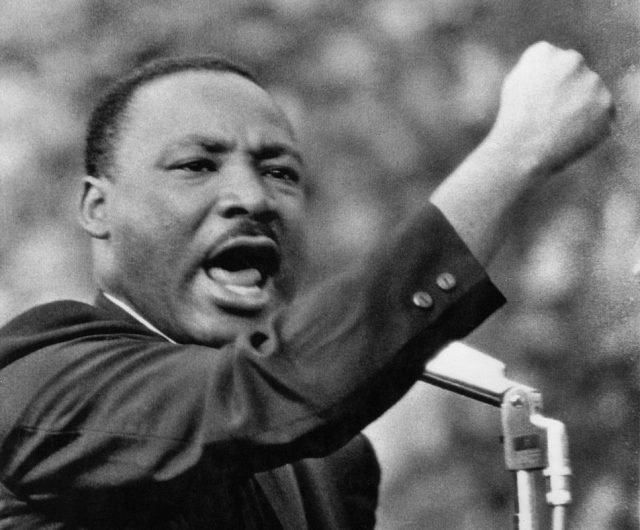 “This morning I was riding to the airport in Washington, D.C., and on the way to the airport the limousine passed by the Jefferson monument, and Reverend Andrew Young, my executive assistant, said to me, “It’s quite coincidental that we would be passing by the Jefferson Monument on Independence Day.” You can get so busy in life that you forget holidays and other days, and it had slipped my mind altogether that today was the Fourth of July. And I said to him, “It is coincidental and quite significant, and I think when I get to Atlanta and go to my pulpit, I will try to preach a sermon in the spirit of the founding fathers of our nation and in the spirit of the Declaration of Independence.” And so this morning I would like to use as a subject from which to preach: “The American Dream.”

“It wouldn’t take us long to discover the substance of that dream. It is found in those majestic words of the Declaration of Independence, words lifted to cosmic proportions: “We hold these truths to be self-evident, that all men are created equal, that they are endowed by God, Creator, with certain inalienable Rights, that among these are Life, Liberty, and the pursuit of Happiness.” This is a dream. It’s a great dream.”

“Then that dream goes on to say another thing that ultimately distinguishes our nation and our form of government from any totalitarian system in the world. It says that each of us has certain basic rights that are neither derived from or conferred by the state. In order to discover where they came from, it is necessary to move back behind the dim mist of eternity. They are God-given, gifts from His hands. Never before in the history of the world has a sociopolitical document expressed in such profound, eloquent, and unequivocal language the dignity and the worth of human personality. The American dream reminds us, and we should think about it anew on this Independence Day, that every man is an heir of the legacy of dignity and worth.”

“Now ever since the founding fathers of our nation dreamed this dream in all of its magnificence—to use a big word that the psychiatrists use—America has been something of a schizophrenic personality, tragically divided against herself. On the one hand we have proudly professed the great principles of democracy, but on the other hand we have sadly practiced the very opposite of those principles.”

“But now more than ever before, America is challenged to realize its dream, for the shape of the world today does not permit our nation the luxury of an anemic democracy. And the price that America must pay for the continued oppression of the Negro and other minority groups is the price of its own destruction.   For the hour is late. And the clock of destiny is ticking out. We must act now before it is too late.”

“And so it is marvelous and great that we do have a dream, that we have a nation with a dream; and to forever challenge us; to forever give us a sense of urgency; to forever stand in the midst of the “isness” of our terrible injustices; to remind us of the “oughtness” of our noble capacity for justice and love and brotherhood.”