Photo post-card of the Chief Eunuch of the Ottoman Sultan Abdul Hamid II, photographed at the Imperial Palace. The Qizlar Agha, (the Keeper of the Firls) was one of the most powerful and sometimes the richest men in the Ottoman Empire until 1908. He supervised the Harem of the Sultan, and the princes, the financial affairs of the palace, the mosques of the capital and the mosques of the holy cities of Mecca and Medina. He served as the Chamberlain to the Sultan thus controlling access to him

Eh, but not so fast.  There was more to this harem stuff than meets the eye.  Many historians attribute in no small part the politics, and vicious rivalries of the harem to the long term decline of the Ottomans. 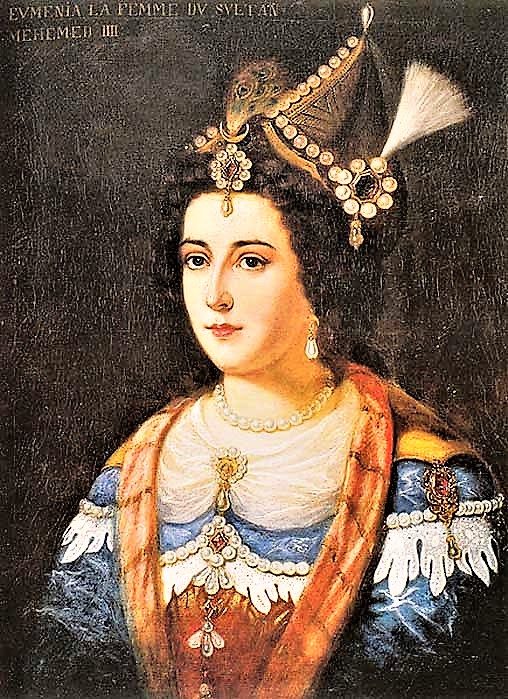 Portrait of Emetullah Rabia Gülnuş Sultan, Valide Sultan of the Ottoman Empire, 1695-1715. She was the last imperial concubine to be legally married to an Ottoman Sultan.  She was an ethnic Greek, born in Crete and daughter of an Orthodox priest. When the Venetians were driven from Crete by the Ottomans she was taken into slavery as a young girl.  She became the Sultan’s favorite and bore him two sons, both of whom became Sultan.

From about the 14th century onward the Ottomans no longer married their Queens – who thus ceased to be Queens – and depended for their posterity and pleasure alike upon their slaves.   Only Sulieman married one of his slaves, the Christian known as Roxellana and was completely dominated by her.  In the institutional sense, the Harem continued to rule the Empire.

For the Sultans, the Harem became the main setting of their lives.  Born in the harem of a slave it forged a chain around him in infancy which most of them were never able to break. The role of fighting had been turned over to mercenaries, the job of thinking and governing to foreign-born vizier-slaves while spoiled and frightened Sultans took refuge from all their problems among the women whose constant self interested adulation prevented them from developing the will, decisiveness or firmness which are necessarily stifled in an atmosphere of chronic indulgence.

The master’s virile lusts did not dominate the harem; it was the women’s ambitions which dominated.  The fact that the harem was a whole slave society led to disastrous results.   Its considerable population, reaching some 900 women at the end of the 19th century was served by innumerable domestics (300 cooks alone), black and white eunuchs, mutes, guards, pages, etc., all being utterly dependent upon the favor of the despot.

They waged continual war on one another for first place in his favor using the arts flattery, bribery, denunciation, wheedling and pandering to all of the Sultan’s vices and weaknesses.

One of the 400 plus rooms in the harem quarter of the Topkapi Palace – this one used when the Sultan visited his slaves.

In the harem was where future Sultan’s spent their formative years.  The women, though slaves, used their charms to attain influence; their custodians, the eunuchs, used them as influence to sway the ruler.  The chief eunuch could, after all, apply the whip to their carefully tended bodies.  The chief black eunuch, the Kislar Agha, “Keeper of the Girls” and “Guardian of the Gates of Felicity” was one of the most important men in the kingdom, though he was a slave.

It was the eunuchs who were entrusted with the education of the royal princes – with such education as they were permitted to have.  There was no era when princes received and genuine schooling and the eunuchs, who taught the princes up to age 11 had every incentive to maintain their royal charges in an ignorance even more dense than their own.

By the time of the last Sultan Hamid, the princes were taught romanticized, inaccurate stories of their ancestors, a smattering of French and music appreciation. The rest of the time they read the Koran.  History and politics were definitely forbidden.

There was a good school at the palace but it was for royal pages who would be taking up administrative positions in the government.  They were ALL foreign slaves -never Turks.

The harem not only failed to produce rulers of quality; it was barely able to produce a sufficient quantity of heirs to maintain the succession.  One would think that a ruler who owned hundreds of women would have no problems with the number of children – a plague for many western sovereigns – but excessive sexual indulgence made many Sultans sterile or impotent which made the number of children produced in the harem much less than one might have thought.

And once a son was born into the  slave world of the harem, he had a very good chance of being quickly ushered out.  For in the intense rivalry among the women of the harem there were two chief objectives.

While the Sultan did not marry, he usually named 4 “favorites” – Kadins or concubines.  While the first Kadin usually became a power in her own right, they were still slaves.  They could be “unfavorited” – or thrown into the Bosporus if the Sultan so desired.  The real prize was to  become the mother of the next Sultan – The Sultana Valide.  She became the head of the harem and had a position of power for life.

While it was the ambition of every woman in the harem to bear the Sultan a son and bring him to the throne, so it was the object of every other woman to prevent the birth or succession of any son but her own.  The perils of a potential Sultan thus began before birth.

The first object of an expectant mother was to keep her pregnancy secret for as long as possible; no easy task in the life of the harem shared with several hundred jealous women.

After the birth, the next problem was to preserve it from “accidents” – also no easy task.  Of the 30 or so children sired by Abdul Majid, some half died in infancy in the harem.

The Princes not only had to escape the jealousy of the women of the harem, but also of their half-brother fellow Princes for the throne did not go from father to son, but from brother to brother in order of birth.  Every Prince had to beware of the intentions of his half-brothers ready to step into his shoes – or  empty  them.

Bayazid, who took the throne in 1389 neatly solved the problem -he put all of his younger half-brothers to death.  The simple logic of this solution was followed by his successors for centuries.

Those who survived and took the throne had been prisoners in the harem in their youth, completely cut off from the outside world and denied even a rudimentary education.  For centuries those who became Sultan were ignorant old  men worn out by sexual excess and accustomed only to the society of slaves and eunuchs, imbued by the latter with the fear, hatred and suspicion of the world  which their own fate had developed in them.  The harem revealed itself as an almost infallible hatchery of misrule.

Former members of the Ottoman harem and eunuchs – 1909

So when you day dream about owning a collection of locked up hot girls of your very own, all I can say is “Be careful what you wish for!”