You know Palm Beach county; its where Trump’s Mar-a-Lago is located and where he spends his spare time.  There was a party there just this passed weekend for his supporters.  A table in a prime location cost twenty grand and the President wasn’t even there – he sent a video greeting his guests and explaining he was on his way to Hanoi to ensure his friend Kim was dismantling those nuclear weapons.

“The Trumpettes” at the country style soiree at Mar-a-Lago this passed weekend.

First time the President has ever been to Vietnam, let alone Hanoi.  He passed up his chance last time around due to his “bone spur.”

Also located in Palm Beach county is Jupiter, home to the wealthy and fabulously wealthy and one of the most exclusive barrier islands on the east coast.    Burt Reynolds lived in Jupiter until his passing.  Tiger Woods,  Michael Jordan.  Numerous professional golfers, baseball and football players.  Others of the 1% have a “place” there while officially residing elsewhere.

But not all of Jupiter is fabulously wealthy.

Near one of the most exclusive barrier islands in America was a massage parlor –  “Orchids of Asia” – a storefront located in a mundane strip mall (pardon the pun) on the cheating side of town, away from the high end boutiques and four star restaurants frequented by the mega-rich.

Something was amiss at the massage parlor.  First a health inspector noticed several suitcases. Then she noticed an unusual stash of clothing, food and bedding. A young woman who was supposed to be a massage therapist spoke Mandarin, little English and seemed unusually nervous.

The Inspector reported her findings to police.  She was right to be suspicious.  The women were not just employees; they were living at the day spa, sleeping on massage tables and cooking in the back room on hot plates.  They were Chinese and their passports had been confiscated by the woman in charge.  They were forbidden to leave the premises without an escort.

The Inspector’s suspicions prompted a sprawling investigation across four Florida counties and two states – Florida and New York – over nearly eight months, resulting in the disruption of what authorities say was a multi-million dollars human trafficking and prostitution operation.

Now none of this is anything new.  Florida has more massage parlors, strip joints and general sleaze than just about anywhere in the country.  Tampa, near where I live once held the record for highest number of strip joints per capita in the nation; for all I know it still does. We are also big on opioid pushing strip mall pill mills, filling prescriptions from “pain management” doctors who have found an easy way to make a living.

So the “massage” joint masquerading as a cover for sex work is nothing new here. During the eight month long investigation, police received approval to install cameras inside the Orchids of Asia, videotaping men coming and going at a rate of $49 for 30 minutes and $69 for an hour.  Plus presumably tips for good service.

Last week a major sweep of customers ranging from men in their 30s to at least one in his 80s also netted a number of the Palm Beach 1%.

John Havens, former President and Chief Operating Officer of Citigroup was caught on camera as well as John Childs, founder and CEO of the private equity firm  J. W. Childs and Associates.  These two should be happy; they weren’t prominently mentioned in the local press because a name much better known also made two videos – Robert Kraft, owner of the Super Bowl champion New England Patriots. 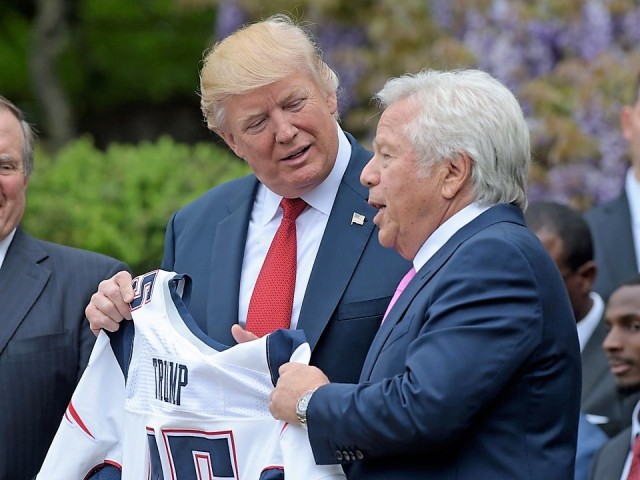 Seems Mr. Kraft made a couple of visits to the Orchids of Asia “spa,” the last on the morning of the AFC Championship game in Kansas City. Seems he stopped off at Orchids for a quickie BJ (apparently on film) prior to flying off to the game in his private jet.  He must have liked the service; he had been there just the day before.

No one is suggesting that Mr. Kraft had any knowledge that the female staff at the spa were being held there against their will.  At least not yet.  He was charged with a first degree misdeameanor – soliciting prostitution – which carries a maximum $5,000 fine and a year in prision.  First offenders never see the inside of a cell.

Being involved in any way with trafficking is, of course  a felony with much stiffer penalties.  It is also much more difficult a case to make as many of the women involved will not testify for rear of retribution by criminal gangs against themselves or their families back home.  If these women essentially say “I’m fine!” it is a high bar to make a trafficking case.

Many are skeptical that authorities actually care about human trafficking victims. Some believe that politicians are merely “virtue signaling” when they criticize trafficking, and that police want to turn the “national mood” against massage parlors.

“You are giving [law enforcement] and politicians too much credit,” one user wrote. “They know they are spewing lies about ‘human trafficking at [Asian massage parlors]. Their purpose is to get reelected and so they virtue signal to the public with their crusade to rescue the mythical enslaved [Asian massage parlor] minority women from their cruel masters.”

So now here you are, a high profile 77 year old multi-billionaire widower with a face well known to tens of millions of football fans.  You, perhaps Jerry Jones of Dallas and NFL  Commissioner Roger Goodell are the face of the NFL.

You, a mega-rich guy  can buy just about anything you want.  You have a model girl friend half your age.  You still have a need to be with other woman.

You can probably have just about any available woman you set you eyes on. But with lots of money and a high profile, you have to be careful.  This is the era of #metoo.

Besides, maybe you don’t want the entanglements of another long term relationship.  You can buy whatever you want when you want it.  Don’t want her coming to your home?   You can afford a quiet little out of the way place to meet for your trysts.  Want to stay anonymous?  Stay anonymous.  Money can buy anything

Buy exactly what you want.  Have her come to you.  Stay anonymous.  Its how you have to live when you’re a rich and famous sleaze.

You have your driver take you to Orchids of Asia “day spa” in the Publix grocery shopping mall on Route 1 to get a blow job – twice in two days – before catching your private jet to Kansas City for a big game.

How fukkin stupid can you be?  Or how arrogant?