Sex, Celibacy and the Catholic Church 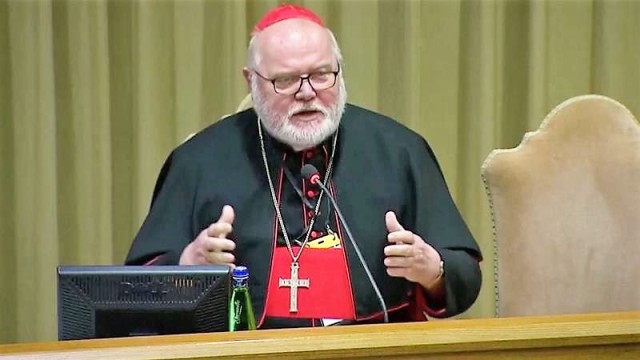 Germany’s top cardinal, Reinhard Marx, slammed the Catholic Church officials for  “trampling on the rights of victims” by deliberately canceling or overriding procedures for investigating child abuse.   “It was not the perpetrators, but the victims who were regulated and pushed into silence,” said Cardinal Marx.

When I was in my mid teens back in the ’50s I had a couple of good friends who had decided they wanted to become priests.  It wasn’t all that unusual in my Italian neighborhood for someone in a family to be priest.

My family however were not church goers.  My mom had spent years in a Catholic orphanage run by Benedictine nuns in upper Manhattan after her mom died.  In 1940 the census listed her as a “Ward of the State.”  After turning 18 she left the orphanage and married my dad some 18 months later.

She never went to church again.  Neither did my father.  They entered a church only for someone elses wedding or funeral.

My mom never told me why but she insisted that her three sons attend public schools.  Each Wednesday afternoon in elementary school we were released at 2 P.M.to attend “Religious Instruction” at the Catholic school across the street.  I made Communion and Confirmation but probably only because my grandparents were still alive and expected it.

I suspect my mom had a tough time at the orphanage but whatever happened to her there she took to her grave.  I got to know some nuns in my religious instruction classes over the years.  Some were nice to a kid like me; others however were what I can only describe as cruel, twisted crones.

Back to my teen years.

Eddie decided he was going to go seminary.  He had a big going away party given by his proud family.  Two years later he was back home and in high school.

He never said why.  We all assumed he no longer “heard the call” of priesthood and had discovered girls.

Alfred, several years older than Eddie and a legal adult also decided to go to seminary.  He was devout and I always thought the priesthood fit him.  If anyone would make a fine priest it would be Alfred.

He too came home – disillusioned.  He too never said why he left.

Looking back on comments from each over the next several years, when they would talk about their experience at all seemed to indicate a rampant and pervasive homosexuality in the seminaries they attended.  Did they come right out and say it?  No; they did not.  We were young, raised in the ’50s and were unable to decipher the clues at the time  – which seem obvious to me today.

Now homosexuality between consenting adults is not a crime; but it the eyes of the Church it is a sin and a violation of the vow of celibacy.  It is a crime if one of the participants is below the age of consent – which was probably 16 in the 1950s in most states while even younger in others.

Did my friends witness, know of or experience sexual abuse in the seminaries?  Probably.

Move on to my working life.  It is the early ’80s in Baltimore; a time when I could still smoke a cigar in my office and we had secretaries and administrative assistants.  In a casual conversation with one of the secretaries I discovers she was married.

Nothing unusual – until she told me she had married a Catholic priest.

They fell in love and he simply left his ministry and married her in a civil ceremony.

So much for celibacy.

This week Pope Francis has gathered a couple of hundred bishops at the Vatican to discuss the Church’s pedophilia problem.  Last week a Cardinal lost his red hat and was defrocked over sexual abuse issues.  The bishops listened sympathetically to victims yesterday, thoughts and prayers, reflection etc. etc.

Just today, a Colombian cardinal has warned fellow Roman Catholic bishops at a Vatican summit they could be imprisoned for covering up crimes if they don’t properly deal with clergy sex abuse cases.

Salazar, the archbishop of Bogota, also blasted the confidentiality agreements often attached to Catholic Church financial settlements with victims as an attempt to “buy their silence.”

Salazar proposed an obligatory code of conduct that outlines clear norms and penalties when bishops fall short in their handling of sexual abuse, an astonishing proposal from a cardinal of a country where the scandal hasn’t erupted in full.

We shall see where all of this goes.

In addition to pedophile priests, there have been accusations of abuse of nuns by priests, abuse of young girls by nuns and a New York Times report on children fathered by priests; all of these groups have descended on Rome this week to meet with prelates.

“Vincent Doyle, a psychotherapist in Ireland, was 28 when he learned from his mother that the Roman Catholic priest he had always known as his godfather was in truth his biological father.

The discovery led him to create a global support group to help other children of priests, like him, suffering from the internalized shame that comes with being born from church scandal. When he pressed bishops to acknowledge these children, some church leaders told him that he was the product of the rarest of transgressions.

But one archbishop finally showed him what he was looking for: a document of Vatican guidelines for how to deal with priests who father children, proof that he was hardly alone.”

,The Vatican has confirmed, apparently for the first time, that its department overseeing the world’s priests has general guidelines for what to do when clerics break celibacy vows and father children.

“I can confirm that these guidelines exist,” the Vatican spokesman Alessandro Gisotti wrote in response to a query from The New York Times. “It is an internal document.”

For the church, stories like Mr. Doyle’s draw uncomfortable attention to the violation of celibacy by priests and some liberals within the church have raised the issue as to whether it is time to make celibacy optional, as it is in other Christian churches.

The children are sometimes the result of affairs involving priests and laywomen or nuns — others of abuse or rape; the overwhelming majority remain out of the public eye.  There is apparently nothing in Canon Law which would require a priest who fathered a child to leave the church.  He is “encouraged to offer support” – whatever that means.  If it is not in Canon Law it is not a crime-it is a sin – which of course can be forgiven.

The tradition of celibacy among Roman Catholic clergy was broadly codified in the 12th century, but not necessarily adhered to, even in the highest places. Rodrigo Borgia, while a priest, had four children with his mistress before he became Pope Alexander VI, an excess that helped spur Martin Luther’s Protestant Reformation. Luther wrote mockingly that the pope had as much command over celibacy as “the natural movement of the bowels.”

There are no estimates of how many such children exist, but Mr. Doyle said that the website for his support group has 50,000 users in 175 countries.

Meanwhile the church is still grappling with the issue of how to respond to criminal behavior.  How long it will take to get to moral behavior is yet to be seen.

Consensual sex between consenting adult is not a crime – but it is considered a sin outside of marriage and a violation of priestly vows of celibacy in a church that has been anti-sexual for centuries.

The church cannot tolerate consensual sex, i.e. -priests that father children – with out being guilty of the great sin of hypocrisy.  Besides, experts say as many as 120 Catholic priests in the U.S. are married.  That’s largely because of a policy change made by Pope John Paul II in 1980, which offered a path for married Episcopal priests to continue their ministry after converting to Catholicism.

I grew up with the church’s rules: no sex before marriage. Especially us Catholics.

No sex with your girlfriend. Certainly no sex with another boy. And no sex alone. No “spilling the seed”. In Catechism class all us boys learned about Onan. Besides, it could make you go blind. I wore glasses from when I was six. Girls didn’t have to learn about Onan.  They had other sins to worry about.

And so even if the church solves its problems of pedophile priests it will still face the problem of what to do about consensual sex between consenting adults outside of marriage and the celibacy rule.

Its got a long, long way to go.

5 Responses to Sex, Celibacy and the Catholic Church