Well Christmas will be upon us next week and most of us will participate in all of those Christmas “traditions” handed down to us by our parents as cultural imperatives.  Even if you don’t participate you know what they are.

Ever wonder where some of these came from?

A lot of theories came up why Christmas is being celebrated on December 25.  One theory is based on the Christian tradition of The Annunciation; the day Mary was given the message that she will conceive a very special baby that is Jesus. This took place on March 25, so, counting nine months from this date, it was assumed that Jesus was born on December 25.

Hanukkah, the eight day Jewish festival of Lights is celebrated on the 25th of Kislev corresponding to late November to late December in the Gregorian calendar. A prophecy in the bible cited that a Jewish savior will be born. Jesus was a Jew which might be another ground why December 25 was selected as Christmas Day by the early Christians.

December was a month for celebration by the people in ancient times. It was the time of the winter solstice, the briefest time between the rising and the setting of the sun.  It was celebrated by all of the northern tribes.

The Romans celebrated the Saturnalia, honoring the Roman God, Saturn. Also, the celebration of the “Dies Natalis Invicti” or birthday of the “unconquered sun” falls in this month. Jesus was identified by Ambrose (one of the Great Church Fathers), as the “Sun of Righteousness”.

Further, it is speculated that if Christmas looked like a pagan celebration, the non-Christians wouldn’t mind and would welcome a new holiday. Some aspects of the present Christmas festivities resemble pagan jubilees, like the giving of gifts and merrymaking which were done in the “Saturnalia”; the lavish foods from the Teutonic fetes; and the sparkling lights and green trees from the Roman New Year. 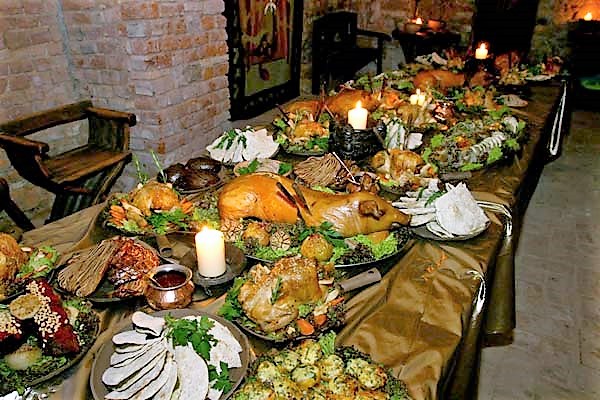 Of course we feast.

During Medieval times, the holiday came during a period after the crops had been harvested and there was little to do on the farm.  If animals were not to be kept over the winter it would be a good time for them to be slaughtered for food.  This would leave a bounty of food which would make Christmas the perfect time to hold a feast.

Even among lower levels of wealth the meals were elaborate affairs.

Among the peasants, local lords would supply food and drink.    For example, in the 13th century a shepherd on a manor in Somerset was entitled to a loaf of bread and a dish of meat on Christmas Eve while his dog would get a loaf on Christmas day.

Wassailing is a very ancient custom that is rarely done today, though we have all heard of it.  The word ‘wassail’ comes from the Anglo-Saxon phrase ‘waes hael’, which means ‘good health’. Originally, the wassail was a drink made of mulled ale, curdled cream, roasted apples, eggs, cloves, ginger, nutmeg and sugar. It was served from huge bowls, often made of silver or pewter. Wassailing was traditionally done on New Year’s Eve and Twelfth Night, but some rich people drank Wassail on all the 12 days of Christmas.

“Here we come a-wassailing among the leaves so green…..” 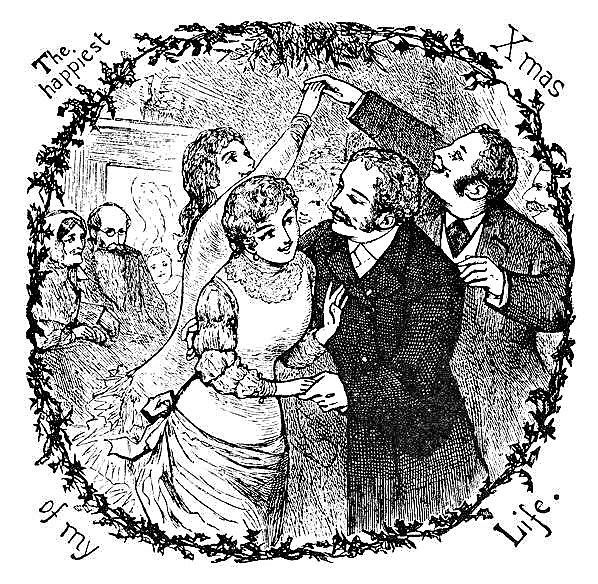 Kissing under the mistletoe?  Rooted in Norse myth and before.

In the days of the ancient Druids, (around 300 BC) mistletoe was highly regarded for its healing properties,  It was used to treat many ailments, but the fact that it flourished even in the harshest of winters made people believe it could cure infertility.  The whole kissing thing didn’t come about until centuries later when Scandinavians shared their stories of the Norse gods.

We have the goddess Frigga to thank for the mistletoe taking on even more of an amorous association.  As the myth goes, Odin and Frigga, his wife, had a son maned Baldur who was prophesied to be killed.  Frigga met with all living things urging them not to harm her son.  She forgot to reach out to the unassuming and non-threatening mistletoe, which the evil Loki used to forge a spear which brought down Baldur.

The tears Frigga cried over the body of her son became the berries found on the mistletoe and she decried that the plant would never be used as a weapon again.  Instead it would become a symbol of love and she vowed she would kiss anyone who walked underneath it.  During this period Norse lovers would stand under the mistletoe after an argument trying to reconcile.

So how did mistletoe get to Christmas?  Dickens, of course,  He makes reference to kissing under the plant in his “The Pickwick Papers.”

And our “Friday” is named after the goddess Frigga.

Now all of this seems pretty familiar but there are a few medieval Christmas traditions we would probably find a bit – if not a lot – weird.

Take the “Christmas Bishop” for example. 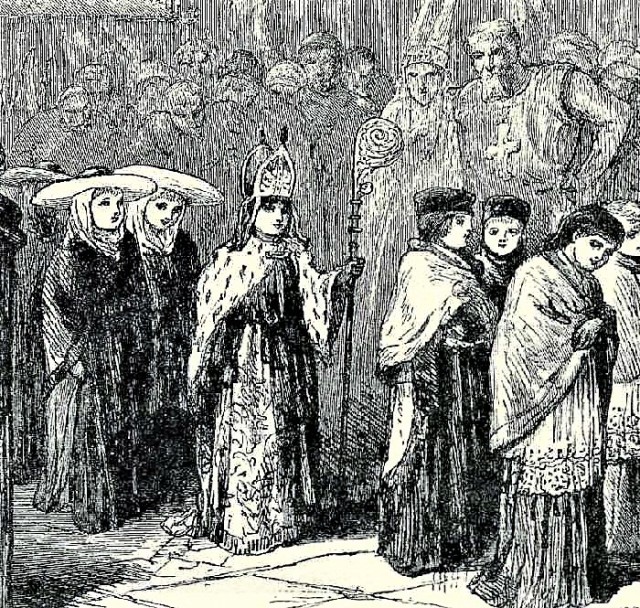 In parts of Western Europe one finds reports of the election of boy bishops on December 28, which marked the feast of Holy Innocents, the massacre of the first born by King Herod.

In England the practice can be found dating back to the 12th century, where boys were elected as Bishops in churches or schools.  The boy might be dressed up in vestments and would celebrate a mock mass that would include preaching a sermon.  Afterwards he would go out in a procession where he would receive gifts of money and food.  Even English Kings would participate.  Edward I had one boy bishop say vespers before him in 1299 and his son Edward II awarded another boy bishop ten shillings in 1316.

Of course our boy bishop for a day had duties to perform.  He would marry any young couple who asked and provided and appropriate gift.  The “marriage” was “valid” for one night only.  We are left contemplating how the happy couple spend their Christmas honeymoon.

Picture asking her over a Christmas bowl – “Honey would you marry me for one night?”

Once upon a time there was much rolling of dice on Christmas, particularly in Spain and France.  The Spanish crown held a monopoly on gambling houses and all were prohibited from gambling outside of them.  On Christmas, the monopoly was suspended for the day and everyone was free to roll dice for money wherever they wished.

The tradition of creating the crib and nativity scene originated in Italy and has been traced to St. Francis who constructed one in a cave in the town of Greccio in 1223.  The custom spread to Rome and Naples and then throughout Europe.

Christmas was a big deal during the renaissance in Italy.

During the reign of Galeazzo Sforza (1466-1476) Christmas was the most important date in the city state of Milan.  The Duke and the city prepared for the twelve days of Christmas, seven of which were official holidays.  It was so important for the Duke that he sent orders to all the nobles to spend Christmas in Milan unless they were sick, along with courtiers, beauocrats and foreign ambassadors. 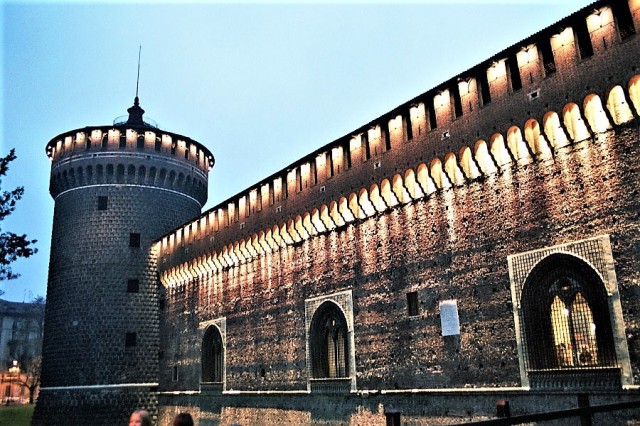 Palazzo Sforza in Milan – been there!

The highlight of the festivities took place on December 24th, at a ceremony known as the Ciocco, which was held in the main hall of the Duke’s palace.  The ceremony was the Miliaese equivalent of the Yule Log.  The log itself was garnished with fruits and foliage, juniper and laurel.  It was brought in at sunset, put in the fireplace and set aflame to the jubilation of all.  A banquet followed the ancient ritual of fire and renewal and repeated on New Years Eve.

What about elves?  Icelandic myth of trolls coming out on Christmas Eve to perform evil deeds.  Santa turned them into nice guys.

And I guess we can thank Prince Albert for the indoor Christmas tree?

Pagans?  Who us?  Well the days of the week in English are Sunday (for the sun), Monday (for the moon) Tuesday (for the Norse god Tyr; pronounced tiw) Wednesday (for Odin or Woden) Thursday (for Thor) Friday (for Frigga) and Saturday (for Saturn),  Nothing pagan about us.

Best wishes for Christmas from sunny Florida.  Deck the palms.

And then of course there are Mummers.  If you’re from Phillie you know what Mummers are.  If not, you can look them up on Wiki.

I was born during year four of the reign of Emperor Tiberius Claudius on the outskirts of the empire in Brooklyn. I married my high school sweetheart, the girl I took to the prom and we were together for forty years until her passing in 2004. We had four kids together and buried two together. I had a successful career in Corporate America (never got rich but made a living) and traveled the world. I am currently retired in the Tampa Bay metro area and live alone. One of my daughters is close by and one within a morning’s drive. They call their pops everyday. I try to write poetry (not very well), and about family. Occasionally I will try a historical piece relating to politics. :-)
View all posts by toritto →
This entry was posted in history, Uncategorized. Bookmark the permalink.

4 Responses to On Christmas Traditions