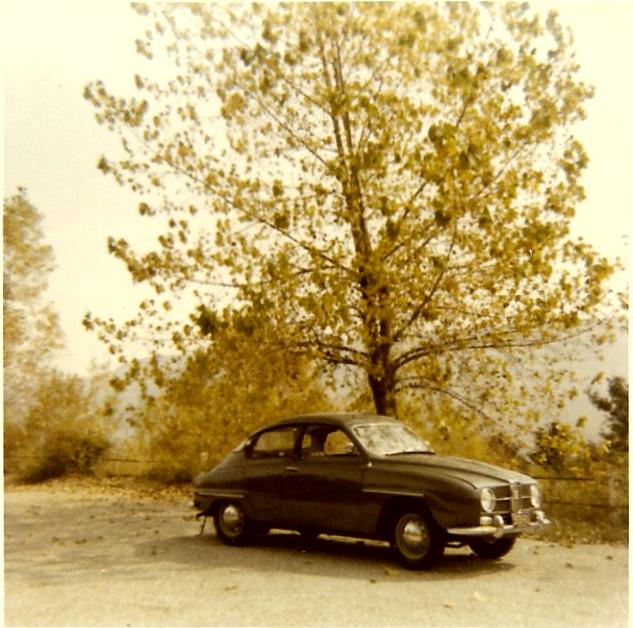 Yes, I know there is a lot going on here in America worth writing about.

The election re-count is on and Republicans are screaming like mad.

Our illustrious President is screaming for the re-count to be stopped.  The election is being stolen!  The election officials are crooked!  There should be an investigation!  STOP THE COUNT!

We had another mass shooting last week – the third in two weeks.  Still no serious talk of gun controls.

Emperor Trump got the cold shoulder in Europe over the Armistice Day weekend.  I don’tthink he liked how he was treated by Europe and the world.

But I don’t want to write about any of that today.

I want to write about a car.

In it I mentioned I once owned a 1868 Saab which drew a comment from Pete in Beetley:

Pete reminded me after 50 years how famous that little car was and how I once was very much the car buff.  It was the time before children when I could live with a car which was a bit exotic and didn’t have to worry about whether or not a car seat or a wheelchair would fit in the back seat.

That 1968 Saab was the first new car my wife and I purchased when I left the Army.  Life was good – I was back in the bank, Joann was sorking, DINKS!   (dual income, no kids!) and we had a new home and now a new car.  Life was indeed good.

Why was it so famous that strangers beeped at me on the road and smiled when they saw it?

Well, it was the ultimate Swedish “basic car” – solidly built and virtually indestructible.  It got you where you wanted to go – with no fuss and much elan.  It exhibited gem-like qualities; basic truths about what a machine to transport you should be.

It has only seven moving parts!  It would not wear out!  It had front wear drive at at time when it was virtually unknown in America.  Its weight was over the drive wheels so it wouldn’t spin out unless you were deliberately trying to do so.  It would break any speed limit in the United States with only 60 horsepower and easily got 35 miles per gallon.

For all of those back then who questioned whether Detroit or somebody could build a sensible car, Saab was it.  The absolutely, no frills, sensible car.

Saab never sold many in the U.S; –  primarily they were exporting all they could to America and never had an extensive dealer network.  In fact it had no dealers west of the Mississippi.

Besides – it was the perfect New England car.

Safety?  It had a built in roll-cage which Saab tested by rolling the car off mountains – sideways!  A rally driver named Erik Carlsson once rolled one in a race and at the finish no one noticed until it was noted that the light on his roof was gone!  Of course he lost no time on the rally leg!

As for mileage, 40 was doable, 35 MPG routine.  The engine had an in-out freewheeling device so that every time you let off the gas, the engine dropped to an idle as you coasted down the highway as if on a bicycle you were not pedaling.

The engine was a 2-cycle; think of it as a 3 cylinder lawn mower engine.

Longevity?  Three connecting rods attached to three pistons operating inside a block.  No valves.  No cam shaft.  No adjustments needed.  simply pump 8 gallons of regular gas and pour a quart of 30 weight oil into the gas tank and drive.  As complexity went down, wear and tear was dramatically reduced,   The aerodynamic steel body-cum-chassis was so tough it made Pentagon tanks look like gossamer.  A lot of much more expensive American cars at the  time looked like post war Japanese toys.

And at a curb weight of just over 1,900 lbs. tires lasted just about forever.  And though you changed a lot of plugs and points, you only had three to change.  And you got a handy plug remover with the car.  Even on a knuckle cold winter’s day I could change the sparkplugs in about 3 minutes.  I recall changing the front shocks in my drive way myself!

Everything under the hood was easily accessible to a layman and built like a Swedish gold ingot.

Handling?  It could stick with any over the road vehicle of the time as its rally racing record indicates.  And when it got slippery it got even better.  Its record of victories in over the road racing was incredible and in rally events anytime this Saab didn’t win was newsworthy.

Of course sales were never spectacular.  It didn’t do anything.  It didn’t make you feel more masculine, richer, better than your neighbor.  It wasn’t showy or show off.  It didn’t pacify frustrated jet pilots or cure your fears about impending impotency.  No none bought it for creepy psychological reasons; it was only bought by people who simply had to have one!

What was it like to drive this cool dream of straight forward mechanical rationality?

Well with middling torque from an 850 cc 2 stroke engine you had to goose up the gas and slip the clutch to get satisfactory starts.  Keep the RPM up and the engine would gather itself together.

On the road it was as if the little engine that could found a whole new range, cruising effortlessly at 80 mph all day.  It would wear you out long before you strained the Saab.  No wonder it won road races!

Steering was a bit heavy, a natural occurrence with 15 inch wheels and most of the cars weight in front.  Four speed on the column and perfect instrumentation coupled with really comfortable seats completed the package.  With free wheeling, down shifting was a breeze.

The car was never built for genteel driving.  Eventually it would bore you and you would begin to thrash it.  That’s when the car came alive.  The harder youpushed it, the more amazing it became.  Get into a hard corner with a lot of power on and the car would slightly hop the inside front wheel, perhaps smoke the tire.  But no matter how you went in, you went go through rock steady, perhaps cocked over on your ear, all four wheels getting a ferocious grip, with a little tire squeal but under control

And it did so utterly without showmanship.  Push it on a winding mountain road and it would leave you thunderstruck.  And therein lies it contradiction.  It was supposed to be so rational; pedestrian.  Practical,  Won’t wear out.  Basic; to be used in a rational way.  Plain Jane with good sense written all  over it.

Yet it fostered simply manic driving, winning race after race – and beeps and hollers from the auto cognoscenti on the road.

It was the perfect car for New England skiers and Vermont store-keepers.

It had only one flaw.  t could not be air conditioned.  So when I lived in the long hot summers of North Carolina it was time for it to go.  JoAnn was never one for the heat.

Sadly I said good by to my Saab 96.  I traded it in for an air conditioned  DOHC FIAT 131S Mirafiori!  Also fun to drive!