Those of you who have spent time in Rome or in many other cities in the world have seen them.

Egyptian obelisks.  Those four sided monuments topped by a pyramid shaped point.  The Washington Monument is an American shaped copy though one cannot enter the genuine article.

Once they all stood in ancient Egypt, monuments to the greatness of  the Pharaoh who created them and the glory of his reign.  The ancient Egyptians made a number of obelisks which were mostly placed in pairs at the entrances to temples.

Of the 28 existing obelisks standing today, only 6 are in Egypt.  The rest are located in London, Paris,  Istanbul, New York and Rome.  Why each of these treasures stands where it is today is literally a biography of each.

After standing in Egypt for a thousand years plus (the oldest surviving obelisk is over 4,000 years old) there came a turn when the Emperor Augustus began moving them out of Egypt commencing after his defeat of Antony and Cleopatra.

In the late 20th century Egypt herself decided she needed a pharaonic monument for her capital city; an obelisk of Ramses II was moved from Tanis on the Nile Delta and now stands on Gezira Island in Cairo.  I have stood in its shadow.  The movement of each obelisk from its original place was carried out as part and parcel of a political and social agenda.

All of the obelisks however, no matter where they now stand or how they got there have in common that they all once stood in the ancient sands of Egypt.

It is in Rome’s piazzas and streets where 13 obelisks of which 8 are Egyptian stand today, brought home by the emperors.  The Romans used special heavy cargo carriers called obelisk ships to transport the monuments down the Nile to Alexandria and from there across the Mediterranean to Rome. On site, large Roman cranes were employed to erect the monoliths. 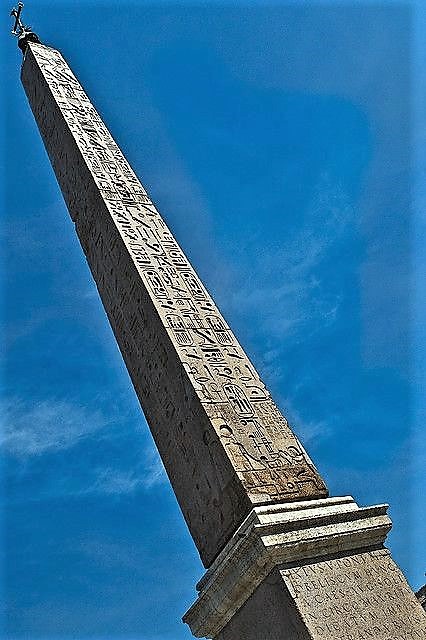 The tallest, created by the Pharaohs Tutmoses III and IV,  stands in front of the Lateran Palace and the Basilica of San Giovanni in Laterano.  It was originally brought to Alexandria from the Temple of Amun in Karnak and then to Rome in A.D 357 by Emperor Constantius II and was erected on the spina of the Circus Maximus.   Found in three pieces in 1587 it was re-erected where it stands today by Pope Sixtus V.  The equestrian statue of Marcus Aurelius was moved to Capitoline Hill to make room for it.

In the Piazza del Popolo stands a monument of Seti I, brought to Rome by Augustus in B.C 10 which also stood in the Circus Maximus and was found in two pieces next to the Lateran obelisk.  It too was re-erected by Pope Sixtus V where it stands today. 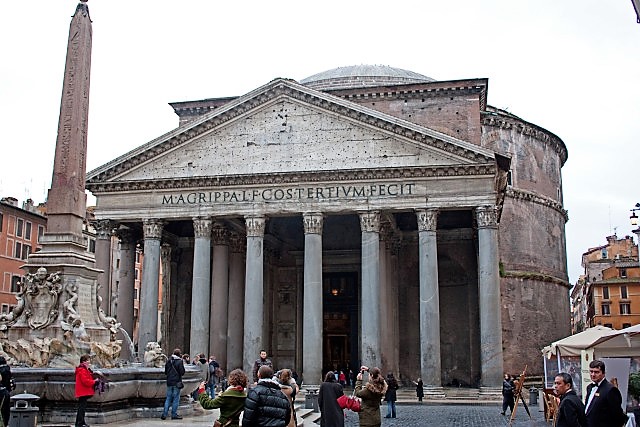 An obelisk from the Temple of Ra at Heliopolis, built by Ramses II stands in front of the Pantheon.  It was found buried in 1373 and simply re-buried.  Uncovered again it was re-erected by Pope Clement Xl in 1711 where it stands.  There s another behind the Pantheon brought to Rome by Diocletian. 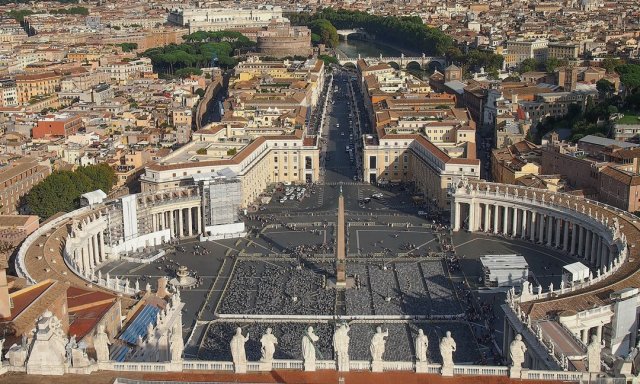 The obelisk most seen however has got to be the one in front of St, Peters Basilica in the Vatican.  In virtually every photo of the square and the dome there stands an ancient Egyptian obelisk – a great pagan symbol directly in front of the center of the Roman Catholic world.  It is the only obelisk in Rome that has remained standing through the ages, never having toppled once.  It is estimated to be some 4,000 years old.

Why is it there and what is the history behind the Vatican needle?

After Augustus triumph over Antony and Cleopatra it was raised in Alexandria around 30 B.C.  in the Julian Forum by the prefect Cornelius Gallus on Augustus’s orders as a monument to his family.

Sadly, little is known of its origins or which Pharaoh ordered its construction as it has no hieroglyphs on it that would record that information.  It was certainly quarried in Egypt and intended to be erected in Heliopolis when Octavian, now Augustus had it moved and erected in Alexandria as a monument to his victory over Antony.

On the other hand, church archives indicate the obelisk definitely comes from Heliopolis, Egypt, where it was built by the Pharaoh Mencares in 1835 BC in honor of the sun.

And there it stood in Alexandria until the Emperor Gaius Julius Caesar Augustus Germanicus came to the imperial throne.  He would be known in history as the Emperor Caligula. 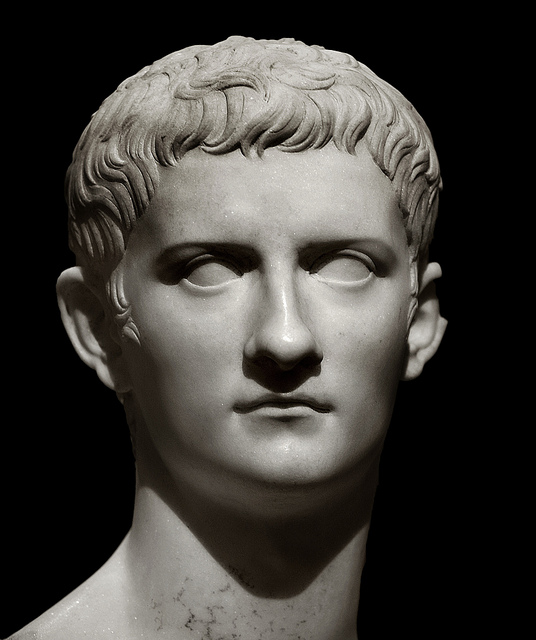 The third of Rome’s emperors, Caligula  achieved feats of waste and carnage during his four-year reign (A.D. 37-41) unmatched even by his infamous nephew Nero. The son of a great military leader, Germanicus, he escaped family intrigues to take the throne, but his personal and fiscal excesses led him to be the first Roman emperor to be assassinated.

One of Caligula’s extravagances was his circus; the Circus Maximus wasn’t quite good enough for him.  He began to built his own on what was then Vatican Hill.  And his circus needed a nice pylon worthy of his circus.

And so Caligula thought of the great obelisk in Alexandria raised by Octavian Augustus to honor his victory over Antony and ordered it be brought to Rome to serve as the pylon in his new circus.

For, you see, Gaius Julius Caesar Augustus Germanicus was the great-grandson of Marc Antony and perhaps this was his way of showing his ultimate triumph.

Prior to the civil war between Octavian and Antony, the former had given his sister Octavia as wife to Antony.  Antony fathered three children with her before abandoning her for Cleopatra.

Gaius Caligula had the obelisk brought to Rome in 37 A.D.  Today it is approximately 85 feet high and weighs about 326 tons; historical records indicate it was once significantly larger.  It was originally erected in Caligula’s gardens which he had inherited from his mother and then moved to the spina of the circus that he started and was completed by Nero due to his untimely demise.  Nero called it Nero’s Circus.  Much of the circus is under the Basilica and square, the original spot for the obelisk is near the present day sacristy just south of the Basilica.

In 1586 Sixtus  V decided he wanted the obelisk, still standing since Caligula’s time, moved to the center of St. Peters Square.  Given the difficulty of moving it, several projects were considered until Sixtus V entrusted the job to his favorite architect, Domenico Fontana,  His plans met with the Pope’s approval and on April 30, 1586, transport was begun, after a solid foundation had been built to support the obelisk in the center of the square.

The operation, which is illustrated by several engravings, was carried out using hemp ropes and iron bars weighing 40,000 pounds, plus 900 men and 72 horses, and was completed on Sept. 10 of the same year.  Three hundred fifty six years later to the day, Toritto would be born into the world.  🙂

On top of the obelisk had been a golden ern which, it was rumored during the middle ages, contained the ashes of Julius Caesar.  It was taken down and opened.   Reportedly it contained only dust.  It was replaced with cross atop the obelisk today – said to contain a relic wooden remnant  of the “true cross.”

Sure it does.  I wonder if Caesar’s ashes were in that golden urn.

The inscriptions on the north and south sides of the base have texts written by Cardinal Silvio Antoniani as a memorial to the moving of the obelisk. The east and west sides have exorcist formulas.

It also functions as a sun dial, its shadow moving over signs of the zodiac in the paving of the Square.

Stand in its shadow with an espresso and think that what you are seeing has been viewed by Egyptians at Heliopolis, Augustus, Caligula and every emperor of this city.