Living With The Birds 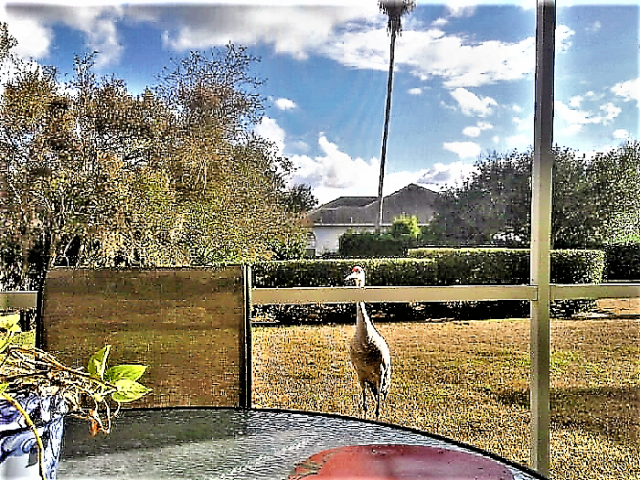 Recently I have posted photos of sand hill cranes parking themselves under a live oak tree in front of my home.  Most of you know I live in a semi-rural area of the Florida gulf coast.  My house is of sturdy concrete block and located some dozen miles from the beach so I don’t worry about hurricane storm surge.  It helps that we are at an elevation of 69 feet above sea level which is practically a mountaintop in flat Florida.

There has been some recent development around here during the last several years.  We now have a modern grocery. two gas stations, a Dunkin Donuts, a  UPS and a liquor store close by.  The road to the coast has been widened.    My eldest daughter still thinks I live in the boonies.

Looking at yesterday’s photos you would think this was a routine development of modest homes inhabited by mostly retirees.  You would be right but we are only a single street of  modest homes; most of the homes in the surrounding area are much grander than ours and house younger families with school age children.

Why would cranes hang out here?

You need to see behind my house at the great open space.  In the photo above you see a crane staring at me through the screens.  Across the road is a very comfortable home once owned by a Swiss family.  Each winter I would hear the children speaking German around the pool.  That house is the last house on that side of the road – it borders a great swamp to its right out of the view of the camera.  It has a “sea wall” separating it from the water, though I have been here 14 years and never seen the water approach it.

Now take a look at Toritto’s morning walk and you will know why the cranes live here – along with herons, hawks, turtles, armadillos, turkey vultures, assorted song birds  and an alligator.

Across the road behind my house.

The swamp is controlled by our homeowners association; no boating, fishing or hunting of any sort is allowed.   As a matter of full disclosure, I live in a gated community but our gates are open to the public each and every day and only close at sundown.

And if you think it takes a lot of money to live here you would be quite wrong.

It doesn’t.  You need to be lucky enough to find an available house for sale.

Mine was the last one built here – fourteen years ago.

5 Responses to Living With The Birds