On Religion – Or My Lack Thereof – A Re-Post

Those of you who consider me a socialist pinko commie radical may be of the opinion that I am not a religious man.  You would be right.

I was an altar boy of the Tridentine Mass as a kid and raised as a cultural Catholic.  My parents did not attend church but I received First Communion and Confirmation; I think they did it because my grandparents were still alive and it was expected.  On the other hand I don’t recall that they were church goers either.  Grandma was a red.

Italians always had a somewhat different view of Catholicism than the Irish; Many Italians viewed the church as a political institution.  The Papal States allowed the church to wield temporal power; many Italians lived everyday with the Pope as their ruler.

I received religious instruction in elementary school; although I attended public school we Catholics were dismissed at 2 PM on Wednesday afternoons and marched across the street to the Catholic school for two hours of catechism lessons.

I distinctly remember I had an astronomy picture book with me one day and a nun told me not to believe that nonsense; “God created the world”.  I got the message. 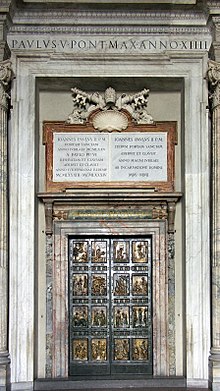 I’ve been to St. Peter’s In Rome twice; both times during Jubilee years.  One is considered lucky to have done it once in a lifetime – a Jubilee year usually comes around every 25 years.  St. Peters in Rome has a holy door (porta sancta in Latin). The door is normally sealed shut from the inside so that it cannot be opened. It is opened during Jubilee years, when pilgrims enter through the door to gain the plenary indulgence connected with the Jubilee.  I went through twice.  Google plenary indulgence if you have no idea what that is.

I have visited the Badshahi Mosque in Lahore and numerous other world famous mosques in Cairo and Dubai while spending three Ramadans in Muslim countries.

I’ve attended services at both the Westminster Abbey and Westminster Cathedral.  I touched the Western Wall with Orthodox Jews in Jerusalem and visited the Church of the Nativity.  I was in Mumbai for Diwali and was on Elephanta Island in the Shiva Caves for Shivarati.  I walked in the largest Buddhist temple in Sri Lanka.

Yet I do not believe.  But I’m not in your face about it.  I simply live…..quietly and without religion.  I am not an in your face atheist.  I try to convince no one.  I try to live rationally – for I believe that this is all there is – this time; this moment.

I do not believe we were “created in the image of God” along with the rest of the universe notwithstanding that Mormons believe the Garden of Eden is in Missouri.  We are animals (as opposed to being plants) sharing most of our DNA with our dog or cat.

I do not believe the world is only five thousand years old or that dinosaur bones were somehow “planted” where they were found.  I do not believe that any religion is literally “true” notwithstanding that each of the major religions claims to be.  I do not believe in a “god” that needs to be obeyed, worshiped and adored – kind of like a king of ancient times.

I guess when I was a kid it seemed obvious to me that where you were born and what religion your parents practiced determined your own “beliefs”.  As an Italian there was a good chance I was going to be Catholic.  Had I been born in Saudi Arabia there is a really good chance I would have been a Muslim; if in India most likely a Hindu.  If my parents had been Jews, I would be Jewish.  Religion is culture; “truth” had nothing to do with it.  My parents were culturally Catholic but didn’t practice – maybe because my mother spent years in an orphanage run by nuns.

Does Catholicism have a greater claim on truth than any of the others?  And if I thought my religion “true”, why was it true and the others not?

As I got some scientific learning it dawned on me early on that each of the major religions had a “book”, each written by men thousands of years ago; men who had no idea why the sun rose in the morning.  The earliest civilizations gave explanations for those things they could not understand – it was the Gods that made the sun rise and the crops grow.

The Egyptians did it in a big way.  And the Egyptians were the first to live for the “after life”.

Monotheists look down on “pagans” – those who believed in gods and goddesses before being enlightened by the truth of “the word”.   Even the term “pagan” is derogatory – kind of like ignorant of the truth; unenlightened.

I happened to like the Greek gods and philosophy.  They make me smile.  They were just like us with all of our strengths and foibles.  And the Greeks never spoke of a heaven or paradise – only Hades; the underworld, which was just the place where we all wound up.  No judgement of how we lived our lives.  No hell fire and damnation.

And the Greek gods never stifled the search for knowledge and scientific truth.  Catholics did.  Ask Galileo.  Indeed the triumph of Christianity and its climb to temporal power through the Emperor Constantine probably stifled the search for knowledge for a thousand years.  Ideas like the earth revolving around the sun were heresy and were to be quashed.  Religion still paralyzes a good portion of the globe today.

Now I have not studied “theology”; because other than from a perspective of the history of religion I think it’s a waste of time – kind of like arguing over how many angels can fit on the head of a pin – which assumes of course the existence of angels.  Arguing with a learned theologian is pointless; they have faith.  I do not.

Is there something to take from religion?  Well yes.

I believe that Jesus was a great teacher worth emulating.  The world would be a much better place if we all acted like him.  That is enough for me.  Do I believe that he is literally the son of God and rose from the dead?  No.  No more than I believe that the Eucharist is the actual body and blood of Christ under the appearance of a wafer.

And finally we have religion because we all fear death.  All religions have a life after death – heaven, hell, paradise, reincarnation.  Death is not the end; what religion would teach that it was?

When I die I will not see my girl again, my sons, my mom and dad, my brother.  We will not meet on that beautiful shore; there is no beautiful shore any more than there is a Styx.   Best to love them while you are here.

45 How many are your deeds,
46 though hidden from sight.
47 O sole God without equal !
48 You made the Earth as You desired, You alone.
49 With people, cattle, and all creatures.
50 With everything upon Earth that walks on legs,
51 and all that is on high and flies with its wings.

You make all arms firm for the King,
87 every leg is on the move since You founded the Earth,
88 You rouse them for your son, who emerged from your body

the Lord of Crowns, Akhenaten, great in his lifetime.
90 And the great Queen whom he loves,
the Lady of the Two Lands :
Nefer-neferu-Aten Nefertiti,
who lives and is rejuvenated forever and ever.”

From the walls of Amarna – a portion of the Great Hymn to the Aten  written by the monotheist Pharoah Akenaten – 18th dynasty – 1160 B.C.

Read the entire hymn and compare it to Psalm 104.  The Great Hymn to the Aten was written hundreds of years before the first texts of the bible.