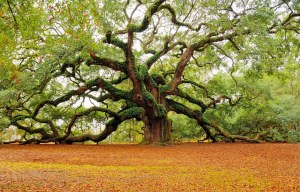 Once in a Winter of discontent
I walked in furrows of deep crusted snow
through a forest of spindly birch and pine
and came upon the ancient oak.

Twice the girth a man could ere embrace;
ten times as thick and twice as tall as they
scarred bark where once strong branches thrived
where now ungainly limbs, gnarled hands and fingers splay

Standing aged, stern and ever scornful
of the sickly birch and pine;
like me
refusing to believe Spring sun would ever shine

nor would we yield to it’s charm.
“There is no Spring! No charm! No happiness!”
Look at my broken, barked fingers sticking out
where they have grown,  from back and side

As they have grown, so I stand
so I am! and I do not believe
in your hopes so grand;
in your lies.

Wild flowers grew beneath it’s limb
yet it stood among them scowling
rigid, misshapen
ever grim.

“Yes” I thought
the oak is right;
let others young yield to hopes and dreams
for we two know our lives are naught.

Some years later in the Spring
I walked again the forest trod in Winter
and looked upon the same old oak,
now quite transfigured

spreading out a canopy of sappy green
it stood, leaves trembling in the breeze;
gnarled fingers, scars nor doubts
were no where to be seen.

Through centuries old bark
leaves had sprouted
even where there were no twigs;
“Yes” I thought; it is the same oak.

“Life is not over!”
The procession of living goes on!
And I was seized by the unreasoning joy
of Spring; of time and of renewal.