A  piece of fiction 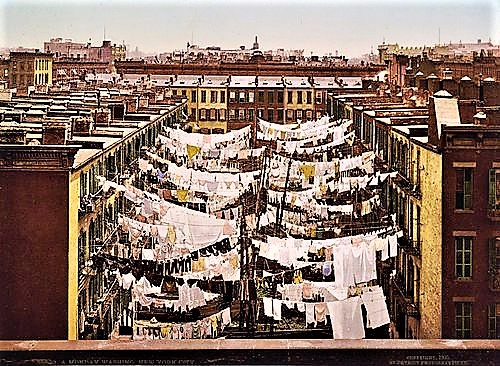 Freddie and Philomena Bartolomeo lived in a small 1 bedroom second floor apartment in Brooklyn’s little Italy along with their two sons, Fredo and Nicola in 1950.  The place was small with four of them;  little Nicola still slept in the bed room with his parents while Fredo slept on a Castro convertible sofa.   “Comfort, beauty and style!”

The entire brown brick three story building was inhabited by Italians, mostly from small towns in Puglia, on the heel of the boot around where one might place the stirrup.  Now these folks had a well deserved reputation of speaking the worst Italian in Italy.  And their English, except for the boys, wasn’t much better.

They were doing ok in America.  Freddie was a stone mason and had regular work.  They even had a small television, a 12 inch RCA “Anniversary Model” with a metal cabinet three times as large as the screen.  It was prominently displayed in the kitchen for all to see.  The Bartolomeos were one of the first on the block to own a television.  Soon antennae began sprouting on all the Brooklyn rooftops.

What nobody in the building owned was a washing machine.  Once a week Philomena would get out her washboard and scrub the dirty clothes by hand in her double sink, hanging them out to dry on the clothes line which stretched from her back window directly across the courtyard to the brick wall on the opposite side.  All second and third floor apartments had a clothes line for their use.

Philomena would send her husband’s dress shirts to the local Chinese laundry and they would come back washed, pressed and starched.  Usually only wealthy families indulged in such luxury but without a washing machine Philomena had little choice.  She sent the dress shirts to “the chinks.”   Once she went into the laundry to pick up shirts, realized she forgot her ticket and frustrated, without batting an eye looked at the old man behind the counter  and exclaimed “I forgot my chink’s ticket!”  Life in the fifties.

Now directly above the Bartolomeo’s lived Silvio and Concetta Bruzzese, an older couple also from Puglia.  Their children had grown and they lived alone.

The families knew each other; went to the same Italian language services at St. Rosalia’s church on Sundays.  Fredo and Silvio were both members of the local Knights of Columbus lodge where virtually no one spoke English.

But the families did not get along.  Because of the washing and the clothes lines.

The Bruzzese clothes line stretched across the court yard directly above Philomena Bartolomeo’s clothes line.  So one laundry day Philomena finished her “whites” and hung them out on her clothes line to dry in the fresh air.

Seems the two families had the same “laundry day.”  Concetta also finished her scrubbing and hung out her “coloreds” of red and blue on her clothes line – directly over Philomena’s clothes.

Gravity being what it is, Concetta’s colored laundry dripped onto to Philomena’s, marking her precious whites with red and blue stains.

The curses in Italian began flying between the two women out of the open windows.  And continued in the hall outside of the apartment; and at the mailboxes.  They stopped speaking at church and at the Knights of Columbus.

“That (#$^$*)!  I’ma gonna go up there and kill her!”   When laundry day would roll around each week Fredo and Nicola would look at each other, roll their eyes and make themselves scarce.

Now this was not an uncommon problem in the neighborhood.  This happened all the time and was probably the cause of many a “vendetta” carried on for years, generation to generation.  And so it went on for years between the Bartolomeo and the Bruzzese, not unlike the Montagues and Capulets, until the Bartolomeo bought a new home and moved away.  They never saw Silvio and Concetta Bruzzese again.

They didn’t move far – but they moved up into a modest brick townhome in Bay Ridge.  Silvio got a new Knights of Columbus lodge and Philomena made sure she had a washer and dryer.   Their sons became successful in America finding opportunities they would never have had in the old country.

Freddie Bartolomeo died at the ripe old age of 93 with 6 grandchildren and 10 great-grandchildren, all of whom would gather at the Bay Ridge home on Christmas’ past.  Philomena would pass away only a week later.  She could not imagine life without her Freddie.

Their children and grand-children gathered to plan a funeral and discussion turned to where to bury Freddie and Philomena.  Close-in burial plots had become scarce over the years as cemeteries filled up.  A gigantic new cemetery had opened up but it was way the hell out in Farmingdale, Long Island and this was a time when families visited the graves of the dead.  Nobody wanted to bury Freddie and Philomena in Farmingdale.

They would seek to acquire a plot in St. John’s cemetery, in Queens owned by the Catholic Church.  Grave sites there were tough but a nice donation to the church through the local Monsignor did the trick.  Freddie and Philomena were buried in St. Johns.

Three months later was to be the unveiling of the grave stone.  Yes, there was a time that a grave stone was erected and covered with cloth.  The family would gather at the cemetery and the stone marker unveiled in its presence.

The entire Bartolomeo clan was in attendance – Fredo and Nicola to the littlest great-grandchild.  After the unveiling, Fredo casually walked among the graves.  His mom and dad were buried at the base of a sloping hillside, close to the paved walkway.

The sky was a bright blue and the air was fresh as he thought of his parents.  Looking around as he walked, his mouth fell open and he hurried back to Nicola.

He led Nicola up the hill a bit to a gravestone directly above his parents grave.

They looked at each other and burst into laughter.  Finally gaining control of themselves, Fredo said with a boyish giggle “They say there are many rooms in the Father’s house!”

Nicola replied with a smirk “Just as long as they don’t live upstairs!”

Then again they were both sure that the heavenly house apartments all had washer/dryers.

I was born during year four of the reign of Emperor Tiberius Claudius on the outskirts of the empire in Brooklyn. I married my high school sweetheart, the girl I took to the prom and we were together for forty years until her passing in 2004. We had four kids together and buried two together. I had a successful career in Corporate America (never got rich but made a living) and traveled the world. I am currently retired in the Tampa Bay metro area and live alone. One of my daughters is close by and one within a morning’s drive. They call their pops everyday. I try to write poetry (not very well), and about family. Occasionally I will try a historical piece relating to politics. :-)
View all posts by toritto →
This entry was posted in short story, Uncategorized. Bookmark the permalink.

7 Responses to The Clothes Line