While Pam and Rob embarked on married life together Marie went back to law school, graduating Juris Doctor with honors and obtaining a position in the prosecutor’s office as Assistant State’s Attorney.  She still holds that position, specializing in domestic violence crimes.

When she graduated she was casually invited to the celebration party of a classmate.  So she partied with us and also the classmate.  He would turn out to be her future husband, Joseph.

A year and a half after graduating he asked me for her hand.  He didn’t have to; but he did.

It became official in front of Santa.  Each year these two have their pictures taken with Santa – they will watch themselves grow old together.

and so we began planning the wedding which was held in November 2010.  She was 33. 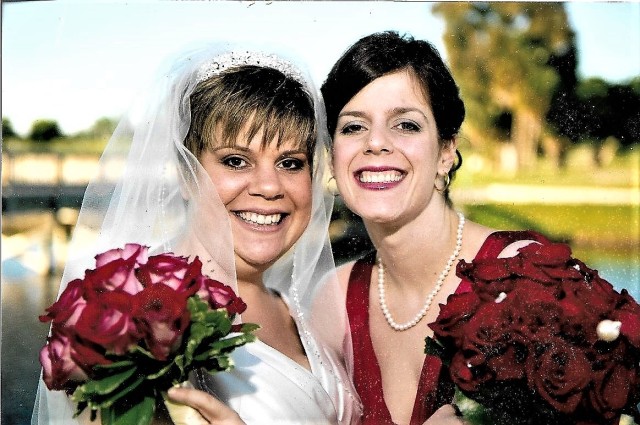 The bride and her sister

A kiss before giving her away

“I now pronounce you husband and wife.”

The bride and groom entering the reception 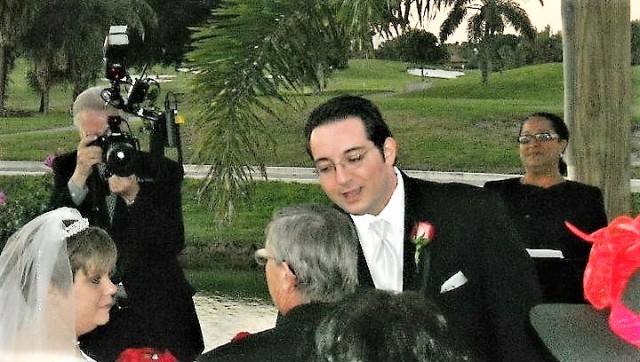 The old guy with the grey hair is me.

But of course the wedding couldn’t go without a hitch.

Several days before the wedding, their honeymoon destination, St. Lucia,  was devastated by Hurricane Tomas.  After two days of trying we reached the embassy in New York and it became apparent plans would have to be changed.

They honeymooned in Vegas instead.

You can read all about it here if you haven’t read it before:

Of course I didn’t tell the bride and groom.  Pam and her in-laws shuffled me to my eye surgeon of choice and my sight was fully recovered on Cinco de Mayo of 2011.

My girls were on their own living their lives while I enjoyed my retirement.  I did the usual things which keep one busy.  House cleaning.  Laundry.  Food shopping.  Doctor appointments.  Keeping in touch with my brothers/sisters-in-law.  Sunday morning donuts monthly with them. My children would visit regularly and on holidays or I would go to Fort Lauderdale. Each year I had everyone at my place for Easter.  Still do.

I discovered I enjoyed blogging.  I started somewhere else but found my way here.  I’m amazed that I’ve had over 50,000 hits on this blog.

And the years rolled by – in the blink of an eye. 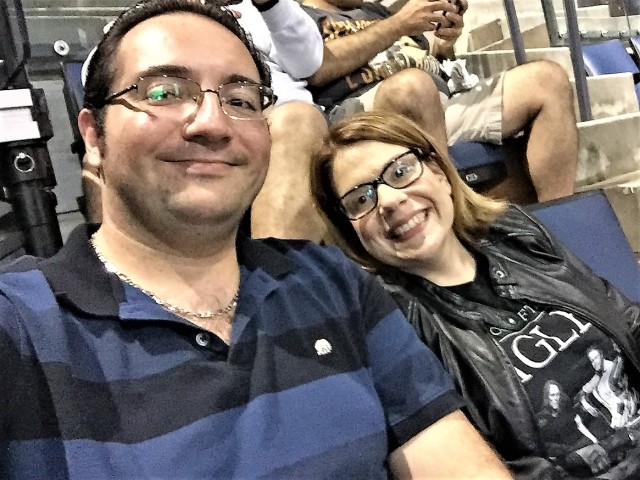 Marie and Joe went to their concerts, sporting events and vacationed in Key West and Las Vegas.  Pam and Rob went to Vegas last year,  spent Christmas in Orlando with Rob’s family and both take part acting in an amateur theater group.  Of course all four of them worked all the time which is, unfortunately, the way it is in America today.  And as my girls moved into their late thirties I can honestly say I never thought of grand children.  Until Easter Sunday 2016.

On that day, before Toritto’s Easter bash, Marie and Joe told me they were expecting.  And I was sworn to secrecy.  Marie would be very close to 40 years old by the time the baby was due and was seeking specialized care.  Finally, weeks later I was permitted to open my mouth.  I would be a grandfather to a grandson. 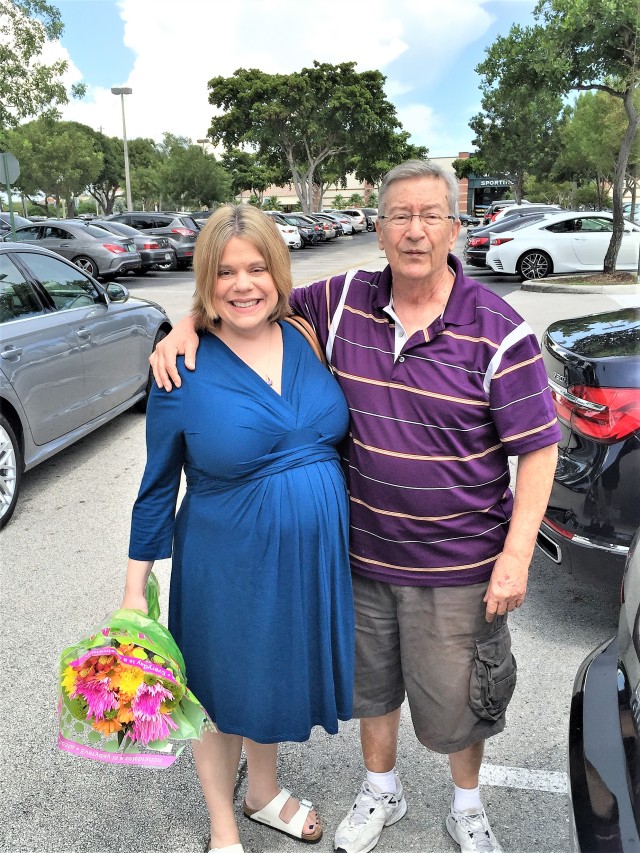 And on the evening that Trump won the Presidency there was still joy to be found in America. 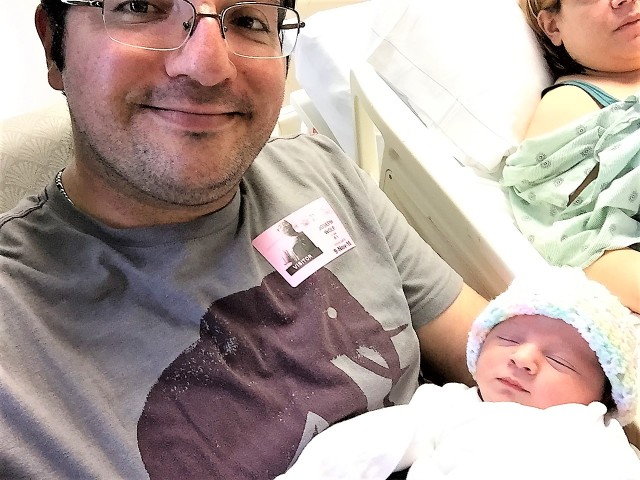 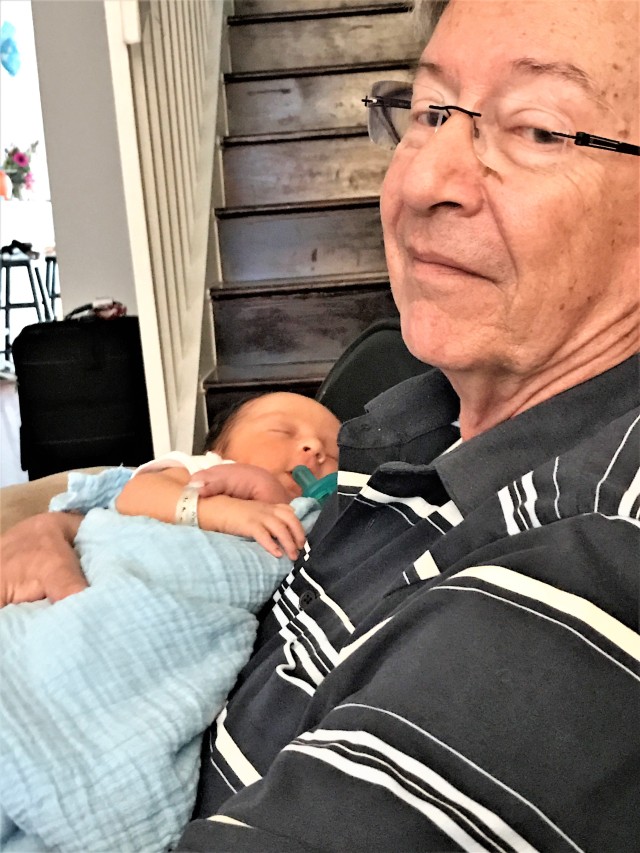 which brings us just about to the present. 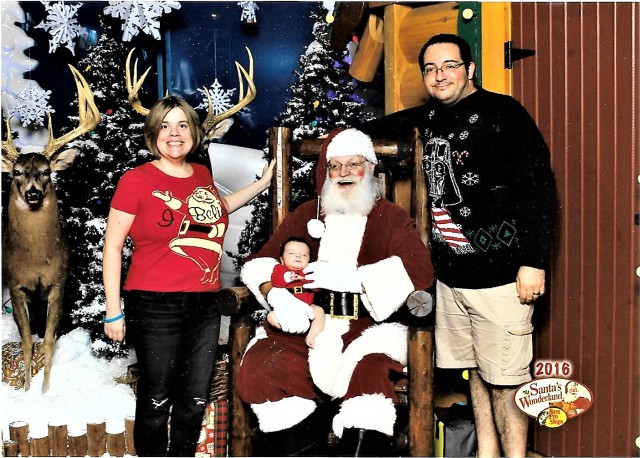 A couple of weeks after Clark’s birth.  The family Christmas photo.

This Easter, as always, was at my house.  Some of the folks in attendance were not in this photo which was taken in the evening.  Pam’s in-laws for example.  My neighbor, a woman in her 80s and also a widow.  Some who would attend each year are now gone.   There are three widowers in this photo.  Myself and my two brothers-in-law on my right.  Our wives and also a good friend who passed several Easters ago are not here.  There are two in the photo who would very unexpectedly lose their wife / mother since this photo was taken and the old widow next door passed away last week.  Her daughter knocked on my door several days ago to thank me for being so kind to her.

But there was a new attendee this year – Clark Cassius being kissed by his daddy.  And the boyfriend (upper left) of my young niece on the lower left.

Tomorrow my brother-in-law Buddy (his real name is Angelo), directly to my right will be 80 years old.  His daughter, the blond directly between us, is giving him a birthday party Friday.  I bought the best bottle of Chianti I could find.

The father/daughter dance song at Maries wedding.  I danced around the house with her to this song when she was a baby.