Our home back in New Jersey.   I was in my early fifties, the girls were in high school and I could no longer be bothered with lawns.  It was a condominium with the association responsible for all outside maintenance, including roofs and siding.  The house was originally built of California red wood and quite attractive.  Eventually the association got tired of the maintenance and all of the houses were aluminum sided.  It was originally a pale yellow but it’s hard to see in this picture.  I planted the shrubs.

A decade had passed, the girls were in high school and we celebrated 30 years together.  At the bank we got a new Chairman.  He had been CEO of one of the major Baltimore banks which had been acquired.  He was available.  When our Chairman retired, he got the job.  He forced the retirement of our President and brought in someone he had worked closely with at his former institution.  One by one our management was replaced.  We were now the largest bank headquartered in Baltimore still independent.  It was just a matter of time.

My time came.  Good severance package and a locked in pension. I still receive a monthly check from the place.  The bank had been closely working with a major upstate New York bank and it was obvious who the acquirer was going to be,  When it came, 30% of the bank’s staff, including all of its management was let go.

I was 50 years old, a relatively well paid Senior Vice President – and out of work.  There were no jobs for me in Baltimore; every bank was owned by out of state institutions.  The “too big to fail” institutions were being built.

Where did I end up?  Back at the great American travel and credit card company I had left 20 years before.  It meant a move – back to the same town where we had bought our “dream” house and buried Daniel two decades earlier.

“While he was looking for a house he took time to visit the grave of his first born, Daniel Jason. It was raining slightly as he sat under the tree, near the stone. It had been twenty years and here he was – living in the same town and working for the same company.  What had been accomplished?  His tears fell with the rain.

Little could he know that his daughters would love this town, would graduate from fine high schools and attend Rutgers College and Monmouth University, grow up to be strong, compassionate women and that their mother would carry all the pride in them of a woman who never went to college.” – from “Sons”

But the travel never ceased.  The week after I rejoined the company I was in Mumbai.

But before we leave Baltimore, it is time for an aside.

This is a photo of my in-laws Carmine and Mary on their wedding day sometime in the late 1930s.  Mary had two younger sisters and a brother living in an orphanage since their parents had died.  Carmine not only took a wife.  He took the kids out of the orphanage.  When he married he took a family.  Carmine passed in 1992, our last full year in Baltimore. He worked for years at Eagle Clothes, lived frugally, always had a lovely home and dressed well.  There weren’t any vacations.  He never owned a car.  His parents lived in a downstairs apartment in his home in their old age until they passed in the 1960s. He was there for me when we buried our sons.  Mary passed the week before my wife in 2004.  Neither knew the other was near death.

Carmine, Mary and JoAnn’s older sister Terry at his home in Florida.  The children he had taken out of the orphanage, Katherine, Betty and Vic and their spouses all lived nearby.  They took my in-laws to Italy for their 50th wedding anniversary.  Their houses still stand perhaps 20 minutes from me, now occupied by others.  Their ghosts are everywhere.  They are all gone, including Terry who passed last year.

Back to my travels.

In 18 months I traveled for weeks at a time to London, Paris, Milan, Dubai, Cairo, Mumbai, Delhi, Madras, Karachi, Lahore, Sri Lanka, Hong Kong, and Shenzhen.  My final assignment was in Cairo for six weeks!  All of the work I was doing could be done in New York if the files were computerized.  Understandably this would be a massive undertaking; offices overseas had only one computer in each location for emails from head office.  There were paper files everywhere.  After 18 months of effort I gave up.  I needed to spend more time at home.  I quit, took a pay cut, locked in a pension check and joined New Jersey’s largest bank.  They needed someone with international experience and liked my finance company background as well.  I was going home every night.

and over the decade, the girls grew up 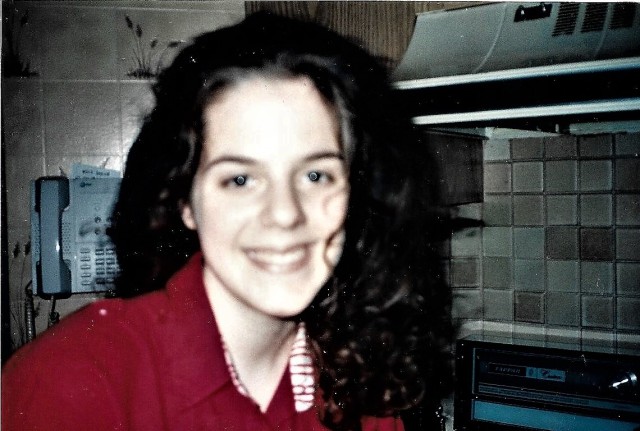 Pam’s first date to the school dance.  I don’t remember his name.

Marie with her proud momma behind our house.

and her proud pops.  She was off to Rutgers University.  She would eventually go to law school here in Florida.  Her mom would not live to see her graduate. 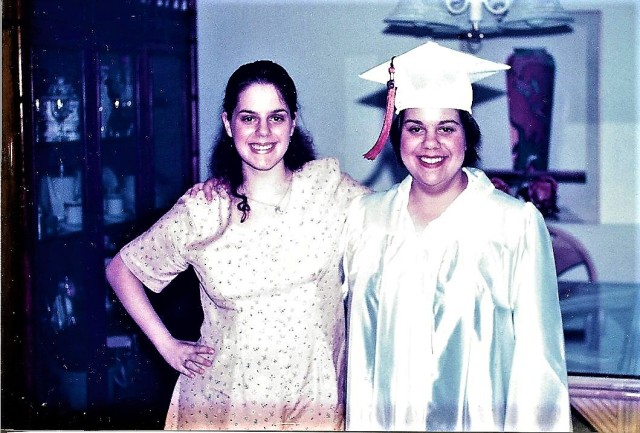 and Pam’s.  She would go on to and earn her degree at Monmouth University.  Each took a high school graduation trip.  Marie toured London, Paris and Madrid while Pam’s graduating class went to Toronto.

Pam’s graduation from Monmouth on a rainy day.  Her mom was there.  I had kept my promise.  She had not been able to go to college.  Girls in our immigrant community didn’t go.  They married young as she did.  She had made me promise her that if we had children and if we had girls, I would ensure they went to college.  I kept my word to her.

Us at the wedding of my cousin’s daughter.

We were getting on and it was time for us to relax and enjoy ourselves a bit.  Alone!  So for my 60th birthday she and I went to Las Vegas.  She loved the place and we would take a break every 3 or 4 months for the next year plus in Vegas.

Us at the Paris.

We did Vegas.  Ate, drank, played slots, saw shows, toured the art museums  (JoAnn loved them because they were empty of people!).  Made love. 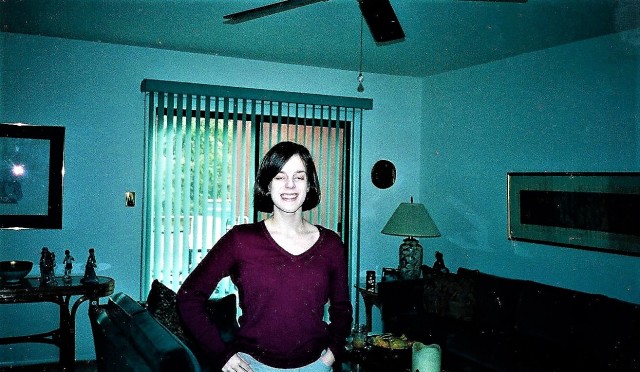 While the girls stayed home

with Trixie the cat.

We began to speak of my retirement; I intended to go at 62.  Besides, with the bank now the largest left in New Jersey I didn’t expect us to last long.  Now, however at my senior level I had shares and options; acquisition would mean a cash windfall.  We began looking for a retirement home and planning all of the things we had wanted to do over the years but couldn’t.  She had always wanted to visit London,  We looked at homes in Vegas, but not seriously.  Then we began looking in Tampa near her family, close in so the girls would have easy commutes to work.

Within months of turning 60 we were acquired by the other Rhode Island bank which acquired the Boston bank which had acquired the bank I had worked for forcing me to leave Rhode Island.  Now they followed me to Jersey.  This time I survived; they knew I only had less than a couple of years and I was of value in liquidating portfolios the acquirers did not want.

On the day I put in my retirement papers the Rhode Island/Boston/Jersey bank was acquired by Bank of America.  I laughed my ass off all the way to the door.  I got a nice retirement party and a full paycheck for nine months all the way to social security and three pension checks.  And I cashed in my options and shares.  It was the middle of January 2004.

Three months later JoAnn was gone.  She was 58.