On “Too Big To Fail”

Demonstrators in front of the Federal Reserve Bank of Boston

Once upon a time, maybe 35 years ago, there were lots of strong, well capitalized commercial banks. They were highly regulated and rarely failed.  And if they did fail their liquidation did not threaten the entire economy.

They had strong capital positions and low leverage (by today’s standards) of maybe 9 or 10X. A well performing bank earned 1%+ on total assets and 10%+ on equity. A billion dollar local bank had perhaps $100 million in capital and earned perhaps $10 million a year after all taxes and expenses.  They loaned out perhaps 80% of their deposit base to local or regional  customers, keeping the remaining 20% in cash and readily marketable securities. They rarely funded themselves with “hot” money. They paid solid if uninspiring dividends to the little old ladies and local businessmen who owned their stock.

There were thousands of these banks from the largest cities to the most rural area.

They operated in virtually protected franchises as hostile take-over, or virtually any take-over for that matter that didn’t involve a failing bank was not an option.

Banking regulators simply wouldn’t allow it. Branching was severely restricted by state statues, protecting smaller banks from intense competition from major metropolitan area banks.   The forerunner of Citibank was an $8 billion retail bank when I started in the mail room in 1959, was one of the nation’s largest banks and was not permitted to operate outside of New York City.  It could not open branches in upstate New York where other banks operated in protected franchises.  There was plenty of credit available and plenty of banks from which to choose. 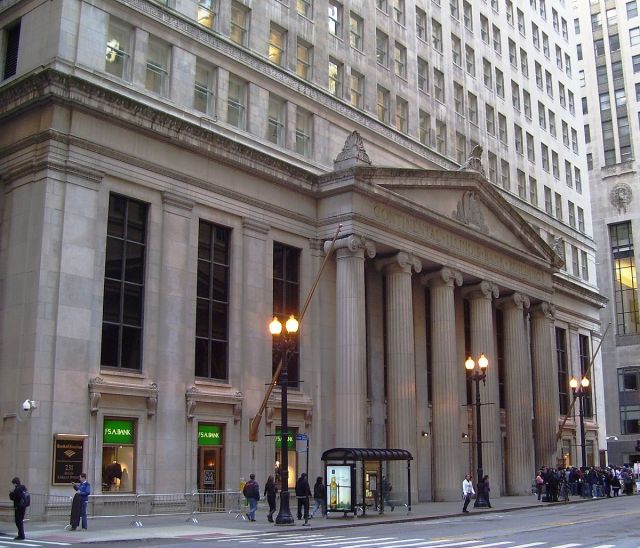 The largest commercial bank failure prior to deregulation was Continental Illinois of Chicago. Illinois was a “unit” bank state – no branches were allowed.  Continental Illinois was housed in one building in downtown Chicago.  As a result of the Illinois branch restrictions, Continental had a relatively small retail deposit base, considered the most stable.  In order to grow beyond its ability to attract stable deposits it funded itself each day in the money markets. considered a somewhat risky strategy at the time. When it ran into credit difficulties because of the Penn Square debacle its sources of funding dried up.

Penn Square was a shopping center Texas bank originating “petroleum” loans which the new Petroleum Department at Continental was eagerly buying up.  The loans all turned out to be dogs.  Continental Illinois was seized by the FDIC and liquidated. It was not too big too fail even though it was one of the largest banks in America.

The real estate crisis before the  last real estate crisis brought down a few regional banks – Republic of Dallas, Texas Commerce, Maryland National – but nothing that would threaten the stability of the banking system as a whole.  Each in turn was seized by the F.D.I.C., its assets and deposits sold off to healthy banks.

Then came deregulation beginning under Reagan with the final blow falling to Bill Clinton.

Branching and nation-wide banking came into existence. With it came the hostile take-over.  Glass-Steagell was revoked under Clinton, erasing the clear spheres of operations between commercial and investment banks.

Suddenly there was money to be made in those dowdy bank stocks.

It all began when Bank of New York put a hostile take-over offer in front of the Board of Irving Trust. Irving rejected the offer. BONY sweetened it. It was rejected again. Irving was counting of the Fed and regulators to do what they had always done – reject hostile takeovers.

But. under Reagan,  the wind of change was in the air. Wall Street smelled blood money and defeat for Irving. After battling BONY for a year Irving lost in court and the Regulators gave approval. The rout was on. Chairman Rice of Irving Trust caved the day after losing in Court and Irving was acquired. Rice immediately retired.

Larger banks began gobbling up smaller competitors by the dozens.  Venture capital funds loaded up on bank stocks with the sole goal of effecting a sale and a fat profit.

The next catastrophe was the merger of Citibank and Travelers Insurance – consummated even before Glass-Steagell was revoked.   Sandy Weill and John Reed both knew it would be – after all – the fix was in.  No commercial or investment bank was permitted to own an insurance company under the old rules.

Thus was set in motion the creation of the banking system we have today, with perhaps a dozen banks and investment banks considered “too big to fail.”

Plenty of money was made by Wall Street, bank stockholders and insiders holding shares and options. Venture funds made tons of money, the major regional banks were acquired and disappeared along with thousands of jobs.

“Growth, growth, growth!” became the mantra as regional banks rapidly (and many times imprudently) expanded desiring to have the largest market share in their state in order to attract suitors and a higher price. “Marketing” rather than credit worthiness became the norm as loans were marketed as if selling soap.

Credit insurance from AIG made it possible to shovel billions of dollars into mortgage assets without worrying about the quality of the loans themselves.  They were “packaged” into collateralized mortgage obligations, mortgage backed securities and sold to  pension funds around the nation. It was all the rage before the last crash; after all, they were insured by AIG or some other sterling counter-party and carried a Moody’s / S & P investment grade rating. The sellers and buyers of these poor quality assets turned a blind eye as the sellers paid the rating agencies and the agencies came up with the right rating.

Few saw the debacle that was to come as the mortgages defaulted at astonishing rates and the insurers could not make good on their guarantees.

Trading rooms  and investment banks moved from customer based  activities (services performed at a customer’s request)  to “own account” trading activities. After all there were enormous profits to be made especially when betting other peoples’ money.

Within all of the major banks  which got in trouble during the last banking crisis there were those who had serious doubts about how business was being conducted. “Nay-sayers”. “Old fashioned”. “Not up to date”. They were ignored. There was no money in their Cassandra prognostications; not for “business development officers”, executive management bonuses or shareholders.

What was the matter with the old system? Not much. It just wasn’t sexy. 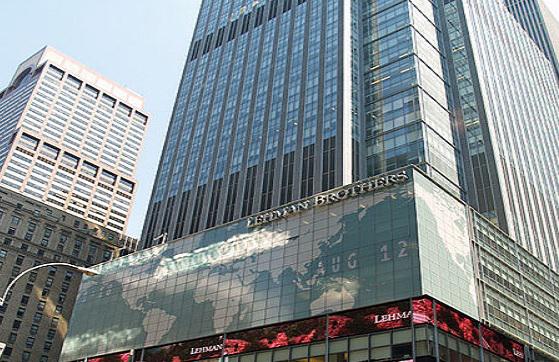 Lehman Brothers (another nice building!) . Lehman filed for bankruptcy on September 15, 2008 remains the largest bankruptcy filing in U.S. history, with Lehman holding over $600 billion in assets.

The bank had become so deeply involved in mortgage origination that it had effectively become a real estate hedge fund disguised as an investment bank. At the height of the subprime mortgage crisis, it was exceptionally vulnerable to any downturn in real estate values.  It’s collapse began a banking crisis and the idea of”too big to fail”

The bankruptcy triggered a drop in the Dow Jones of more than 500 points, the largest decline since 9/11.

Deregulation, the revocation of Glass-Steagell and the cowboy mentality of growth and consolidation brought us to where we are.  So now we have perhaps a dozen “too big to fail” financial institutions.

And next time they can’t meet their obligations they should be nationalized, taken through bankruptcy and liquidated.  That’s capitalism.

What distinguishes a successful bank?  Good loans on it’s books.

The most important thing for running a successful bank, in other words, is not originating bad loans.

That’s it. It’s not about hedging. It’s not about creating a diversified business model with credit cards and investment banking units. It’s not about making smart acquisitions. What matters is the quality of the assets that a bank originates and holds onto.

The most successful banks over the last few years have not been the universal banks like Citigroup and Bank of America. Instead, they’ve been the stodgy, old-time lenders like U.S. Bancorp. that never abandoned their focus on the principal functions of banking, gathering deposits, and writing good loans.

Today there are perhaps a ten or a dozen U.S. financial institutions considered “too big to fail” including JPMorgan, Citi, Bank of America, Bank of New York Mellon, Wells Fargo, Goldman Sachs and Morgan Stanley.

The various government agencies, including the Fed, gives these institutions and others an annual  “stress test” to determine how they would do in another massive economic downturn.  Could each survive the conditions?   The “severely adverse” scenario is called a deep recession with the unemployment rate peaking at 10%, home prices dropping 25%, and a stock market drop of nearly 60%, and a notable rise in market volatility suffered over 9 quarters.

None came through without failure or criticism in 2015.

On the other hand U.S Bancorp was “stressed” based on it’s 4th quarter 2016 balance sheet.  It not only passed, it was projected to make money and stay profitable over the projected 9 quarters of the stress scenario.  At the end of the stress the bank was still comfortably above the minimum capital requirements due to the quality of its assets.

None of this should come as a surprise to anyone familiar with U.S. Bancorp’s performance through the actual financial crisis a decade ago. Despite the fact that hundreds of banks failed during and after the crisis, and many more were forced to sell out at a discount or to egregiously dilute shareholders by issuing capital at the nadir of the crisis, U.S. Bancorp never once recorded a quarterly net loss.

In the future the government should seize those that can’t meet their obligations, take them through bankruptcy and sell off the viable pieces.

And the entire banking sector should be re-regulated.

It’s not too late.

But hey, what do I know.  I’m just a retired old crank living in Florida.

6 Responses to On “Too Big To Fail”