Tales of a Polish Woman

Christine Granville, nee Krystyna Skarbek, O.B.E., GM, Croix de Guerre, died tragically on June 15, 1952. She was a Special Operations Executive Agent during the war, celebrated for her daring and resourcefulness in intelligence and irregular warfare in Nazi occupied Poland and France. She was one of the longest serving of Britain’s wartime agents and was decorated by the King after the war.  In 1941 she began using the nom de guerre Christine Granville and adopted it with her naturalization as a British citizen in February 1947. She was 37 years old when she died.

Krystyna Skarbek, “Vesper” to her father, was born in 1908. the second child of Count Jerzy Skarbek and Stephania Goldfeder, the daughter of a wealthy Jewish banker. The Skarbeks had influenced Polish history for a thousand years, saving the country from medieval invaders and serving its royal courts’ “Krystyna inherited the self‐assuredness, patriotism and fearlessness of her ancestors. She also displayed her father’s vivacity and drive.”

Well educated, fluent in English and French, she was an avid skier and horseback rider. It was at the stables, in fact, where she first me Andrzej (Andrew) Kowerski while their respective fathers discussed horses and agriculture.  Neither she nor Andrew had any idea how their lives would eventually intertwine. Though they would continue to cross paths, there was no love between them then.

Instead, Christine married a Polish diplomat and was stationed at the embassy in Fascist-ruled Ethiopia, when Germany invaded Poland.  Rather than return to their homeland, now occupied by the Nazis, she and her husband sailed for London from South Africa — where she immediately offered her services to British intelligence. With the marriage already on the rocks, Christine and her husband eventually separated;  he emigrated to Canada and later to Mexico.

Christine then discovered that Kowerski was also in working for British Intelligence, under the name Andrew Kennedy.

They began working together, carrying out missions in Hungary and Poland, narrowly escaping capture by the Gestapo. On one occasion,  when she was stopped and questioned by Gestapo agents, Christine bit her tongue until it bled and feigned symptoms of tuberculosis.  The Gestapo got tired of her coughing blood and spittle in their direction and told her and Kowerski to go.  On a mission in Hungary, she swore to a German patrol that she was a relative of the Hungarian dictator Admiral Horthy.

While transporting a large sum of cash which she couldn’t explain, she calmly offered the money to the two security police who stopped her, bargaining for her freedom with the statement you can arrest me and your bosses will only keep the money…they took the money.  Christine and Andrew escaped through Turkey and Syria in Kowerski’s beat up Opal , making their way to British-held Cairo.

They hadn’t expected a heroes’ welcome, but they were mystified by the icy reception they received. There was a simple reason for it: the Polish government‐in‐exile in London had just ordered all ties with “amateur” resistance networks to be cut, claiming they had been penetrated by German intelligence.

This meant that the British could not send either Christine or Andrew back to Eastern Europe.  Christine handed over microfilms she’d brought from Hungary as evidence of the importance of her sources, which clearly showed the build up of German forces in advance of the imminent invasion of Russia, but they too were ignored. Having put their lives on the line for their country, they were now suspected of being Gestapo spies.

With the landings at Normandy, there was a serious need for agents in the south of France.  Christine, being fluent in French, was a natural. Now using the name Pauline Armand, she was returned to service, parachuted into France and joined the network run by a British-Belgian agent named Francis Cammaerts.

Kowerski was left behind in England while Christine assisted in linking together French and anti-fascist Italian guerillas, striking German forces in the Alps, her skiing expertise put to good use. She also contacted Polish soldiers conscripted into the German army, encouraging them to desert and join the Resistance.  She was a courier and radio operator par excellence.

At Digne, France, just days before the British landings nearby,  Cammaerts and two of his agents were arrested by the Gestapo. Christine knew the landings were coming and also knew that the three would be executed as soon as the British hit the beaches.  They would certainly be tortured to reveal what they knew; if they exposed her she, too, would arrested and executed.

Christine came up with the boldest of plans.

She walked into the office of Captain Albert Schenck, the German officer who was holding the three agents and demanded to see him in perfect English and French.  Schenck was the liason between the Gestapo and the local police.

“Who are you and what do you want?” asked the orderly.

“I am the niece of Field Marshall Bernard Montgomery and I want to see Captain Schenck. Now!”

Christine was quickly ushered into the Captain’s office.  He sat there with a stunned expression.

“I told your orderly who I am. I am General Montgomery’s niece. You know he has just landed on the coast and will be here within a day or two. I know you are holding three British agents and I am here to warn you of the consequences if any harm befalls them!”

Captain Schenck was incredulous. “How do you know that?”

“Because I too am a British agent…I have been brought here just for this mission.  How do you think I know?”

Christine brazenly continued to threaten Schenck with terrible retribution if harm came to the prisoners.  She then reinforced the threat with a mercenary appeal—an offer of two million francs for the men’s release.

Schenck did not have the authority to release the prisoners so he brought the local Gestapo agent in charge, Max Waem, into the room.

For three hours Christine argued and bargained with them and,  turning on the full force of her personality, told them that the Allies would be arriving at any moment and that she was in constant wireless contact with the British forces. To make her point, she produced some wireless crystals; useless, but they couldn’t know that for sure. All the while, Waem was holding his revolver with the butt flat on the table, pointed at Christine.

“If I were in your shoes I would give serious consideration to my proposal. My uncle will not take kindly to my husband, Francis Cammearts, being hurt in any way.”   She added the twist identifying Cammearts as her husband, and therefore a relative of General Montgomery.   ”Uncle Monty will probably execute you if you are lucky – or perhaps turn you over to the townspeople!”

Both Schenck and Waem knew the war was lost.  Increasingly alarmed by the thought of what might befall them when the Allies and the Resistance decided to avenge the many murders they had committed, Waem tapped the butt end of his revolver on the table and said, ‘If we do get them out of prison, what will you do to protect us?

“I’ll be back tomorrow with the money. Have our agents ready to go!”

That night, British intelligence parachuted two million francs to Christine, who returned to Gestapo headquarters the following day.  Cammaerts and his comrades were lead from their cells, certain they were going to be executed. They found Christine waiting in a car instead.

After Cammaerts and the other two men were released, Captain Schenck and Waem were advised to leave town. Waem did;  Schenck did not and was subsequently murdered by a person or persons unknown. His wife kept his share of the bribe money and, after the war, attempted to exchange it for new francs. She was arrested, but was released after the authorities investigated her story. She was able to exchange the money for only a tiny portion of its value. 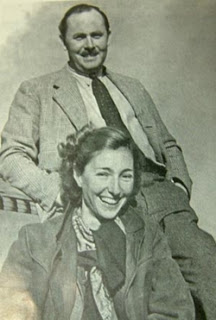 After the war Christine was awarded the George Medal, the highest award for civilian bravery.  She was also made an officer in the Order of the British Empire and decorated by the French government. With the war over, she was thanked profusely, given one month’s pay and discharged from service while in Cairo.

Christine was lost.  Her war life was over.  She could not go home to a communist Poland, so she made her way back to England and took a job as a salesgirl in Harrod’s.

And she could not find Andrew in London.

She met Ian Fleming and is purported to have carried on a year long affair with him, although there is no proof of their romantic attachment. It is said that the first of Ian Fleming’s Bond girls, Vesper Lynd (in Casino Royale),  is based on Christine.

Eventually Christine  took a job as a hostess on an ocean liner sailing regularly to South Africa.  There she met a porter, Dennis Muldowney, aboard ship. Dennis fell in love with her. She told him she wasn’t interested; she had found Andrew Kowerski, living and working in Germany. Andrew had asked her to come meet with him in Belgium..

She was going to rejoin the boy from the stables.  She knew, now, where she belonged.

The porter Dennis Muldowney followed Christine when she quit her job on the ship and moved to London. As she prepared to fly to Belgium and perhaps begin her new life, her old acquaintance began to stalk her.

The night before Christine was to leave to join Andrew, Muldowney decided that if he couldn’t possess her, no one would. He plunged a knife into Christine’s heart as she walked down the hotel stairs, killing her instantly.  The fearless girl who had faced and taken on the most dangerous and deadliest of enemies was tragically lost to a murderer she hadn’t recognized as the terrible threat he would become.

Some 200 former agents, including Andrew and Cammaerts, were at her funeral. Andrew Kowerski never married. When he died in 1988, he left instructions that his ashes be interred in Christine Granville’s grave. 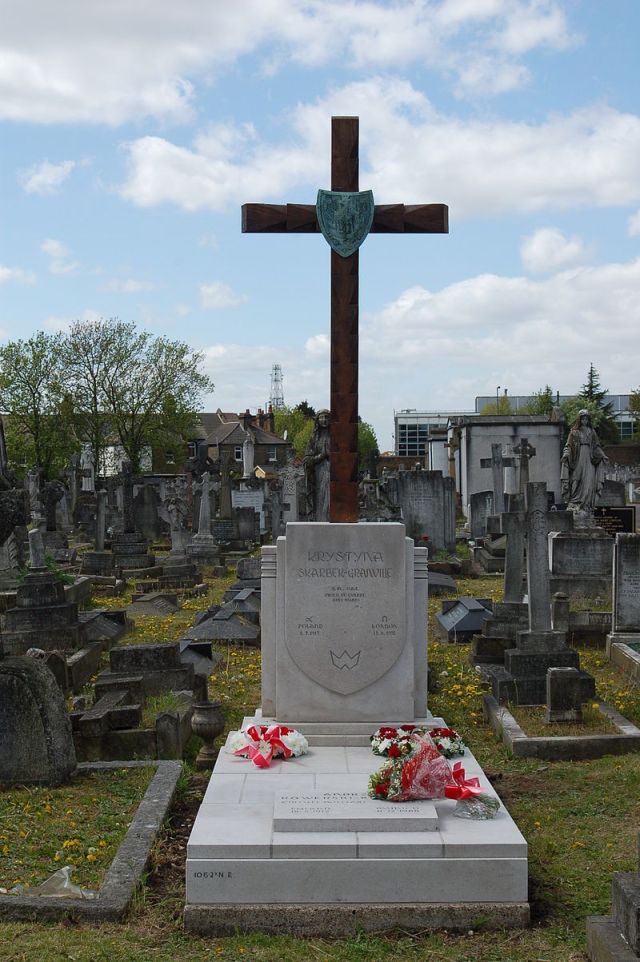 4 Responses to Tales of a Polish Woman