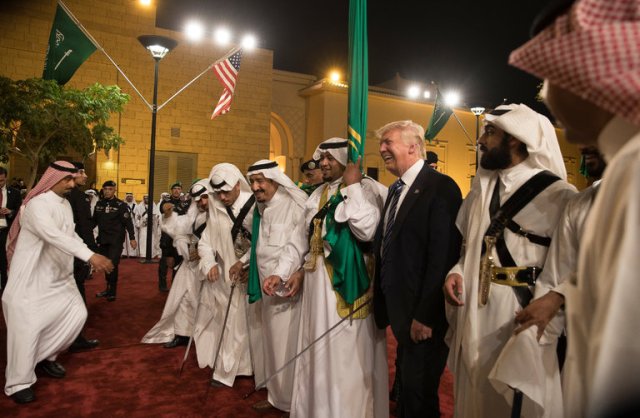 “With trumpets blaring, cannons booming and fighter jets streaking overhead trailed by red, white and blue contrails, President Trump arrived in the scorching heat of the Arabian desert on Saturday hoping to realign the politics and diplomacy of the Middle East by forcefully reasserting American support for Sunni Muslim countries and Israel against Iranân Shiite-led government.”

So said the New York Times as our illustrious President landed to a red carpet welcome from King Salman and high ranking members of the royal family.

“The Saudis treated him like royalty, with red carpets, lavish meals and American flags flying everywhere. They repeatedly used the word “historic” to describe his visit, gave him a medal, projected a multistory image of his face on the side of the palatial Ritz-Carlton hotel where he was staying, and treated him to a colorful dance display in which his staff joined in with scores of white-robed Saudis and even the president swayed back and forth.”

Trump just loves this shit.  Swaying to the Saudi sword dance with royalty; the dance probably signifies “death to the infidels!” in the local culture.  I guess the Saudis decided to forget that in 2014, before becoming a candidate for the White House, Mr. Trump wrote on Twitter: “Tell Saudi Arabia and others that we want (demand!) free oil for the next ten years or we will not protect their private Boeing 747s. Pay up!”

The Saudis like working with an American President who will not lecture them on human rights, oppressive theocratic, autocratic rule and the brutal conduct of their war in Yemen against the Shiites.

Mr. Trump announced a nearly $110 billion arms deal with Saudi Arabia ” as evidence of a renewed commitment by the United States to the security of the Persian Gulf region.”

“The package includes precision weaponry that Mr. Obama had held up over concerns that it would be used to kill civilians in the war in neighboring Yemen, as well as an antimissile system.

A forum bringing together American and Saudi corporate executives on Saturday also produced a series of multibillion-dollar deals. Among them: Lockheed Martin signed a $6 billion letter of intent to assemble 150 Black Hawk helicopters in Saudi Arabia, and General Electric.”

Trump praised his “deals” puffing how they would bring in billions in investments and “jobs, jobs, jobs.”  Just what the region needs – more weapons.  Saudi Arabia is the world’s fourth largest purchaser of arms.  Those Saudi “investments” in America flow only to arms manufacturers and the stock and treasury bill markets.

Why is a despotism like Saudi Arabia an “ally?” Because they have oil and cozy up to us to us, not because they like us but because the royal family are ensuring their own survival as rulers.  We cozy up to them because they have oil, control the country with an iron fist and besides, what the hell are they going to do with all that paper money they get from us? Put it back in the securities markets and buy weapons.  It helps finance the deficit.

So in the Muslim civil war between Sunni and Shia, Trump is backing the Sunni countries and opposing the Iranian Shiites notwithstanding that in Iraq we are supporting the majority Shia against the Sunni Isis as are the Iranians.  So seems we are on the same side in Iraq.

The Iraqi army, supported by tens of billions spent in training and weaponry and supported by air missions and heavy weapons along with on the ground U.S advisors still, after many months has not retaken Mosul from a bunch of “terrorists.”  Seems the Iraqi army can’t fight it’s way out of a paper bag.

Iran had an election last week (more than I can say for the Saudis) and re-elected its “moderate” President who wants better relations.  The Iranians are supported by Vladimir Putin and both are supporting Bashir al-Assad in the Syrian civil war.  Assad is an Alawite, a branch of Shia Islam; Alawites have been persecuted by Sunnis although there was more religious freedom in Syria than there has ever been in Saudi Arabia.

We want to replace Assad but doesn’t look like we have a candidate.  With Iranian and Russian support he is going to stay in power.

The Saudis would like us to fight their war with the Shia.  And with Isis with whom they play both sides.  Saudi money flows to Sunni Isis fighters through the weak and nebulous banking system in the U.A.E.  And the Saudis will continue this duplicity so long as Isis fighters stay away from the Kingdom.  The Saudis pay off everyone, including us.

Trump in his speech referring to “Islamic extremists” advised the Saudis to “Drive them out!”  I’m sure the Saudi listeners were inwardly smiling – they already have.

The Saudis oppose and oppress the Shia because it was what Sunnis do.  They oppose Isis because (1) the West opposes Isis and (2) the Isis leadership doesn’t think the Saudi royals are Islamic enough so while giving lips service for Western ears the money still flows to Isis so long as they stay out of Saudi Arabia.  Meanwhile U.S made Saudi aircraft attack the Shia in Yemen.  I haven’t noticed any Saudi planes over Syria lately.

So what kind of “allies” do we have in the fight against Isis?

“Saudi Arabia is an absolute monarchy. However, according to the Basic Law of Saudi Arabia adopted by royal decree in 1992, the king must comply with Sharia (Islamic law) and the Quran, while the Quran and the Sunnah (the traditions of Muhammad) are declared to be the country’s constitution. No political parties or national elections are permitted.[ The Economist rates the Saudi government as the fifth most authoritarian government out of 167 rated in its 2012 Democracy Index and Freedom House gives it its lowest “Not Free” rating.

Saudi law requires that all citizens be Muslims. Neither Saudi citizens nor guest workers have the right of freedom of religion. The religious police patrol the streets  “forbidding wrong”, enforcing dress codes, the separation of men and women, the ban on alcohol, the required daily prayers.

As of 2004 approximately half of the broadcast airtime of Saudi state television was devoted to religious issues; 90% of books published in the kingdom were on religious subjects, and most of the doctorates awarded by its universities were in Islamic studies.  In the state school system, about half of the material taught is religious. In contrast, assigned readings over twelve years of primary and secondary schooling devoted to covering the history, literature, and cultures of the non-Muslim world comes to a total of about 40 pages.

Fierce religious resistance had to be overcome to permit such innovations as paper money (in 1951), female education (1964), and television (1965) and the abolition of slavery (1962)

Because of religious restrictions, Saudi culture lacks any diversity of religious expression, buildings, annual festivals and public events. Non-Muslim festivals like Christmas and Easter are not tolerated at all, although there are nearly a million Christians as well as Hindus and Buddhists among the foreign workers. No churches, temples or other non-Muslim houses of worship are permitted in the country. Proselytizing by non-Muslims and conversion by Muslims to another religion is illegal, and as of 2014 the distribution of publications that support any other religious belief other than Islam  (such as Bibles), was reportedly punishable by death. In legal compensation court cases non-Muslim are awarded less than Muslims. Atheists are legally designated as terrorists. Saudis or foreign residents who call into question the fundamentals of the Islamic religion on which this country is based may be subject to as much as 20 years in prison.

Women are not allowed to drive and every adult woman must have a male guardian. There is little legal recourse for violence against a woman. A woman cannot travel or study or attend school without permission from a male relative. She can be divorced by her husband but cannot divorce her husband without his permission. 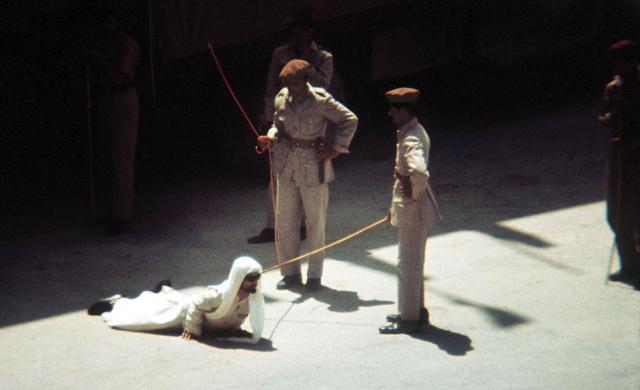 The Saudi system of justice has been criticized for its ultra-puritanical judges, who are often harsh in their sentencing, (with beheading for the crime of witchcraft), but also sometimes overly lenient, (for cases of rape or wife-beating), and slow, for example leaving thousands of abandoned women unable to secure a divorce.

Capital and physical punishments imposed by Saudi courts, such as beheading, stoning (to death), amputation, crucifixion and lashing, as well as the sheer number of executions have been strongly criticized. The death penalty can be imposed for a wide range of offences including murder, rape, armed robbery, repeated drug use, apostasy, adultery, witchcraft and sorcery and can be carried out by beheading with a sword, stoning or firing squad, followed by crucifixion. The 345 reported executions between 2007 and 2010 were all carried out by public beheading. The last reported execution for sorcery took place in September 2014. Homosexuality can bring lashing to death.

And this is among our strongest Arab allies in the region along with the rest of the Kings and Princes and Egyptian military.

Trump thought his visit was “just tremendous.”  The Saudi royals were probably laughing figuring they got away cheap.

6 Responses to Our Saudi “Allies”