On the Application of Military Power in the National Interest 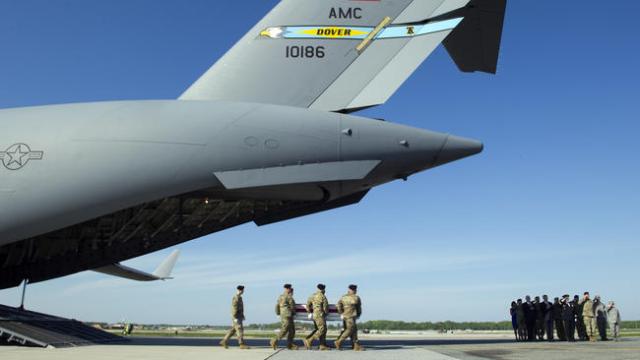 “An Army carry team moves a transfer case containing the remains of Army Sgt. Cameron Thomas, 23, of Kettering, Ohio, on April 28, 2017, at Dover Air Force Base. Thomas and Sgt. Joshua P. Rodgers, 22, of Bloomington, Ill., were killed during a raid on an Islamic State compound in eastern Afghanistan.”

O Lucius Paulus! What are we doing here
amongst these tribes bearing Rome nothing but enmity
driving us normally benevolent men
to increasing harshness?

Thick as flies
these little people
stubborn, with studied animosity
beyond all reason and human patience

Do we expect to make these people Roman?

Shall we go  home where there is peace
or shall we cross the river
to the next village or beyond the horizon
unto the end of a world so far from Rome?

.The soldiers were killed in the same place we dropped the “mother of all bombs” two weeks ago.

I was born during year four of the reign of Emperor Tiberius Claudius on the outskirts of the empire in Brooklyn. I married my high school sweetheart, the girl I took to the prom and we were together for forty years until her passing in 2004. We had four kids together and buried two together. I had a successful career in Corporate America (never got rich but made a living) and traveled the world. I am currently retired in the Tampa Bay metro area and live alone. One of my daughters is close by and one within a morning’s drive. They call their pops everyday. I try to write poetry (not very well), and about family. Occasionally I will try a historical piece relating to politics. :-)
View all posts by toritto →
This entry was posted in Poetry. Bookmark the permalink.