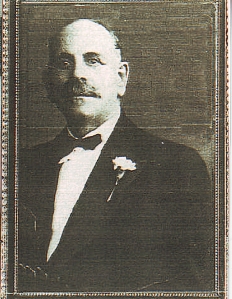 Everyone loves genealogy.  For some it borders on fanaticism; for some a hobby.  Some take a crack at learning about their ancestors and then put it aside when the trail grows cold.

I did that – tracked the male line of my ancestors back to the mid 1700s at which point any further enquiry seemed pointless.   I had names and dates of birth and locations but no other information. 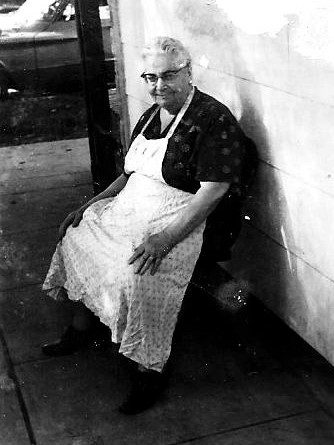 I was lucky.  I knew my paternal grandparents.  They were born in Italy and came to America in 1907.  They were born and married in a town which kept excellent records which were not destroyed during World War II.  So it was relatively easy to get their birth and marriage certificates and the names of their parents and grandparents. 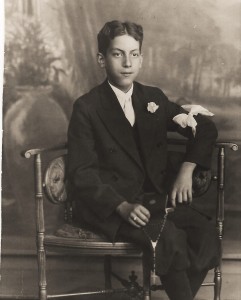 My father Domenico at his Confirmation

It wasn’t until I obtained my own father’s birth certificate that I learned that although he was born in America in 1917, he was born at home in a cold water flat on Broome Place in Manhattan.  It never occurred to me that he wasn’t born in a hospital.  I can probably safely state that I was the first of my line born in a real hospital.  Not ancient history mind you – I was born in 1942. 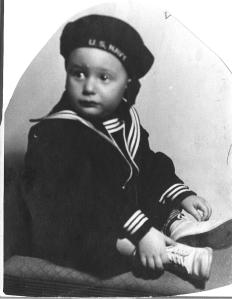 Me, doing my bit in the war years

I posted some of my ancestry on this blog; stories about my grandparents and their journey to America.   As a result I found cousins whom I didn’t know.  My father had three full brothers and a sister as well as two half brothers and a sister.  Seems by grandfather had three children in Italy when his first wife, Antonia died.  He then courted and married my grandmother Laura, came to New York with three children and then fathered five more.  Descendants of my father’s half siblings now live in Philadelphia and Texas.

Now this came about tracing only my paternal line.  My mother obviously has the same number of parents and grandparents as my father.  So I am descendant of two large family trees but know little of my mom’s line. 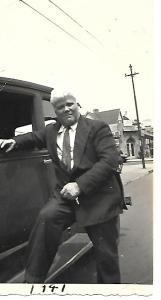 I cannot find out how my maternal grandfather entered the U.S.  There is no record of him at Ellis Island or Boston.  For all I know he jumped ship.  He was born in Italy but I know not where.

I knew he served in the U.S Army during WWW1 in France and became an American citizen; the only one of my grandparents to do so.  I wrote the Army for his records but they had been destroyed in a fire years ago.  Paper records.  His wife Antoinette, also born in Italy, died in the 1930s.  I have photo of her and nothing else.  She is buried with my parents. 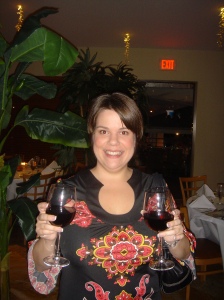 My daughter is a direct descendant of my family tree and my wife’s tree combined.  And my grandson is a combination of her tree and her husband’s combined. 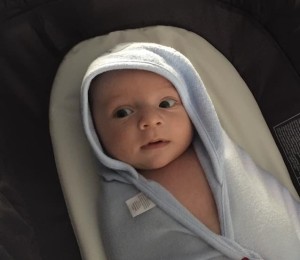 Her son, my grandson Clark Cassius

When thinking about ancestry a certain paradox immediately comes to mind.

The numbers don’t seem to add up.  The mathematics of our ancestry is exceedingly complex, because the number of our ancestors increases exponentially, not linearly. These numbers are manageable in the first few generations—two parents, four grandparents, eight great-grandparents, sixteen great-great-grandparents—but they quickly spiral out of control. Go back forty generations, or about a thousand years, and each of us theoretically has more than a trillion direct ancestors—a figure that far exceeds the total number of human beings who have ever lived.

How can that be?  Well obviously it can’t.

As family trees are linked, my daughter or my grandson for example, would we find any common ancestors among the linked trees?

In a 1999 paper titled “Recent Common Ancestors of All Present-Day Individuals,” Joseph Chang a researcher at Yale University  showed how to reconcile the potentially huge number of our ancestors with the quantities of people who actually lived in the past.

“Under the conditions laid out in his paper, the most recent common ancestor of every European today (except for recent immigrants to the Continent) was someone who lived in Europe in the surprisingly recent past—only about 600 years ago. In other words, all Europeans alive today have among their ancestral trees one man or woman who lived around 1400. That person would be in the family tree ofeveryone alive today .Before that date, according to Chang’s model, the number of ancestors common to all Europeans today increased, until, about a thousand years ago, a peculiar situation prevailed: 20 percent of the adult Europeans alive in 1000 would turn out to be the ancestors of no one living today (that is, they had no children or all their descendants eventually died childless); each of the remaining 80 percent would turn out to be a direct ancestor of every European living today.

On the other hand, research suggests that over many generations mating patterns may be much more random than expected. Social mobility accounts for part of the mixing.  At the same time, revolutions overturn established orders, countries invade and colonize other countries, and people sometimes choose mates from far away rather than from next door. Even the world’s most isolated peoples—Pacific islanders, for example—continually exchange potential mates with neighboring groups.

Chang’s model has even more dramatic implications. Because people are always migrating from continent to continent, networks of descent quickly interconnect. This means that the most recent common ancestor of all six billion people on earth today probably lived just a couple of thousand years ago.

“The same process works going forward in time; in essence every one of us who has children and whose line does not go extinct is suspended at the center of an immense genetic hourglass. Just as we are descended from most of the people alive on the planet a few thousand years ago, several thousand years hence each of us will be an ancestor of the entire human race—or of no one at all.”

“While all of this might take the thrill out of genealogical research, each path to our common past is different, and reconstructing that path, using whatever records are available, is its own reward.

I was born during year four of the reign of Emperor Tiberius Claudius on the outskirts of the empire in Brooklyn. I married my high school sweetheart, the girl I took to the prom and we were together for forty years until her passing in 2004. We had four kids together and buried two together. I had a successful career in Corporate America (never got rich but made a living) and traveled the world. I am currently retired in the Tampa Bay metro area and live alone. One of my daughters is close by and one within a morning’s drive. They call their pops everyday. I try to write poetry (not very well), and about family. Occasionally I will try a historical piece relating to politics. :-)
View all posts by toritto →
This entry was posted in family. Bookmark the permalink.

7 Responses to Charlemagne Was My Ancestor – Smiley Face Goes Here