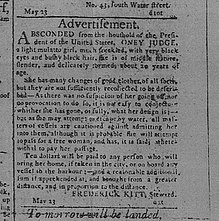 “Absconded from the household of the President of the United States, ONEY JUDGE, a light mulatto girl, much freckled, with very black eyes and bushy hair. She is of middle stature, slender, and delicately formed, about 20 years of age.

She has many changes of good clothes, of all sorts, but they are not sufficiently recollected to be described—As there was no suspicion of her going off, nor no provocation to do so, it is not easy to conjecture whither she has gone, or fully, what her design is; but as she may attempt to escape by water, all masters of vessels are cautioned against admitting her into them, although it is probable she will attempt to pass for a free woman, and has, it is said, wherewithal to pay her passage.

Ten dollars will be paid to any person who will bring her home, if taken in the city, or on board any vessel in the harbour;—and a reasonable additional sum if apprehended at, and brought from a greater distance, and in proportion to the distance.

Oney “Ona” Judge was a mixed raced slave on George Washington’s plantation at Mount Vernon, Virginia.  Born in 1773 at Mount Vernon, her mother. Betty, was an enslaved seamstress; her father, Andrew Judge, was an English tailor working as an indentured servant at Mount Vernon.

Betty had been among the 285 African slaves held by Martha Washington’s first husband, Daniel Parke Custis (1711–1757).  Custis died without a will, so his widow received a “dower share” – the lifetime use of one third of his Estate, which included at least 85 enslaved Africans.   Martha had control over these “dower” slaves, but did not have the legal power to sell or free them. Upon Martha’s marriage to George Washington in 1759, the dower slaves came with her to Mount Vernon, including Betty, Oney’s mother to be.

Under Virginia colonial law the legal status of a child was the same as that of the enslaved mother, no matter who the father was.  Because Betty was a dower slave, Oney  also was a dower slave, owned by the Custis Estate. Upon the completion of his indenture, Andrew Judge, her father settled in Alexandria, Virginia, some 11 miles away.

At about age 10, Oney was brought to live at the Mansion House at Mount Vernon, likely as a playmate for Martha Washington’s granddaughter Nelly Custis.  She eventually became the personal attendant or body servant to Martha Washington.

George Washington took Oney, then 16 years old to New York City along with six other slaves to work in the Presidential household.  All eventually moved to Philadelphia with Washington when the national capital was transferred there in 1790.

Now Pennsylvania was the first state to enact an emancipation law for all of its slaves.  In 1780 Pennsylvania required the registration of all slaves of its residents.  They would remain slaves but any of their children would be born free, resulting in gradual emancipation.  Non-residents, such as George Washington, a  slaveholder from another state could reside in Pennsylvania with his personal slaves for up to six months, but if those slaves were held in Pennsylvania beyond that deadline, the law gave them the power to free themselves.

A 1788 amendment to the state law closed loopholes – such as prohibiting a Pennsylvania slaveholder from transporting a pregnant  woman out of the state (so the child would be born enslaved) and prohibiting a non-resident slaveholder from rotating his slaves in and out of the state to prevent them from establishing the six-month Pennsylvania residency required to qualify for freedom.   This last point would affect the lives of Oney Judge and the other President’s house slaves.

Washington contended (privately) that his presence in Philadelphia was solely a consequence of the city’s being the temporary seat of the federal government. He held that he remained a resident of Virginia, and should not be bound by Pennsylvania law regarding slavery. Attorney General Edmund Randolph – misunderstood the Pennsylvania law and lost his personal slaves after they established a six-month residency and claimed their freedom.

Randolph immediately warned Washington to prevent the President’s House slaves from doing the same, advising him to interrupt their residency by sending them out of the state.  Such a rotation was a violation of the 1788 amendment, but Washington’s actions were not challenged. He continued to rotate the President’s House slaves in and out of Pennsylvania throughout his presidency. He also was careful never to spend six continuous months in Pennsylvania himself, which could be interpreted as establishing legal residency.  At least once Martha Washington took Oney to Trenton New Jersey for two days to interrupt her six month residency in Pennsylvania.

Judge fled as the Washingtons were preparing to return to Virginia for a short trip between sessions of Congress. Martha Washington had informed her that she was to be given as a wedding present to the First Lady’s granddaughter. Judge recalled in an 1845 interview:

“Whilst they were packing up to go to Virginia, I was packing to go, I didn’t know where; for I knew that if I went back to Virginia, I should never get my liberty. I had friends among the colored people of Philadelphia, had my things carried there beforehand, and left Washington’s house while they were eating dinner.”

The President of the United States wanted his slave returned.  Runaway advertisements in Philadelphia newspapers document Judge’s escape to freedom from the President’s House on May 21, 1796.

Oney was secretly placed aboard the Nancy, a ship piloted by Captain John Bowles and escaped to  Portsmouth, New Hampshire.  She may have thought she had found safe haven, but that summer she was recognized on the streets of Portsmouth by Elizabeth Langdon, the teenage daughter of N. H. Senator John Langdon and a friend of Nelly Custis. Washington knew of Judge’s whereabouts by September 1, when he wrote to Oliver Wolcott, Jr., the Secretary of the Treasury, about having her captured and returned by ship.

At Wolcott’s request, Joseph Whipple, Portsmouth’s collector of customs, interviewed Judge and reported back to him. The plan to capture her was abandoned after Whipple warned that news of an abduction could cause a riot on the docks by supporters of abolition. Whipple refused to place Judge on a ship against her will, but relayed to Wolcott her offer to return voluntarily to the Washingtons if they would guarantee to free her following their deaths.

An indignant Washington responded himself to Whipple:  “I regret that the attempt you made to restore the Girl (Oney Judge as she called herself while with us, and who, without the least provocation absconded from her Mistress) should have been attended with so little Success. To enter into such a compromise with her, as she suggested to you, is totally inadmissible, for reasons that must strike at first view: for however well disposed I might be to a gradual abolition, or even to an entire emancipation of that description of People (if the latter was in itself practicable at this moment) it would neither be politic or just to reward unfaithfulness with a premature preference [of freedom]; and thereby discontent before hand the minds of all her fellow-servants who by their steady attachments are far more deserving than herself of favor.”

Washington retired from the presidency in March 1797. His nephew, Burwell Bassett traveled to New Hampshire on business in September 1798, and tried to convince her to return. By this point she was married to a seaman named Jack Staines (who was away at sea) and was the mother of an infant.  Bassett met with her, but she refused to return to Virginia with him. Bassett was Senator Langdon’s houseguest that night, and over dinner he revealed his plan to kidnap her. This time Langdon helped Oney Judge Staines, secretly sending word for her to immediately go into hiding. Bassett returned to Virginia without her.

Washington could have used the federal courts to recover Judge Staines — the 1793 Fugitive Slave Act (which he had signed into law) required a legal process to return an escaped slave over state lines. Any court case, however, would have been part of the public record, and attracted unwelcome attention.

Interviews with Oney Judge Staines were published in the May 1845 issue of The Granite Freeman and the January 1847 issue of The Liberator, both abolitionist newspapers. They contained a wealth of details about her life. She described the Washingtons, their attempts to capture her, her opinions on slavery, her pride in having learned to read, and her strong religious faith.

When asked whether she was sorry that she left the Washingtons, since she labored so much harder after her escape than before, she said: “No, I am free, and have, I trust been made a child of God by the means.”

Oney Judge Staines was never freed but she escaped to New Hampshire and lived free.