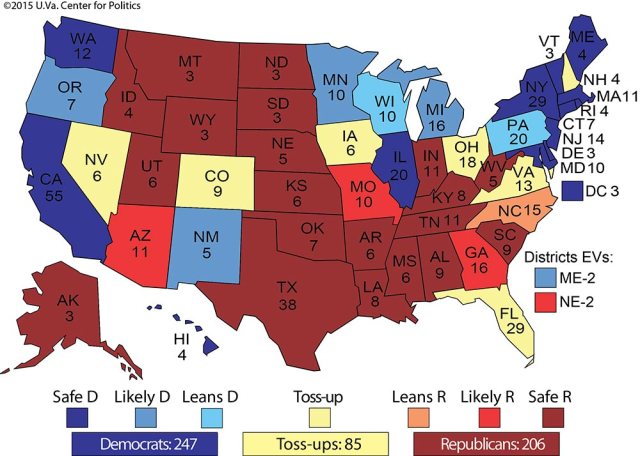 Did she go home, feel sorry for herself and fade into obscurity?  Nope.   She served the man who defeated her and then climbed back into the arena.

This convention was the best that I remember and I have seen a lot of them going back to Ike and Adlai.  It was brilliantly presented; a theatrical and strategic tour de force.  For the first time in a very long time it was the Democrats who unabashedly loved their county.  There have been no giant American flags flying at a Democratic convention in a very long time.

It was an appeal to independent voters and Republicans feeling disenchanted with where the party they have supported all of their adult lives has gone.  They know in their hearts that Donald Trump is a demagogue of the first rank; and he is not a conservative as they understand conservatism.

He is not in the mold of William F. Buckley.   He is a radical rabble rouser reducing complex issues to tweets and insults.  He is a bully.

A number of staunch Republican conservatives who have never voted for a Democrat spoke of supporting Hillary last night.  And they appealed to those who put country above party to follow them.  Vote for the GOP down ticket if you must but do not elect Donald Trump.

Sixteen years ago the conservative icon Buckley had this to say about Donald Trump:

“What about the aspirant who has a private vision to offer to the public and has the means, personal or contrived, to finance a campaign? In some cases, the vision isn’t merely a program to be adopted. It is a program that includes the visionary’s serving as President.

Look for the narcissist.

The most obvious target in today’s lineup is, of course, Donald Trump. When he looks at a glass, he is mesmerized by its reflection. If Donald Trump were shaped a little differently, he would compete for Miss America. But whatever the depths of self-enchantment, the demagogue has to say something. So what does Trump say? That he is a successful businessman and that that is what America needs in the Oval Office. There is some plausibility in this, though not much. The greatest deeds of American Presidents — midwifing the new republic; freeing the slaves; harnessing the energies and vision needed to win the Cold War — had little to do with a bottom line.”

Sixteen years ago Bill Buckley, articulate spokesman of the right for decades had Donald Trump’s number

Now I don’t think Republicans are going to vote for Hillary in droves.  The target of last night’s convention was the independent swing voter – the one who prides him or herself in “voting for the candidate, not the party.”  Also targeted was the suburban Republican, the comfortable college graduate, the fiscal conservative social liberal, many of whom wonder what has happened to their party.  Especially targeted was the suburban Republican soccer mom.

The party that they knew, loved and supported all of their lives has gone from John McCain and Mitt Romney to Trump who makes McCain and Romney look like giants among men.

Still a Hillary victory may not be easy.  Many lefties will vote for the Greens while disaffected conservatives and independents who will not vote for Hillary, not now not ever, may vote for the Libertarian candidate Gary Johnson.

Hillary has a lead among all minorities, women, young people and college educated white males.  It is among working class white males without college degrees that she trails Trump badly; a large demographic class indeed.  The path to victory for Donald Trump runs through Pennsylvania, Ohio, Wisconsin, Michigan, North Carolina and Florida.  If he can get these states in play he has a shot.

The first bus tour of the Hillary campaign runs through Ohio and Pennsylvania for a reason.  If Hillary can hold the rust belt there is virtually no path for Trump to victory.  Additionally, she is counting on her Vice Presidential pick, Tim Kaine and Joe Biden to speak with authenticity to the disaffected working man ready to throw a bomb at the establishment and that bomb is Trump.  It is very  doubtful she will win a majority of this demographic but she needs to reduce the deficit between herself and Trump.

This election has revealed new fault lines in the American electorate.  Once we spoke of red states and blue states.  Today the fault line is the white male voter and the line is demarcated by the college degree.  For the first time in 50 years, since the days of John Kennedy, a Democrat is leading among white male college graduates.  It is the working class white male lacking a college degree, the proletariat so to speak, which is heavily supporting the billionaire.  Anyone ready to provide a cogent Marxist analysis?

What is a leftie who supported the socialist Bernie to do?

Well a true adult knows, as the song goes, we don’t always get what we want.

Hillary Clinton is facing a proto-fascist narcissist demagogue IMHO.  Trump is not simply incompetent to govern; he is dangerous.  I am a German in the 1920s torn between a government I don’t like (Weimar) and a bit of a buffoon who claims to have all the answers -Adolph Hitler.

I don’t trust those who claim to have cornered the market on truth and who flatly state without equivocation “Only I can fix it!.”

“Nader-voters who spurned Democrat Al Gore to vote for Nader ended up swinging both Florida and New Hampshire to Bush in 2000. Charlie Cook, the editor of the Cook Political Report and political analyst for National Journal, called “Florida and New Hampshire” simply “the two states that Mr. Nader handed to the Bush-Cheney ticket,” when Cook was writing about “The Next Nader Effect,” in The New York Times on 9 March 2004. Cook said, “Mr. Nader, running as the Green Party nominee, cost Al Gore two states, Florida and New Hampshire, either of which would have given the vice president [Gore] a victory in 2000. In Florida, which George W. Bush carried by 537 votes, Mr. Nader received nearly 100,000 votes [nearly 200 times the size of Bush’s Florida ‘win’]. In New Hampshire, which Mr. Bush won by 7,211 votes, Mr. Nader pulled in more than 22,000 [three times the size of Bush’s ‘win’ in that state].” If either of those two states had gone instead to Gore, then Bush would have lost the 2000 election; we would never have had a U.S. President George W. Bush, and so Nader managed to turn not just one but two key toss-up states for candidate Bush, and to become the indispensable person making G.W. Bush the President of the United States — even more indispensable, and more important to Bush’s “electoral success,” than were such huge Bush financial contributors as Enron Corporation’s chief Ken Lay.”

I will not risk a Trump Presidency. I will hold my nose and vote for Hillary. Hopefully the Dems will regain control of the Senate, giving Bernie new power to shape the agenda and pressure Clinton to carry out the progressive platform she ran on.

4 Responses to The New Fault Line in America’s Electorate