The Princess and the Nerd – A Re-Post for Prom Season

Did you ever think about how you got to where you are?

Everyone does at one time or another. How did I get here to this place, this time and these circumstances. What happened? How can this be? Or perhaps, boy am I lucky!

Any life has crossroads – important moments when we must make choices. Or moments when the unexpected happens – moments when our future is determined and yet we are completely unaware of what has just happened and the life that is to come.

Bad things can happen to us. Perhaps looking back after your divorce you wonder how you made the dreadful mistake of marrying that horrid person; yet out the awful marriage you have children you adore and who adore you. You can’t picture your life without them. You look at your wedding pictures and wonder how you got from vowing everlasting love to hating each other even as you love your children beyond measure.   Would you do it all again knowing if you didn’t you wouldn’t have those kids?

Do you know when you were at the crossroads? Can you recognize the instant? Perhaps the moment you first met that now hated spouse but thought at the time he or she was cute? If you had passed him or her up you would not have married  and your life would have taken a different course – without the kids.

Everyone has that moment – it is simply not possible to recognize it at the time; nor know how it will turn out

Sometimes the moment is so innocent.  Someone in class casually asking you to a graduation party. Saying “hello” at a college Halloween party to a guy laying in a casket. A girl you have met before saying “Hi” to you as she is leaving an ice cream parlor. You didn’t remember her name but she remembered yours.

All three of the above ended in happy marriages. I guess its just as likely they might have been non-events and totally forgettable. But they were not.

Fate? As an incurable romantic sap I think love finds you when you least expect it.

Hinsch’s – Where we met.

The picture of the nerd in the Buddy Holly glasses and the laughing pretty brunette in gold is me and her at her prom in May 1963. I was 20 and she was 17. She said hello to me when I least expected it. She went back into Hinche’s Soda Shop with me and we had coffee. I had gone there that night to perhaps meet some friends and hang out.

How quaint.  Who knew that the Fates were in Brooklyn that night.

Over coffee while discussing her upcoming graduation and future plans I discovered  she had no prom date. Her boyfriend, Lou, also known as the “bread crumb king” (his family owned a bakery) had broken up with her. “Want to go to the prom? I’ll take you” says I. Another fateful moment. She barely knew me. So I arranged with her to call the next day and she would let me know. She gave me her phone number.

She made the mistake (fates again) of telling her mom and sister that some guy she knew asked her to the prom. “Go! Go!” was the response. The lucky fates were riding high.

So she said she would go with me. Her mom made the dress.

It was at the Statler Hilton (now the Pennsylvania Hotel) in Manhattan – fancy digs for a high school prom over 50 years ago. We had our picture taken.

She is laughing – because the background curtain exactly matches her homemade dress and shoes.  Perfect!  Smile!  Snap!

The instant is frozen forever in time – the princess and the nerd.

We went nightclubbing afterwards with friends – to the old Living Room where Tommy Edwards was singing (“Many a tear has to fall…but it’s all in the game!”) and the African Room where the MC, noticing her shiny blue green eyes recommended I keep plying her with liquor. Brandy Alexanders. Legal drinking age was 18 then.  “Night Clubs” fifty years ago meant small tables, intimacy, food, drinks and entertainment.  If you wanted to dance you went to a dance hall – like Birdland.   We were all danced out by the time we hit the clubs.

We rode the ferry to Staten Island then to Brooklyn (there was no Verrazano Bridge yet) – two kids kissing at the front of the boat on a warm starry night, kind of like Leo and Kate, with the skyline silhouetting us. We got my car and watched the sun rise at Plum Beach – home of the “submarine race watchers”.  Brooklyn people know where that is.

Her father was not pleased when I brought his daughter home well after sunrise.  “Well since you kept my daughter out all night you might as well come to the barbecue this afternoon!”.   It was Memorial Day weekend.  He wasn’t smiling.  But she was.

We married seven months later over frantic objections from our parents.

The instant my life was determined is in that picture – It sits on my dresser…..and now is forever memorialized in the ether of the internet.  We were together for forty years.  We had four children together and buried two together.

She will laugh eternally and I will always be the lucky nerd on whom the Fates smiled.

P.S. – Hinches Soda Shoppe closed a couple of years ago.  Before it did, my eldest daughter and I sat in the very booth where I told her of how I met her mother before we left to start our new lives in Florida. 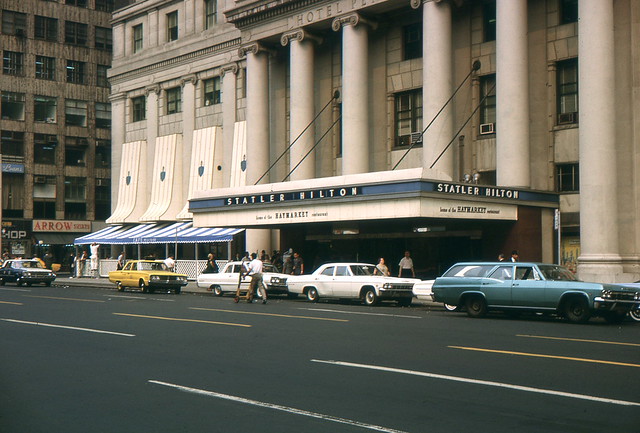 I was born during year four of the reign of Emperor Tiberius Claudius on the outskirts of the empire in Brooklyn. I married my high school sweetheart, the girl I took to the prom and we were together for forty years until her passing in 2004. We had four kids together and buried two together. I had a successful career in Corporate America (never got rich but made a living) and traveled the world. I am currently retired in the Tampa Bay metro area and live alone. One of my daughters is close by and one within a morning’s drive. They call their pops everyday. I try to write poetry (not very well), and about family. Occasionally I will try a historical piece relating to politics. :-)
View all posts by toritto →
This entry was posted in family and tagged 1963, Brooklyn, crossroads, family, life, marriage, prom, young love. Bookmark the permalink.