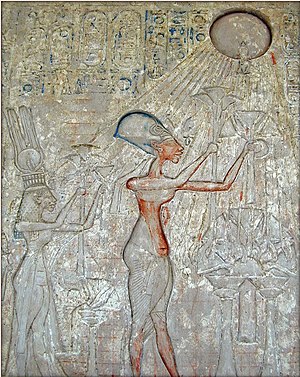 “How many are your deeds,
though hidden from sight.
O sole God without equal !
You made the Earth as You desired, You alone.
With people, cattle, and all creatures.
With everything upon Earth that walks on legs,
and all that is on high and flies with its wings.

You make all arms firm for the King,
every leg is on the move since You founded the Earth,
You rouse them for your son, who emerged from your body

the Lord of Crowns, Akhenaten, great in his lifetime.
And the great Queen whom he loves,
the Lady of the Two Lands :
Nefer-neferu-Aten Nefertiti,
who lives and is rejuvenated forever and ever.”

The above lines were written by the Pharaoh Akhenaten, originally  crowned as Amenhotep IV before he changed his name.  He was a Pharaoh of the XVIII Dynasty and the words were written in 1360 B.C.   They are just several lines of the Great Hymn to the Aten carved on the walls of Akhenaten’s capital city at Amarna.

The Great Hymn to the Aten is the longest form of one of a number of hymn-poems written to the creator god Aten and attributed to Akhenaten who radically changed traditional forms of Egyptian religion replacing them with Atenism.

Egyptologist Toby Wilkinson said that “It has been called ‘one of the most significant and splendid pieces of poetry to survive from the pre-Homeric world.'”   Egyptologist John Darnell asserts that the hymn was sung.

Crowned as  Amenhotep IV at Thebes, (present day Luxor) he changed his name to Akhenaten in the fifth year of his reign and began the abandonment of Egypt’s polytheist religion culminating in the building of a new capital city at Amarna.

It was first thought that Akhenaten’s new religion was a form of sun worship but the readings and iconography soon revealed that Akhenaten did not believe the sun was god – he believed the sun was the only visible manifestation of god to man.

Akhenaten soon forbade the open worship of the old gods, abandoned their temples, arrested their priests.  His new temples to the Aten at Amarna had no roofs, no statues, no priests of Amun  – open air to let in the light.  It was a religion without darkness.

Akhenaten issued a royal decree that the name Aten was no longer to be depicted by the hieroglyph of a solar disc emanating rays but instead had to be spelled out phonetically. Thus Akhenaten extended even further the heretical belief that Aten was not the disc or orb of the sun (the Egyptian sun god Ra) but a universal spiritual presence.  Akhenaton’s religious reforms (later regarded heretical and reverted under his successor Tutankhamun) have been described by some scholars as the earliest known example of monotheistic thought.

You who cause the sperm to grow in women,
who turns seed into people,
who causes the son to live in the womb of his mother,
who silences him in stopping him crying.
Nurse in the womb, who gives breath to cause all he has made to live,
when he goes down from the womb to breathe on the day of his birth,
you open his mouth in form,
you make his needs.
When the chick in the egg speaks in the shell,
you give it breath within to cause it to live,
you have made him, he is complete, to break out from the egg,
and he emerges from the egg to speak to his completion,
and walks on his legs, going out from it

If this were a new religion, invented to satisfy our modern scientific conceptions, we could not find a flaw in the correctness of this view of the energy of the solar system. How much Akhenaten understood, we cannot say, but he certainly bounded forward in his views and symbolism to a position which we cannot logically improve upon at the present day. Not a rag of superstition or of falsity can be found clinging to this new worship evolved out of the old Aton of Heliopolis, the sole Lord of the universe.

While it has been argued that there were monotheists among various Iron Age cultures, there is little doubt that Akhenaten was the first ruler of a major nation of the time to express a belief in monotheism and to impose it on his people -albeit briefly.

Why did he do it?  Did he believe or were there more practical political reasons involved as well?

Akhenaten professed he was the son of god, of the same substance – “begotten, not made” as us cultural Catholics would say – the son, “who emerged from your body.”  Did Jesus not profess essentially the same?

He and only he could communicate with and understand god; he was god’s representative on earth.  Further, he established a virtual trinity – god, the pharaoh and his wife – “who lives and is rejuvenated forever and ever” -responsible for the people’s salvation of earth.

The rather strange and eccentric portrayals of Akhenaten, with a sagging stomach, thick thighs, large breasts, and long, thin face — so different from the athletic norm in the portrayal of Pharaohs — have led certain Egyptologists to suppose that Akhenaten suffered some kind of genetic abnormality. Various illnesses have been put forward. On the basis of his long jaw and his feminine appearance.

Other eminent Egyptologists argue that the body-shape relates to some form of religious symbolism. Because the god Aten was referred to as “the mother and father of all humankind” it has been suggested that Akhenaten was made to look androgynous in artwork as a symbol of the androgyny of the god. This required “a symbolic gathering of all the attributes of the creator god into the physical body of the king himself”, which will “display on earth the Aten’s multiple life-giving functions”.  Akhenaten did refer to himself as “The Unique One of Re”, and he may have used his control of artistic expression to distance himself from the common people, though such a radical departure from the idealised traditional representation of the image of the Pharaoh would be truly extraordinary.

Others argue that the early deaths of XVIII Dynasty Pharaohs were likely a result of a Familial Temporal Epilepsy. This would account for the untimely death of Akhenaten, his abnormal endocrine body shape on sculptures and can also explain Akhenaten’s religious conviction due to this type of epilepsy’s association with intense spiritual visions and religiosity.

Professing monotheism, building a new capital away from the priests of Amun, banning the old gods and closing the old temples, banning the festivals, cut the people off from god.   God would no longer hear them; god only heard Akhenaten.  They must pray to him.

Sigmund Freud argued that Moses was a follower of Atenism, leaving Egypt after Akhenaten’s death to lead the Hebrews into the wilderness.  Maybe the pharaoh was not the right man for the job.

So do the modern monotheist religions borrow anything from Akhenaten?   Psalm 104 sure bears a striking resemblance to the Great Hymn.  How about the idea of a deity directing a group of people to a promised land, i.e. – the move from Thebes to Amarna?  Son of god?  Trinity?

Within a few years after his death, Akhenaten’s religion was destroyed and erased and the old gods re-established.  The old gods had been around for centuries – how to believe Osiris had become irrelevant and to that pray to Akhenaten and Nefertiti was sufficient ?

“The Amarna episode elucidates one of the dangerous characteristics of monotheism, namely the “scape-goat”-effect, dogmatism and fanaticism. In the case of Akhenaten, Amun and Osiris were the scape-goats, his exclusive Aten worship with adjacent Pharaonic exclusivity, the dogma and the more or less systematic destruction and termination of cults & festivals; the effects of fanaticism and a lack of tolerance towards existing traditions.

These themes are recurrent in Judaism, Christianity and Islam, each claiming an exclusive relationship with God.

Perhaps the wisdom of Egypt is precisely this Oriental refusal to reduce and simplify creation.”

I was born during year four of the reign of Emperor Tiberius Claudius on the outskirts of the empire in Brooklyn. I married my high school sweetheart, the girl I took to the prom and we were together for forty years until her passing in 2004. We had four kids together and buried two together. I had a successful career in Corporate America (never got rich but made a living) and traveled the world. I am currently retired in the Tampa Bay metro area and live alone. One of my daughters is close by and one within a morning’s drive. They call their pops everyday. I try to write poetry (not very well), and about family. Occasionally I will try a historical piece relating to politics. :-)
View all posts by toritto →
This entry was posted in history and tagged akhenaten, Amarna, Egypt, history, monotheism, religion. Bookmark the permalink.

4 Responses to Akhenaten – Monotheist and Scientist