The Destruction of the Aral Sea

Back in the mid-nineteenth century the Aral Sea was so large Imperial Russia began deploying naval  vessels on the lake.  Since it was a true lake the vessels had to be transported piece by piece and reassembled on the shore of Aral.  In 1851, two newly built steamers arrived from Sweden by caravan from Orenburg; since the region lacked coal, provisions were made to stockpile coal for the vessels use. 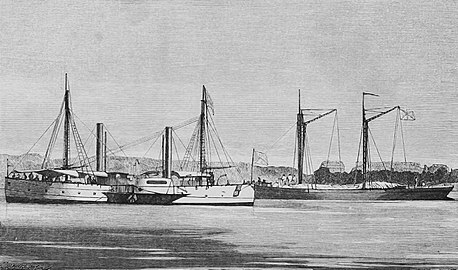 Russian scientists of the era saw the lake as a “mistake of nature” and “useless evaporation” and plans were eventually enacted to “correct nature”.  In the early 1960s, the Soviet government decided the two rivers that fed the Aral Sea, the Amu Darya in  south and the Syr Darya  in the east, would be diverted to irrigate the desert, in an attempt to grow rice, melons, cereals, and cotton.  This was part of the Soviet plan for cotton, or “white gold”, to become a major export. This temporarily succeeded, and in 1988, Uzbekistan was the world’s largest exporter of cotton.

Well the Soviet era construction of the irrigation canals was little better than the dreary apartment buildings erected to house the masses;  they leaked and wasted as much water as reached the crops and they lacked filtration systems.

Most of the sea’s water supply had been diverted, and in the 1960s, the Aral Sea began to shrink. From 1961 to 1970, the Aral’s level fell at an average of 7.9 inches a year; in the 1970s, the average rate nearly tripled to 20–24 inches per year, and by the 1980s, it continued to drop, now with a mean of 31–35 inches each year. The rate of water usage for irrigation continued to increase; the amount of water taken from the rivers doubled between 1960 and 2000, and cotton production nearly doubled in the same period.

The disappearance of the lake was no surprise to the Soviets; they expected it to happen long before. As early as 1964, Aleksandr Asarin at the Hydroproject Institute pointed out that the lake was doomed, explaining, “It was part of the five-year plans, approved by the council of ministers and the Politburo. Nobody on a lower level would dare to say a word contradicting those plans, even if it was the fate of the Aral Sea.”

In 1991 Uzbekistan obtained it’s independence from the former Soviet Union however there was no change in the Soviet policy of land exploitation.  The irrigation system continued to massively waste water through canal leakage and evaporation as the desertification process began.

Crops were not rotated and began to require massive amounts of fertilizer and pesticides which leached into the soil, polluting what remained of the lake.  By summer 2003, the South Aral Sea was vanishing faster than predicted. In the deepest parts of the sea, the bottom waters were saltier than the top, and not mixing. Thus, only the top of the sea was heated in the summer, and it evaporated faster than would otherwise.

By 2007, the sea’s area had  shrunk to 10% of its original size.  The receding sea has left huge plains covered with salt and toxic chemicals – the results of industrial projects, pesticides and fertilizer runoff – which are picked up and carried away by the wind as toxic dust and spread to the surrounding area. As a result, the land around the Aral Sea is heavily polluted, and the people living in the area are suffering from a lack of fresh water and serious health problems.

The Aral Sea fishing industry, which in its heyday had employed some 40,000 and reportedly produced one-quarter of the Soviet Union’s entire fish catch, has been devastated, and former fishing towns along the original shores have become ship graveyards.

Kazakhstan has made major efforts to revive the Aral Sea. The eight-mile Kok-Aral dam, completed in 2005 by Kazakhstan and financed by World Bank, allows water of the Syr Darya to accumulate and helps restore delta and river wetland ecosystems in the Northern Sea.   Since then, the northern part of the lake, which lies in Kazakhstan, is slowly reviving, and is now 1,300 square miles in area.  Th southern portion of Aral, which lies in Uzbekistan, has been abandoned to it’s fate.  Uzbekistan shows no interest in abandoning the Amu Darya river as an abundant source of cotton irrigation, and instead is moving toward oil exploration in the drying South Aral seabed.

And thus an immense source of fresh water disappears in the span of a lifetime.

Last July I put up a post about the dust bowl in American during the 1930’s:

“The massive corporate farms of the great plains pump water to irrigate crops from the Ogallala Aquifer, a vast underground water reservoir stretching over eight mid-western states from South Dakota to Texas.

“About 27 percent of the irrigated land in the United States overlies the aquifer, which yields about 30 percent of the ground water used for irrigation in the United States. Since 1950, agricultural irrigation has reduced the saturated volume of the aquifer by an estimated  9%. Depletion is accelerating, with 2% lost between 2001 and 2009  alone. Once depleted, the aquifer will take over 6,000 years to replenish naturally through rainfall.

The aquifer system supplies drinking water to 82 percent of the 2.3 million people (1990 census) who live within the boundaries of the High Plains study area.”

Some estimates indicate the remaining volume could be depleted as soon as 2028.”

That’s privatization and exploitation of a water resource which should belong to everyone.

Think you’re a young dude living in Chicago on the shores of Lake Michigan and by the time you are a retired old guy, the lake is gone.  Gone for profits which have been funneled into the hands of the few.

I was born during year four of the reign of Emperor Tiberius Claudius on the outskirts of the empire in Brooklyn. I married my high school sweetheart, the girl I took to the prom and we were together for forty years until her passing in 2004. We had four kids together and buried two together. I had a successful career in Corporate America (never got rich but made a living) and traveled the world. I am currently retired in the Tampa Bay metro area and live alone. One of my daughters is close by and one within a morning’s drive. They call their pops everyday. I try to write poetry (not very well), and about family. Occasionally I will try a historical piece relating to politics. :-)
View all posts by toritto →
This entry was posted in Uncategorized and tagged aralsea, corporate farming, cotton, ecodisaster, history, irrigation, kazakhstan, land exploitation, Ogallala aquifer, russia, Soviet Union, uzbekistan. Bookmark the permalink.

6 Responses to The Destruction of the Aral Sea