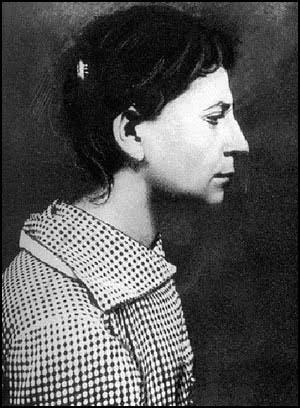 Fanya Kaplan was a poor peasant girl born in Tsarist Russia on February 10,1890.  She never went to school; what education she received she got at home.  Her four brothers and two sisters lived the same peasant life.

And she soon learned to hate her life and the Tsarist officials who treated them like the Russian dirt beneath their feet.

In her teens she became involved in radical politics, joining the Socialist Revolutionary Party and in 1906 she took part in a plot to kill a Tsarist official in Kiev.

She was arrested by the secret police and sentenced to life at hard labor in Siberia.

She spent the next eleven years in Akatoi Prison in Siberia until the abdication of Nicholas II in March 1917.  Beatings at the prison left her with seriously impaired vision.

After the abdication the new Provisional Government announced it would introduce a Constituent Assembly.  Elections were due to take place on 17th September but problems caused by the need to prepare electoral lists resulted in them being postponed until November.   The hopes of self-government unleashed by the fall of Tsarism were centered on the Constituent Assembly, a democratic parliament to draw up a democratic constitution.

Lenin and his followers, of course, jumped on that bandwagon, posing not merely as advocates of the parliament but as its only true friends. What if the voting went against them? They piously pledged themselves to abide by the popular mandate.  Pravda claimed: “As a democratic government we cannot disregard the decision of the people, even if we do not agree with it. If the peasants follow the Social Revolutionaries farther, even if they give that party a majority in the Constituent Assembly, we shall say: so be it.”

Despite the prevailing disorders and confusion, thirty-six million cast their secret ballots in parts of the country normal enough to hold elections. In most of the large centers of population, the voting was conducted under Bolshevik auspices. Yet twenty-seven of the thirty-six million votes went to other parties. A total of 703 candidates were elected to the Constituent Assembly in November, 1917. This included Socialist Revolutionaries (299), Bolsheviks (168), Mensheviks (18) and Constitutional Democratic Party (17).

The Russian people, in the freest election in modern history, voted in the majority for moderate socialism and against the Bolsheviks and the bourgeoisie.

Fanya was thrilled.  Her years of suffering had not been for naught.

And then Lenin and the Bolsheviks seized power at the barrel of a gun and closed down the duly elected Constituent Assembly.  “All power to the Soviets” made the elected parliament meaningless.

Fanya Kaplan was enraged.  She had been a revolutionary all her life fighting for an elected parliament and constitution and spent eleven years in prison. Her party had been victorious in the elections and now was closed out of power.

She decided to kill Lenin.

On August30,1918 after giving a speech in Moscow Fanya Kaplan fired three shots at Lenin as he was entering his car.   Two struck him in the neck and shoulder.

Lenin was driven back to the Kremlin by his chauffeur, and just had the strength to walk upstairs in silence to the second floor: then he fell in pain. There was great anxiety for him: the wound in the neck could have proved extremely serious; for a while it was thought that he was dying.

Fanya was shortly captured by the Cheka.   In a statement she confessed to trying to kill Lenin.

“My name is Fanya Kaplan. Today I shot at Lenin. I did it on my own. I will not say whom I obtained my revolver. I will give no details. I had resolved to kill Lenin long ago. I consider him a traitor to the Revolution. I was exiled to Akatui for participating in an assassination attempt against a Tsarist official in Kiev. I spent 11 years at hard labour. After the Revolution, I was freed. I favoured the Constituent Assembly and am still for it.”

Fanya Kaplan was executed by Pavel Malkov, a Baltic Fleet sailor, on 3rd September, 1918. He was given instructions that she was not to be buried: “her remains are to be destroyed so that not a trace remains.”

In addition to the attempted assassination of Lenin, the chief of the Petrograd secret police, Moisei Uritzky had been killed.

Trotsky  bluntly noted later  “The Socialist-Revolutionaries had killed Uritzky, had wounded Lenin seriously, and had made two attempts to blow up my train. We could not treat this lightly. Although we did not regard it from the idealistic point of view of our enemies, we appreciated the role of the individual in history. We could not close our eyes to the danger that threatened the revolution if we were to allow our enemies to shoot down, one by one, the whole leading group of our party.”

in September, 1918, Felix Dzerzhinsky, head of the Cheka, instigated the Red Terror. It is estimated that in the next few months 800 socialists were arrested and shot without trial. In the first year the official figure, almost certainly an underestimate, suggested 6,300 people were executed without trial.

The revolution was effectively over. The Tsarist dictatorship had been replaced by the dictatorship of the proletariat.

Within four years those same Baltic Fleet sailors who supported Lenin and executed Fanya Kaplan would be in open rebellion against the Bolsheviks and would be crushed by Trotsky’s Red Army at Kronstadt.

As for Lenin, the bullets could not be safely removed and he would carry them for the rest of his life.  His health was never the same and within 6 years he was dead.

I was born during year four of the reign of Emperor Tiberius Claudius on the outskirts of the empire in Brooklyn. I married my high school sweetheart, the girl I took to the prom and we were together for forty years until her passing in 2004. We had four kids together and buried two together. I had a successful career in Corporate America (never got rich but made a living) and traveled the world. I am currently retired in the Tampa Bay metro area and live alone. One of my daughters is close by and one within a morning’s drive. They call their pops everyday. I try to write poetry (not very well), and about family. Occasionally I will try a historical piece relating to politics. :-)
View all posts by toritto →
This entry was posted in history and tagged attempted assasination, baltic fleet, bolsheviks, fanya kaplan, history, kronstadt, Lenin, red terror, rssian revolution, socialsit revolutionaries, Trotsky. Bookmark the permalink.

8 Responses to Two Bullets for Lenin