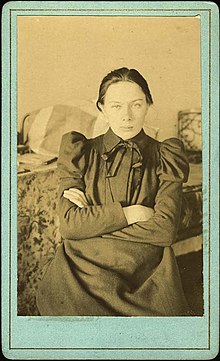 Everyone knows of Lenin.  His body is still on display in the great Kremlin square, once known as Red Square, for those with a bit of ghoulishness in their souls to see.  His name and statues have been taken down everywhere in Russia and just about everywhere else as well.  He has been written out of history kind of like Pharaoh Akhenaten’s name was chiseled off of Egyptian walls.

Yet his body is still there on display.

Yes, every one, save perhaps our current crop of high school kids drudging their way through what is euphemistically known as the public educational system, knows something of Lenin.

Few however, outside of left wingers, communists and historians know of Lenin’s wife – or even that he had a wife.

Nadezhda “Nadya” Krupskaya was Lenin’s wife – and Nadya was a revolutionary to the bone.

She was born in St. Petersburg on the 14th of February 1869 to an upper class, but impoverished family.  He father, Konstantin  Krupski was a military officer who lost favor with his superiors and was cashiered out of the service and charged with “un Russian activities”.  He may have been suspected of being involved with revolutionaries. Following this time he worked in factories or wherever he could find work.

Her mother Elizaveta was the daughter of landless Russian nobles but she had received the highest level of education available to Russian women at the time.  She worked as a governess to other noble families until she married Krupski.

Having parents who were well educated, and of aristocratic descent, combined with first hand experience with lower class working conditions probably led to the formation of many of Nadya’s ideological beliefs,   “From her very childhood Krupskaya was inspired with the spirit of protest against the ugly life around her.”

Nadya’s father died when she was nine and her mother took to giving reading lessons to the children of the well to do.  Nadya began to show a strong interest in education and as a teen read Tolstoy and his theories on education, which were fluid instead of structured. They focused on the personal development of each individual student and centered on the importance of the teacher-student relationship.

Tolstoy made a lasting impression on Krupskaya.  Tolstoy focused on doing without unneeded luxuries and servants; he focused on independence.  It is said that Nadya had “a special contempt for stylish clothes and comfort.”   She was always modest in dress, as were her furnishings in her home and office in later life.

Nadya was educated at Prince A.A. Obelensky’s Female Gymnasium, “a distinguished private girls’ secondary school in St. Petersburg”   This education was probably more liberal than most others since it was noted that some of the staff were former revolutionaries

As a devoted, lifelong student, Krupskaya began to participate in several discussion circles. These groups got together to study and discuss particular topics for the benefit of everyone involved. It was later, in one of these circles, that Krupskaya was first introduced to the theories of Karl Marx.    She wanted to know more but this was difficult since such books had been banned by the Russian government. Consequently, revolutionaries had been collecting such books and keeping them in underground libraries.

It was at one of these meetings that Nadya Krupskaya met Vladimir Ulyanov – his Lenin name was yet to come.  Krupskaya was impressed by his speeches but not his personality, at least at first. It is hard to know very much of the courtship between Lenin and Krupskaya as neither party spoke often of personal matters.

Well Ulyanov the Marxist was arrested by the Tsar’s secret police in 1896 for “un Russian activities” and Krupskaya was arrested several months later.  The Tsar Alexander III had been assassinated 18 months earlier and Tsar Nicholas was taking no chances.  Anyone with revolutionary credentials was swept off the streets.

Ulyanov was sentenced to Siberia.  He smuggled a letter to Nadya through her mother suggesting she could go with him to Siberia if she would state she was his fiancé.  Nadya was sent to Siberia as well on the condition that she marry Ulyanov within two weeks of arrival.

While in Siberia together, Ulyanov took a pen name – Lenin – perhaps after the Lena River near the camp.   Some have suggested it was Nadya’s idea.

After Siberia, Lenin left the country for Munich.  Nadya still had another year to do in Siberia.  When her sentence was over she joined him and they relocated to London.

After the revolution and the crushing of the White armies Nadya became Minister of Education of the new Soviet Union.   She involved herself personally in the issues of illiteracy and the unavailability of books for the masses.  Prior to the revolution there were no public libraries – books were for the well off who could read.  After the revolution Nadya said at a conference of librarians: “We have a laughable number of libraries, and their book stocks are even more inadequate. Their quality is terrible, the majority of the population does not know how to use them and does not even know what a library is.”

Nadya taught millions of Russians how to read.

Lenin died in 1924; his health had been decline for years since he took two bullets in an assassinatioen attempt in 1918.

In order to survive she supported Stalin over Leon Trotsky.  Did she believe Stalin was the better choice?  Probably not.  Lenin, before his death, recommended that Stalin be removed from the Central Committee and stated flatly in writing that Trotsky was the best man for the job.  Surely Nadya would have been unhappy to see Stalin raised to Lenin’s level.    All of the latter day historiography which assigned to Stalin a place alongside of Lenin could not but appear revolting and insulting to her.

Nadya Krupskaya died on February 23, 1939 – just months before the outbreak of World War II.    She had brought Soviet style education to the masses of illiterates in the space of twenty years and remained alive under Stalin.

In  his eulogy on her death Leon Trotsky wrote

“Nothing can be further from our mind than to blame Nadezhda Konstantinovna for not having been resolute enough to break openly with the bureaucracy. Political minds, far more independent than hers, vacillated, tried to play hide and seek with history – and perished. Krupskaya was to the highest degree endowed with a feeling of responsibility. Personally she was courageous enough. What she lacked was mental courage. With profound sorrow we bid farewell to the loyal companion of Lenin, to an irreproachable revolutionist and one of the most tragic figures in revolutionary history.”

I was born during year four of the reign of Emperor Tiberius Claudius on the outskirts of the empire in Brooklyn. I married my high school sweetheart, the girl I took to the prom and we were together for forty years until her passing in 2004. We had four kids together and buried two together. I had a successful career in Corporate America (never got rich but made a living) and traveled the world. I am currently retired in the Tampa Bay metro area and live alone. One of my daughters is close by and one within a morning’s drive. They call their pops everyday. I try to write poetry (not very well), and about family. Occasionally I will try a historical piece relating to politics. :-)
View all posts by toritto →
This entry was posted in history and tagged education, history, illiteracy, krupskaya, Lenin, peasants, revolution, russia, Siberia, Soviet Union, Trotsky. Bookmark the permalink.