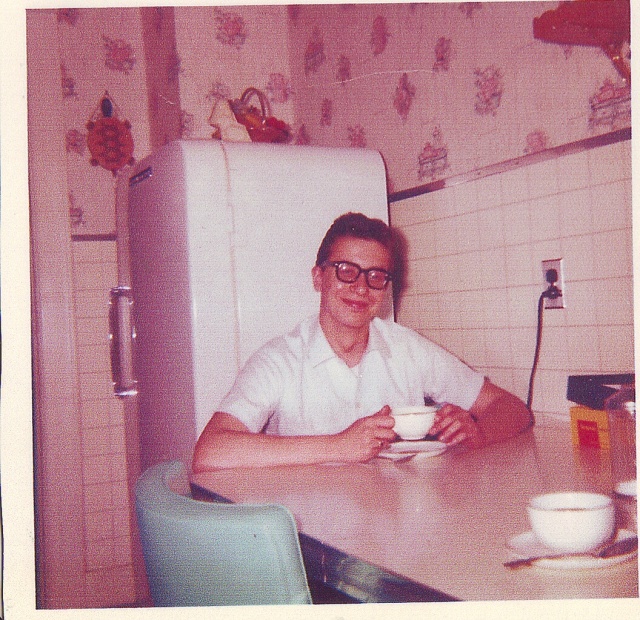 Toritto, channeling Buddy Holly, soon to be Eliza Doolittle with a cup O’joe – 1959

Toritto graduated from Lafayette High School in Brooklyn in June 1959. Lafayette was one of the crown jewels of NYC public education at the time. Graduates who worked and studied came out fully prepared for college, equipped with all the basic skills necessary. Except maybe for history. American history was sanitized. No mention of Jim Crow. Little mention of what happened to Native Americans. No mention of immigrants; like we were always here.

I graduated on a Thursday in a movie theater on 86th street in front of mom and dad. On Monday I went to work. I was 16 years old. There was no money for college.

Besides, who needed college? I had a job! A “white collar” job!

One of our neighbors on Bay 53rd Street was a Security Guard in the local branch of the First National City Bank of New York. The Bank was a 5 or 6 billion dollar institution at the time and the largest retail bank in the city. Seems my neighbor would get a $25 bonus if he recommended someone who was eventually hired and lasted the three month probation period. So my neighbor, never one to pass up an extra $25, recommended me.

So I went to the Bay 50th street station and took the West End Line into the city to 20 Exchange Place for my interview. I probably owe my success to the fact that an employee recommended me. I was pointedly told during the interview that (a) I was expected to cut my hair (I had that ‘50s pompadour hairdo popularized by The King) and (b) I was expected to dress the part – suit, white shirt and tie everyday.

I was going to work in the Incoming Mail Department! For $52 a week!

So after a trip to Robert Hall for what I thought were suitable clothes I made my way on Monday to my new white collar job. My dad laughed. He was pushing concrete around a construction site and wore the only suit he owned to weddings and funerals. He would wear a bright tie for a wedding and a black tie to funerals.

The job involved opening the mail, sorting it into 7 or 8 categories and sending it off via the “tube system” or hand delivering it. The tube system is still used occasionally at drive up windows today – one puts the transaction into a plastic container and deposits the container into a vacuum transporter which whisks the container from your car to the teller inside. Our tube system went half way to Detroit.

Delivering the mail by hand was much more educational.

First of all, clerks like me were never to speak to an officer, say an A. V. P. We only spoke to the Secretaries guarding his office, “Put it over there young man!” was the response when you clearly didn’t know the protocol.

I began to notice that there were virtually no women in the bank other than secretaries and typists. None. All the secretaries tended to be older spinster types or finishing school girls who lived alone in Manhattan, Connecticut or the Elysian fields of Northern New Jersey. Brooklyn girls were not secretary material.

I saw only one black man and he worked in the mail room with me. He was a much older man than I and he was still doing the job of a recent high school grad. He was glad to have the job. It had benefits and a pension and he supported his family with it.

I still cringe today when I think that I called him “boy” more than once. I had never met a black man face to face and I probably did what I saw in the movies. I was totally ignorant.

After I did it several times he quietly but firmly asked that I not call him that. His name was “John”. He had the dignity of my Italian father. He looked at me with a sad disapproval which conveyed to me, a teen speaking to a grown black man, that I had done something dreadfully wrong. . I never did it again.

I learned from that man over brown bag lunches of his struggles and his family’s struggles and what it meant to be a black man in America. We ate in the lunch room in the mail department – me because I had little money and John because most lunch counters on Wall Street did not welcome him.

After opening and delivering one or two million letters I decided I needed to go to college. I applied to and got into Brooklyn College at night on a trial basis. I needed two semesters with a “B” average to qualify for matriculation.

My boss in the mail room thought I had a “get ahead” attitude and got me into a training program which would allow me to spend three to six months in every major department in the Bank. It was a program designed for high school graduates “with promise” The program was run by a Connecticut Yankee who was as waspy as they come – I’ll call him Dick Smith. Dick was a V. P. in the Personnel Department (now euphemistically known as Human Resources). He was in his mid 50s, slender from tennis and wore beautifully tailored blue or grey double breasted suits to match his silvery hair and thin John Gilbert mustache. The man knew how to dress. He commuted in from the affluent suburbs, had graduated from an Ivy League school and was as far removed from Bay 53rd street as one could get and still be in the same solar system.

Dick Smith took me under his wing (he did that for 15 or 20 other trainees as well) and endeavored to teach me what I needed to know to succeed in the corporate world I was in. He subtly conveyed how to dress, appropriate speech and table manners over a monthly lunch and weekly one-on-ones. Nothing like going to the Officer’s Dining Room and looking around – then looking at yourself. The first thing he ever said to me when I sat alone with him in his office was “You don’t stick your pen in your outside suit pocket” – which is of course exactly where it was. In three years Dick Smith made a potential success out of a Coney Island kid. He checked up on my grades, helped me pick courses and followed my performance in the bank

I was living Pygmalion. I just didn’t know it at the time. Hell, I had never heard of Pygmalion. He was Henry Higgins. I was Eliza Doolittle – but he made me more confident. He also heightened my awareness of class difference – those who went to Yale and those who went to City University at night. He taught me everything I might have learned had I grown up in Greenwich.

Meanwhile the training schedule was rotating me through all the important departments in the bank. Each involved several months of doing the job.

Eventually my on the job training involved a number of months as a teller. In 1960 virtually all tellers were male. It was considered a decent job and paid enough to support a small family. I knew only two female tellers. I became a savings teller then a note teller. Note tellers in those days handled unsecured loans for doctor and lawyer types – $2,000 or $3,000 for ninety days. I was assigned to the branch on Flatbush and Church in Brooklyn.

Flatbush Branch was in a highly commercial district. Entemann’s Bakery banked at Flatbush as did Henny Youngman! I was doing fine until there were some complaints – I looked too young to the customers to be handling such important business transactions! I did look about 14.

Figuring he couldn’t make me look any older unless he penciled a mustache on my bare upper lip, Dick Smith transferred me to Kings Highway, a branch in a more residential area where my youth would charm the housewife clientele.

I left the bank for the Army in 1963. I was 21 and I wasn’t making enough money to move out on my own. It was time for me to begin taking care of myself. I knew when I left for Ft. Dix I would never return to Bay 53rd street. My father knew it too. Sons were supposed to make their own way in the world.

Dick Smith took me to lunch and said his farewells. He gave me a job when I got back four years later. He opened my eyes to what was possible as well as what was not. I spent my entire career in banking and retired as a senior officer in one of the nation’s largest financial institutions. I made a living. Not that it was easy in the era of consolidation. It wasn’t. I never returned to Bay 53rd street but I tried never to forget where I came from – and to pay it forward when I could to those making the similar journey.

All completely by chance and for a $25 bonus.

I was born during year four of the reign of Emperor Tiberius Claudius on the outskirts of the empire in Brooklyn. I married my high school sweetheart, the girl I took to the prom and we were together for forty years until her passing in 2004. We had four kids together and buried two together. I had a successful career in Corporate America (never got rich but made a living) and traveled the world. I am currently retired in the Tampa Bay metro area and live alone. One of my daughters is close by and one within a morning’s drive. They call their pops everyday. I try to write poetry (not very well), and about family. Occasionally I will try a historical piece relating to politics. :-)
View all posts by toritto →
This entry was posted in family and tagged black man in America, changing, class diference, eliza doolittle, first job, pygmalion, story, tagged 1959, wall street, women in workforce. Bookmark the permalink.

3 Responses to Being Eliza Doolittle