Super Bowls, David and the Passage of Time

All of which got me thinking about time.

David Bowie died today. God’s love be with you.  I first heard of David from a pen pal I would correspond with in London during the 1960s.

And this week my eldest daughter celebrates another birthday.  Seems like only yesterday I was dancing her about the family room to Hall and Oates’ “Rich Girl”.

And we have reached Super Bowl 50.  I can recall quite clearly watching Super Bowl I  – which wasn’t called the Super Bowl at the time.  It wasn’t until several years later that the league went from the “World Championship Game” to Super Bowl and designated numero uno retroactively.

I was 24 years old that day; my young wife was 21.  I was still in the Army and wouldn’t be discharged from active duty until November.  I was assigned near home making notifications to next of kin of New York soldiers killed in Vietnam.  I had served two years in Eritrea and was preparing for deployment to Vietnam when my mom suddenly died in ’66. She was 43.  My father had epilepsy and my brother was already in the war zone.  My dad bitched to a local congressman and I got to stay near home for the rest of my enlistment.

So on that Super Bowl Sunday we were at my wife’s parent’s house having Sunday dinner and watching the game on their brand new console color TV.  No wifi then.  No cable.  Strictly rabbit ears.  Color tv usually had either a strong red or green tint.  Your choice.

My wife and I would buy our first house before I left the Army. She had worked during my enlistment and saved my allotment checks.  The house on Staten Island was $24,500.  Ten percent down and move in.

Vince Lombardi would lead the Pack to victory over the Kansas City Chiefs in the game.  Today the winner of the Super Bowl gets the Vince Lombardi Trophy.

I could not know on that long ago Sunday that a son would be buried just a short pass from Vince.  I’m sure he’s recruited him by now.

Last week while taking down my Christmas decorations it seemed to me that I just did the same thing two weeks ago.

Why does time go faster as we age?  It doesn’t of course, but it sure seems to go faster.  Life seems to pass so much more quickly as we get older.

There are several theories for this phenomenon, common to all people. 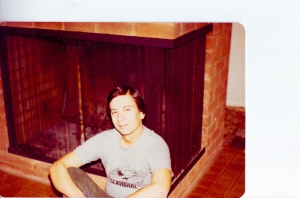 I’m not a  psychologist (so psychologist bloggers, feel free to chime in), but seems to me the best answer for this phenomenon is that the early years are full of first-time events – your first date, the birth of your first child, that first big vacation, etc. First occasions are novel events and we tend to make more detailed and lasting memories of those first times. When we repeat the event, year after year, it is less likely to make a unique or lasting impression.

That new romance? Seems like an eternity between those early telephone calls and the time you bed her, but before you know it, it’s your 20th anniversary.  When you recall your first kisses, early birthdays, your earliest summer vacations, they seem to be in slow motion.   I know when I look back on a childhood summer, it seems to have lasted forever; of course it didn’t.  That’s because when it’s the “first”, there are so many things to remember.  The memories of first time events are “dense,” 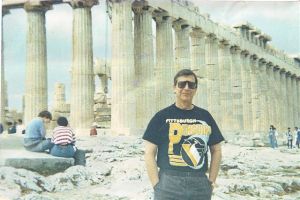 Not so with everyday life.  Repetition, like going to work everyday doesn’t make dense memories.   The first time you drive to a new job you are conscious of the time it takes.  After you do it everyday for years you no longer take notice of the time.

And time flies for old people because we do less and less new things.   We have fewer new experiences.  We no long make dense memories.

The days just slip away, one after another, and we wonder where the years went.

And so decades have gone by since that first Super Bowl and since I first heard David Bowie and danced with my baby girl to “Rich Girl”.  Before I knew it I was dancing at her wedding to the same song.

Life is like a roll of toilet paper – As you go through it the roll turns faster and faster until, in the words of my old Italian father “You know you’re old when you’re peeing on your shoes!”

Words to live by.

I was born during year four of the reign of Emperor Tiberius Claudius on the outskirts of the empire in Brooklyn. I married my high school sweetheart, the girl I took to the prom and we were together for forty years until her passing in 2004. We had four kids together and buried two together. I had a successful career in Corporate America (never got rich but made a living) and traveled the world. I am currently retired in the Tampa Bay metro area and live alone. One of my daughters is close by and one within a morning’s drive. They call their pops everyday. I try to write poetry (not very well), and about family. Occasionally I will try a historical piece relating to politics. :-)
View all posts by toritto →
This entry was posted in family and tagged aging, dense memories, dvid bowie, elderly, new experience, Super Bowl, timeflies, Vince Lombardi, youth. Bookmark the permalink.

2 Responses to Super Bowls, David and the Passage of Time