It’s January 1975 and thirty something Toritto is going on a business trip for the Great American Travel Company.

To Venice. Italy. Tough duty but someone has to do it.

Actually the company’s “Venice” office is in Mestre, a bit of an industrial town on the mainland.  At least it was at the time.  I have no intention of staying in Mestre while I’m working.  Mestre is a two dollar cab fare from Piazza Roma, where one gets a boat to Venice proper. I am staying in Venice.

I reserve a room for two weeks at the Danieli, just an alley way from Piazza San Marco.  Its January and Venice of 1975 is empty of tourists.  The tourist traps are closed.  The restaurants where the locals eat are open.  I can get an individual tour guide to see the sights.  The Teatro Finiche is in season. Yes!

The lobby of the Danieli, formerly the home of the Dandalo family.  Enrico Dandolo became Doge of Venice in 1192 and led the Fourth Crusade, sacking Constantinople in 1204.

A flight is booked for me on Aliitalia to Rome and on to Venice. Arriving in Venice I grab a cab to Piazza Roma where I catch the boat to the Danieli dock.

The hotel is beautiful.  I walk out the front door, down a lovely  little alley and emerge on Piazza San Marco, directly opposite the church.  The piazza is virtually empty, except for the pigeons.  It Is a sunny, chilly morning and its Saturday.   I have the weekend to myself.

As the strong sun warms the afternoon and burns off the fog, tables and chairs come out of the coffee houses and restaurants. 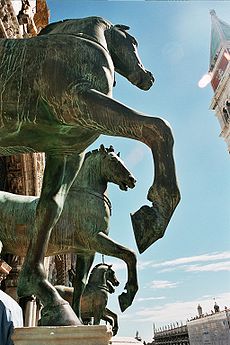 The bronze horses of Constantinople at St. Mark’s

I hire myself a private tour of San Marco, the Doge palace and the Bridge of Sighs from whence one sees a final vision of Venice before descending into the prison.  I marvel at the great bronze horses brought from the Hippodrome of Constantinople by crusaders in 1204.   That’s 1204.  The horses were already hundreds of years old at the time.  One can feel the ghosts in the great palace meeting room of the Signorie, the ruling families.   I had the whole room to myself and my footsteps echoed off the ancient walls adorned by Tintoretto and Veronese.

Scala D’Oro – The Golden Staircase to the Doge Palace

Next morning it is more great art and more things to see.  It is easy to get lost so I get a map of the streets at the front desk of the hotel.  Exploring the alleys, one stumbles upon small glorious piazzas, kids playing, laundry hanging to dry.

There are of course no cars.  Venice is a walking city.  If you get lost the advice is head for the water to get your bearings.

There us a concert on Sunday afternoon at the Teatro Finice.  (I forget the orchestra or the works performed),  The hotel desk gets me a ticket and I enter a place of wonder.  Soak up the music.  The Finiche would burn down a number of years later and be completely rebuilt as it was before the fire.

After the concert, a fine seafood feast at a place where the locals eat; finished off with almond and pistachio nut cookies and espresso.  Yum.

The day would not be complete without a night cap at Harry’s Bar.  Dewars and water where Hemingway, Toscanini, Marconi, Chaplin, Capote, Hitchcock and Orson Wells sat and drank.  Truly a zen moment..

The door way to Harry’s Bar

Monday morning it is off to work. I catch the vaporetto, the commuter boat to Piazza Roma, cruise down the grand canal and grab a cab to Mestre.  Commuting with the locals.  Priceless.

Before leaving Venice I had my picture taken in front of San Marco – a young man with longish hair.

Twenty plus years later my daughter would visit Venice, stand in the exact spot and take the same picture.  The photos are together in a frame in a special spot in my home.

And what did she bring home?   A carnival mask of a pointy beaked bird.  It sits on my dresser

I was born during year four of the reign of Emperor Tiberius Claudius on the outskirts of the empire in Brooklyn. I married my high school sweetheart, the girl I took to the prom and we were together for forty years until her passing in 2004. We had four kids together and buried two together. I had a successful career in Corporate America (never got rich but made a living) and traveled the world. I am currently retired in the Tampa Bay metro area and live alone. One of my daughters is close by and one within a morning’s drive. They call their pops everyday. I try to write poetry (not very well), and about family. Occasionally I will try a historical piece relating to politics. :-)
View all posts by toritto →
This entry was posted in travel and tagged 1975, bronze horses, Danieli, days of long hair!, Doge Palace, Harry's Bar, Mestre, St. Marks, travel, Vaporetto, Venice. Bookmark the permalink.