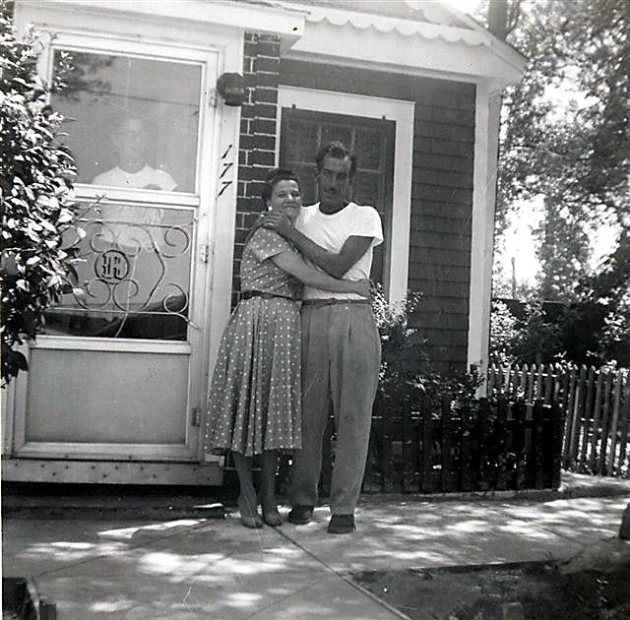 Mom and dad in front of our little bungalow, circa 1957.  The teenage ghost behind the glass is me.

My father was a union man; a member in good standing of the International Hod Carriers, Building and Common Laborers Union of America. In the 1960s the name was shortened to the Laborers International Union.

Domenico was the youngest son of Italian immigrants making their way in a new country. Everyone called him Danny. As a young man he was quite good looking in that Italian sort of way. Slender, muscular and dark with a pencil mustache.

Danny had only one problem. He had epilepsy.

He had been hit by a car as a child while riding his bicycle and suffered a head injury. At least that is what I have been told by people who would know. Maybe it is true. Maybe not.

Epilepsy was something one never talked about in those days.

The general attitude of people at the time was (a) its hereditary – or worse – contagious ; (b) it was associated with “feeble mindedness” and violence and (c) many thought those with epilepsy needed to be institutionalized.

Eugenics was all the rage in America.  Many states would not permit those with epilepsy to marry.  Missouri was the last to repeal this law in 1980!. Poppa was already gone.  Blood banks wouldn’t take your blood until 1987. Employers would fire you after the first seizure on the job. General practitioner physicians had little to offer you and patients were afraid they would be reported to the dreaded health department.

Danny had to leave school after the 8th grade because of the disease.  No epileptics allowed.

My mother warned me not to breathe a word of it to anyone – not to my friends, not at school, not to my younger brothers.

During the depression dad joined the Civilian Conservation Corps. There was no work for an Italian with an 8th grade education. It seemed like a good idea. He was sent to California to work at Yosemite – and then sent home after a seizure.

He was of course unfit for military service when war came.

By this time he had married my mother,  Mary.  She had lived across the street with her 4 brothers and sisters. Her mother died and the State in it’s wisdom would not permit an Italian immigrant with no wife to raise five children.  She was made a ward of the state and sent to an orphanage run by the Convent of the Hold Rosary on the upper east side of Manhattan.  She never talked about it – I found out examining the 1940 census.

When she turned 18, high school diploma in hand,  she had to leave the orphanage so she returned home with her little suitcase. Her father, my maternal grandfather had remarried and was not interested in taking his grown children in – even temporarily.  My mom had a few bucks, no job and couldn’t drive.  My father’s mother, Grandma Laura took her in off of the streets when she saw her sitting on the curb.

Love blossomed and Danny and Mary married in November 1941.

Danny now had responsibilities. The primary issue was how to make a living.

He had no education.  He had no health insurance nor the money to see a neuro-specialist. Our local Italian pharmacist gave him Dilantin and Phenobarbitol without prescription which poppa took everyday. Many times as a kid I picked up his drugs. Nobody would suspect a kid.

Eventually he got a job; the only job he could get;  a job as a common laborer, pushing a wheel barrow eight hours a day for an Italian owned construction company. A few months after starting work he joined the union.  He carried cement and mortar from the mixers to the brick layers. Nothing but brawn and sweat. No brains required. No thinking required. Just the labor of a poor man with a wife and eventually three sons.  His bosses knew he had epilepsy.

He did the work everyday his working life. He went to work rain or shine.  If it rained he came home. You didn’t get paid when you didn’t work. Many weeks in Winter he had no work.

Union membership came with health benefits.  He got his epilepsy under reasonable control – I only saw him have two more seizures all of his life.

When we needed a bigger apartment with the birth of my youngest brother we rented a small house.  Several years later the owner wanted it for his own son.  We moved.

Poppa was able to buy us a two bedroom “bungalow” on the fringes of Coney Island – on a dirt street.  I slept on a Castro Convertible in the living room while my two brothers shared a tiny bedroom in bunk beds.

Poppa paid $5,000 for the house. The former owners held the mortgage privately.  It wasn’t much of a house even by standards of the day but we always had a roof over our heads and food on our table and serviceable clothes to wear.  We always had the necessities of life.  No vacations.  No fancy car – a ’51 blue Chevy.  Hand me down clothes.   But poppa made sure we were never hungry or homeless.

He was able to shelter, clothe and raise a family on what he was able to earn himself.  Mom was always home for us.  He was paid a living wage for his sweat.  The owners still made plenty of money as did their competitors, the Trumps who also were building low-mid rise apartment buildings all over Brooklyn and Queens.

The father of our latest Presidential candidate, Donald Trump paid union wages and still left a fortune of $400 million to Donald and his siblings.  Tough start in life.

And poppa was able to make his way in the world only because he was a union man. He had a dignity and pride in his work and would point out apartment buildings and projects that he had worked on if we passed them on a Sunday drive.

He never considered his work demeaning or of no consequence – his sweat mark is still everywhere in Bensonhurst and Flushing.  His work had a dignity of its own because a union wage allowed him to care for those he loved.

He never felt like a slave.  He was a worker and was never ashamed of what he did or what he was.  And he knew what he was.  He wasn’t “middle class” or “white collar”.  He had no way to make a living but to sell his labor.  He knew he was a worker and in solidarity with all others who had no accumulated wealth to live on.  But because he earned a living wage he had dignity.

It was all he ever wanted.  A fair wage, a little house, an education and a future for his children; a comfortable old age.

He could look forward to a union pension when he retired as well as social security.  He never made it.  He died at 56 from emphysema – probably from all of those years breathing in cement dust.

His two remaining living sons wound up bankers and Wall Streeters – but we never forgot from whence we came – and  all the others now making the journey.  I spent this last weekend with my brother; he will be 69 in a couple of months and still trudges down to Wall Street everyday.

A living wage gives dignity to work and to the men and women who toil at those “menial”  jobs.  It gives them the self respect to look you in the eye without shame, knowing they too can care for their own.  If you can support your family or support yourself on what you earn, the job is no longer by definition “menial”

Don’t say we don’t have the money.  We know where the money is.

My dad’s proudest achievement aside from his marriage to my mom and his three sons was that he and his older brother Angelo helped build the United Nations complex – which he viewed as a monument to those who sweated in its construction.    They made their little contribution to something they knew was important; something they knew would last.

Whenever I passed it I thought of them.

And although I haven’t been to F.D.R. Drive in years I would like to assure them.

Poppa with a beer at my First Communion party with his brother Angelo and our youngest brother Nicholas – all gone.

I was born during year four of the reign of Emperor Tiberius Claudius on the outskirts of the empire in Brooklyn. I married my high school sweetheart, the girl I took to the prom and we were together for forty years until her passing in 2004. We had four kids together and buried two together. I had a successful career in Corporate America (never got rich but made a living) and traveled the world. I am currently retired in the Tampa Bay metro area and live alone. One of my daughters is close by and one within a morning’s drive. They call their pops everyday. I try to write poetry (not very well), and about family. Occasionally I will try a historical piece relating to politics. :-)
View all posts by toritto →
This entry was posted in family and tagged Brooklyn, common laborer, d Bensonhurst, dignity, dignity of work, Donald Trump, epilepsy, eugenics, family history, Flushing, hod carrier, living wage, Trump, union. Bookmark the permalink.