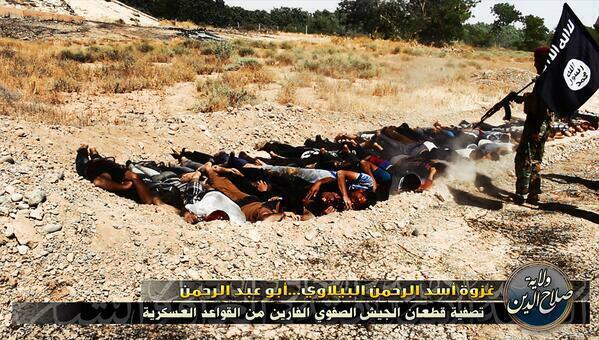 A couple of days ago three “straight A” teenage girls, two 15 and a 16 year old, in the U.K. boarded a plane at Gatwick and headed off to Turkey, indicating that they were on their way to Syria to join ISIS.

This has set off a round of breast beating among British liberals. How could this happen? Who is to blame?

Meanwhile British anti-terrorist squads and Turkish police are combing the Syrian border areas trying to save the young darlings.

All three girls left their homes at 8am on February 17 and met at Gatwick Airport, where they boarded a Turkish Airlines flight to Istanbul.

We can always blame Twitter.  One of the girls had over 90 Twitter connections with terrorist groups.  Twitter helped these girls connect with other gleeful fans of snuff-video beheading, cage-burning and the hobby sport of hurling gay men to their deaths from towers. Let’s blame Twitter.

“Some people must be wondering if the parents are to blame. They appeared on TV this week, some clutching teddy bears belonging to their little blossoms, presenting them as easily confused delicate ingenues. This differed, to my mind, from the cool-headed, elegantly pulled together, determined young women I’d watched the footage of on CCTV. Not silly kids wagging off school, but calm, considered, A-grade students who have researched their trip, found hundreds of pounds in funds, booked flights and headed towards earth’s closest vision of actual hell.”

The families are adamant that there were no signs that their daughters were plotting. Two of the fathers interviewed on British T.V. were holding the teddy bears of their little girls. One would like to ask what exactly was the turning point which drove the three teen-babies to rush off to join the killers in such a hurry that they forgot their stuffed toys. My mom and her KGB friends knew what I was doing at 15 before I did.

Of course, there’s a strong case to be made that fleeing abroad in search of Isis is simply a severe case of teen rebellion. I guess when they come home from a couple of years of aiding and abetting murder all will be forgiven? I wore a leather jacket like Marlon Brando and combed my hair like Elvis. And we thought we were bad.

“If the sight of gay men plummeting to their deaths excited you so much that you went and spent five years aiding and abetting the homophobic carnage, forgive me, but I don’t want to come across you in Bethnal Green Tesco Metro. I can’t imagine that time spent hanging out with horror-movie ghouls who hate Britain, gays, democracy, the rights of women and religious freedom will have done much good for your personal development.” So says Grace Dent, writing in the Independent.

So what is ISIS offering to entice these silly little girls? I mean, was it the beheadings? The crucifixion of Christians in Raqqa? The reports from Kobani of raped and mutilated six year old female corpses in the streets? The image of a submissive Jihadi bride to a big, strong executioner boy friend?

I recently read an in-depth coherent article on what ISIS is and what it offers some:

While in the past year, President Obama has referred to the Islamic State, variously, as “not Islamic” and as al-Qaeda’s “jayvee team”, author Graeme Wood argues that, on the contrary,  ISIS is not only Islamic, it is very Islamic – in the most medieval tradition. Failure to understand the differences between Al-Qaeda and ISIS will lead to serious strategic errors by the United States in combating ISIS.

Think Christians who not only believe, take every word literally but then implement every word – from stoning for adultery to keeping slaves to killing idolaters while preparing for the Apocalypse.

“If al-Qaeda wanted to revive slavery, it never said so. And why would it? Silence on slavery probably reflected strategic thinking, with public sympathies in mind: when the Islamic State began enslaving people, even some of its supporters balked.

Nonetheless, the caliphate has continued to embrace slavery and crucifixion without apology. “We will conquer your Rome, break your crosses, and enslave your women,” Adnani, the spokesman, promised in one of his periodic valentines to the West. “If we do not reach that time, then our children and grandchildren will reach it, and they will sell your sons as slaves at the slave market.”

So as Grace Dent said in the Independent: “I’d go as far as to say you shouldn’t be allowed back into the country ever, when surely there are dozens of other bloodier, more depressing places that suit your lifestyle choice better. However, I’ve asked my liberal friends what we should do and they all wring their hands and say after some mumbling, “Nothing.”

So give me a call when you’re bored with all the stoning, crucifying and beheading. I’ll meet you at Heathrow Arrivals with your teddy.”

And these folks haven’t had their pasports revoked yet.  You know.

I was born during year four of the reign of Emperor Tiberius Claudius on the outskirts of the empire in Brooklyn. I married my high school sweetheart, the girl I took to the prom and we were together for forty years until her passing in 2004. We had four kids together and buried two together. I had a successful career in Corporate America (never got rich but made a living) and traveled the world. I am currently retired in the Tampa Bay metro area and live alone. One of my daughters is close by and one within a morning’s drive. They call their pops everyday. I try to write poetry (not very well), and about family. Occasionally I will try a historical piece relating to politics. :-)
View all posts by toritto →
This entry was posted in Uncategorized and tagged atrocities, Britain, fangirls, isis, Islamic State, runaway teen girls, syria, terrorism, Turkey, twitter. Bookmark the permalink.