It’s 1994 and the Great American Travel Company sends me off to Athens to take a look at local operations. I haven’t been to Greece since 1966; Athens was a stop on my way to or from Eritrea. I would usually spend a day or two in the city prior to departing to Asmara.

It’s Summer and Athens is hot.

It gets so bad that traffic into downtown is restricted daily to odd or even numbered license plates.

There will be the usual work routine, dinner with colleagues and free weekends to explore. On the roof of my hotel is a restaurant, open during pleasant weather, with a gorgeous view of the Acropolis. Breakfast with a view.

The hotel operates a bus into downtown because of car restrictions which I take daily to the drop off point from where I can walk to the office. It is across the street from the National Archeological Museum.

During the weekend I stroll the city, explore the Temple of Olympian Zeus, the Agora and of course the Acropolis. A great deal of rehabilitation had been done since I last walked the ground of the iconic building. I always find myself a comfortable place to sit, contemplate and enjoy the moment.

Absorbing the moment is a key to living. I am always aware that I will probably not pass this way again. A picture of the moment,, a cup of coffee and a Macanudo Ascot properly memorializes such special times in life.

So tonight it’s dinner with Greek friends at a nice restaurant. Their English is excellent, the food and ouzo perfect and we relax.

“What’s the big deal about the Republic of Macedonia?”

You think the stupid foreigner had burned the Greek flag in front of the Parliament building!

As background, Yugoslavia had broken up into a number of countries and one of these called itself the “Republic of Macedonia”. Greeks were enraged.

And stupid me lit the match.

“Not Acceptable! It borders our Northern province of Macedonia and means they have territorial ambitions! Macedonia is Greek!!”

Because of the hubbub the new country was admitted to the U.N. as “The Former Yugoslav Republic of Macedonia” while Greece and Macedonia worked it out. Currently, Greece and The Former Yugoslav Republic of Macedonia are still trying to work it out and a thoroughly exasperated U.N. has agreed to accept any resolution worked out by the two countries. The issue has been on-going for 20 years although Greece and T. F. Y. R. O. M have excellent diplomatic and trade relations.

The now more ouzo than coffee conversation went “downhill” from there.

We moved to a comfy bar.

“The Turks burned Smyrna and expelled the Greeks” (in 1922), “the Turks invaded Cyprus” and “Constantinople is Greek!” (ehh…you mean Istanbul?  Not Greek since 1453).

The American is muttering to himself, the ouzo is flowing and we drank on talking of ancient slights, grievances and insults.

I learned something over the ouzo bottles – peoples have long memories.

And obsessing over past wrongs is not good for the soul. It is corrosive.

“After all”, I pointed out, “no Turk alive is responsible for burning Smyrna. And weren’t Greek armies fighting Turks in Anatolia at the time. And what of the Turkish expulsion from Salonika?”

Grumbling. A grudging agreement – sort of,

“But the Serbs still mourn their defeat at the hands of the Turks on the Field of Blackbirds!” ( in 1389!) “There is Serb blood on that field!”.

Unfortunately today the field is in Kosovo.

I stand up from the table  my ouzo in hand.

“Anyone here a Serb? Anyone in this bar a Serb?”

“And the Turks invaded Cyprus!”

“Not till the Greek Colonels moved to annex it.”

And so it went. Grievances…..and blinders.

“Ah you Americans have no history yet! You wait!”

Americans have a short history compared to Greeks. And Turks. Maybe when we are a couple of thousand years old, if we get that far, we too might have age old grievances. Certainly our history with Native Americans and slavery created legitimate grievances against us. I like to think however we do not wear blinders.

Having solved the regional problems over ouzo, the drunks finally went home.

So sometime during the following workweek I catch the hotel bus at the downtown stop to carry me back to my temporary abode.

He begins to tell me of his niece who has gone to America to study. “Bright girl. Going to college in America!’

“But my brother was not going to send her off to live alone!”

Can’t have her living that American college dorm life.

“She is living with our brother Niko and his family”.

“In Tarpon Springs?” I asked.

Largest percentage of Greeks of any city in America and less than 20 miles from where I live.

His eyes lite up. Biggest smile I’ve seen in Greece.

Oh yes. Americans can be so smart. 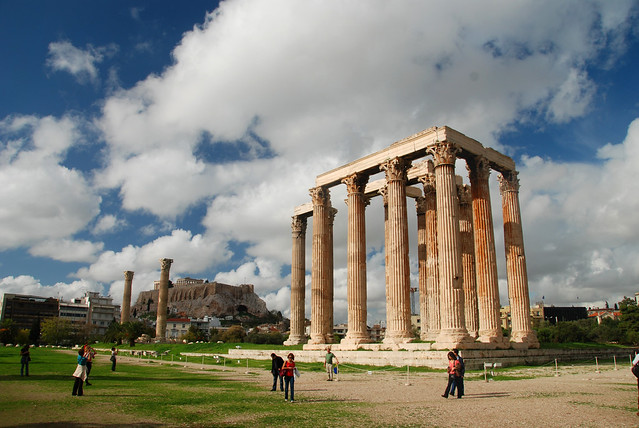 I was born during year four of the reign of Emperor Tiberius Claudius on the outskirts of the empire in Brooklyn. I married my high school sweetheart, the girl I took to the prom and we were together for forty years until her passing in 2004. We had four kids together and buried two together. I had a successful career in Corporate America (never got rich but made a living) and traveled the world. I am currently retired in the Tampa Bay metro area and live alone. One of my daughters is close by and one within a morning’s drive. They call their pops everyday. I try to write poetry (not very well), and about family. Occasionally I will try a historical piece relating to politics. :-)
View all posts by toritto →
This entry was posted in family and tagged Athens, business travel, Cyprus, faux pas, Greece, grievances, Macedonia, ouzo, Serbs, smog, Tarpon Springs, Turkey. Bookmark the permalink.